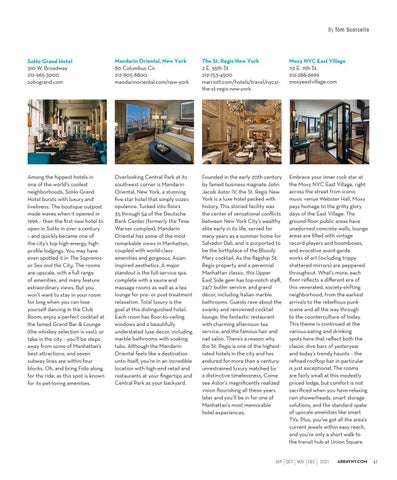 Among the hippest hotels in one of the world’s coolest neighborhoods, SoHo Grand Hotel bursts with luxury and liveliness. The boutique outpost made waves when it opened in 1996 – then the first new hotel to open in SoHo in over a century – and quickly became one of the city’s top high-energy, highprofile lodgings. You may have even spotted it in The Sopranos or Sex and the City. The rooms are upscale, with a full range of amenities, and many feature extraordinary views. But you won’t want to stay in your room for long when you can lose yourself dancing in the Club Room, enjoy a perfect cocktail at the famed Grand Bar &amp; Lounge (the whiskey selection is vast), or take in the city – you’ll be steps away from some of Manhattan’s best attractions, and seven subway lines are within four blocks. Oh, and bring Fido along for the ride, as this spot is known for its pet-loving amenities.

Overlooking Central Park at its southwest corner is Mandarin Oriental, New York, a stunning five-star hotel that simply oozes opulence. Tucked into floors 35 through 54 of the Deutsche Bank Center (formerly the Time Warner complex), Mandarin Oriental has some of the most remarkable views in Manhattan, coupled with world-class amenities and gorgeous, Asianinspired aesthetics. A major standout is the full-service spa, complete with a sauna and massage rooms as well as a tea lounge for pre- or post-treatment relaxation. Total luxury is the goal at this distinguished hotel. Each room has floor-to-ceiling windows and a beautifully understated luxe decor, including marble bathrooms with soaking tubs. Although the Mandarin Oriental feels like a destination unto itself, you’re in an incredible location with high-end retail and restaurants at your fingertips and Central Park as your backyard.

Founded in the early 20th century by famed business magnate John Jacob Astor IV, the St. Regis New York is a luxe hotel packed with history. This storied facility was the center of sensational conflicts between New York City’s wealthy elite early in its life, served for many years as a summer home for Salvador Dali, and is purported to be the birthplace of the Bloody Mary cocktail. As the flagship St. Regis property and a perennial Manhattan classic, this Upper East Side gem has top-notch staff, 24/7 butler service, and grand décor, including Italian marble bathrooms. Guests rave about the swanky and renowned cocktail lounge, the fantastic restaurant with charming afternoon tea service, and the famous hair and nail salon. There’s a reason why the St. Regis is one of the highestrated hotels in the city and has endured for more than a century: unrestrained luxury matched by a distinctive timelessness. Come see Astor’s magnificently realized vision flourishing all these years later and you’ll be in for one of Manhattan’s most memorable hotel experiences.

Embrace your inner rock star at the Moxy NYC East Village, right across the street from iconic music venue Webster Hall. Moxy pays homage to the gritty glory days of the East Village: The ground-floor public areas have unadorned concrete walls, lounge areas are filled with vintage record players and boomboxes, and evocative avant-garde works of art (including trippy shattered mirrors) are peppered throughout. What’s more, each floor reflects a different era of this venerated, society-shifting neighborhood, from the earliest arrivals to the rebellious punk scene and all the way through to the counterculture of today. This theme is continued at the various eating and drinking spots here that reflect both the classic dive bars of yesteryear and today’s trendy haunts – the refined rooftop bar in particular is just exceptional. The rooms are fairly small at this modestly priced lodge, but comfort is not sacrificed when you have relaxing rain showerheads, smart storage solutions, and the standard spate of upscale amenities like smart TVs. Plus, you’ve got all the area’s current jewels within easy reach, and you’re only a short walk to the transit hub at Union Square.

Array Magazine - Fall 2021. ARRAY Magazine brings the most interesting people, places and ideas in interior design into the homes and offices of both design professionals and consumers, featuring the best of the New York Design Center at 200 Lex.