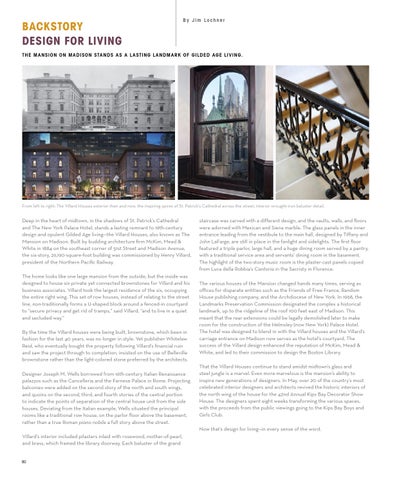 T he Mansion on Madison stands as a lasting landmark of Gilded Age living .

From left to right: The Villard Houses exterior then and now; the inspiring spires of St. Patrick's Cathedral across the street; interior wrought-iron baluster detail.

Deep in the heart of midtown, in the shadows of St. Patrick’s Cathedral and The New York Palace Hotel, stands a lasting remnant to 19th-century design and opulent Gilded Age living—the Villard Houses, also known as The Mansion on Madison. Built by budding architecture firm McKim, Mead & White in 1884 on the southeast corner of 51st Street and Madison Avenue, the six-story, 26,190-square-foot building was commissioned by Henry Villard, president of the Northern Pacific Railway. The home looks like one large mansion from the outside, but the inside was designed to house six private yet connected brownstones for Villard and his business associates. Villard took the largest residence of the six, occupying the entire right wing. This set of row houses, instead of relating to the street line, non-traditionally forms a U-shaped block around a fenced-in courtyard to “secure privacy and get rid of tramps,” said Villard, “and to live in a quiet and secluded way.” By the time the Villard houses were being built, brownstone, which been in fashion for the last 40 years, was no longer in style. Yet publisher Whitelaw Reid, who eventually bought the property following Villard’s financial ruin and saw the project through to completion, insisted on the use of Belleville brownstone rather than the light-colored stone preferred by the architects. Designer Joseph M. Wells borrowed from 16th-century Italian Renaissance palazzos such as the Cancelleria and the Farnese Palace in Rome. Projecting balconies were added on the second story of the north and south wings, and quoins on the second, third, and fourth stories of the central portion to indicate the points of separation of the central house unit from the side houses. Deviating from the Italian example, Wells situated the principal rooms like a traditional row house, on the parlor floor above the basement, rather than a true Roman piano nobile a full story above the street.

staircase was carved with a different design, and the vaults, walls, and floors were adorned with Mexican and Siena marble. The glass panels in the inner entrance leading from the vestibule to the main hall, designed by Tiffany and John LaFarge, are still in place in the fanlight and sidelights. The first floor featured a triple parlor, large hall, and a huge dining room served by a pantry, with a traditional service area and servants’ dining room in the basement. The highlight of the two-story music room is the plaster-cast panels copied from Luca della Robbia’s Cantoria in the Sacristy in Florence. The various houses of the Mansion changed hands many times, serving as offices for disparate entities such as the Friends of Free France, Random House publishing company, and the Archdiocese of New York. In 1968, the Landmarks Preservation Commission designated the complex a historical landmark, up to the ridgeline of the roof 100 feet east of Madison. This meant that the rear extensions could be legally demolished later to make room for the construction of the Helmsley (now New York) Palace Hotel. The hotel was designed to blend in with the Villard houses and the Villard’s carriage entrance on Madison now serves as the hotel’s courtyard. The success of the Villard design enhanced the reputation of McKim, Mead & White, and led to their commission to design the Boston Library. That the Villard Houses continue to stand amidst midtown’s glass and steel jungle is a marvel. Even more marvelous is the mansion’s ability to inspire new generations of designers. In May, over 20 of the country’s most celebrated interior designers and architects revived the historic interiors of the north wing of the house for the 42nd Annual Kips Bay Decorator Show House. The designers spent eight weeks transforming the various spaces, with the proceeds from the public viewings going to the Kips Bay Boys and Girls Club. Now that’s design for living—in every sense of the word.

Villard’s interior included pilasters inlaid with rosewood, mother-of-pearl, and brass, which framed the library doorway. Each baluster of the grand 80