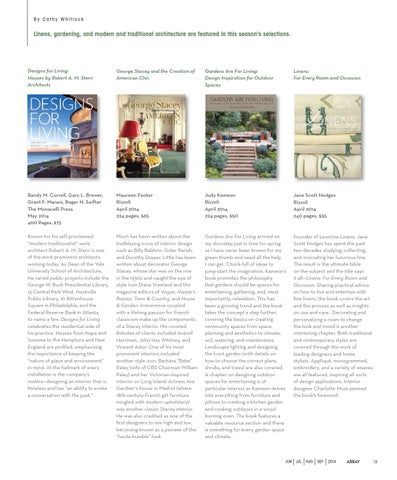 Linens, gardening, and modern and traditional architecture are featured in this season's selections.

Designs for Living: Houses by Robert A. M. Stern Architects

George Stacey and the Creation of American Chic

Gardens Are For Living: Design Inspiration for Outdoor Spaces

Linens: For Every Room and Occasion

Known for his self-proclaimed “modern traditionalist” work, architect Robert A. M. Stern is one of the most prominent architects working today. As Dean of the Yale University School of Architecture, his varied public projects include the George W. Bush Presidential Library, 15 Central Park West, Nashville Public Library, 10 Rittenhouse Square in Philadelphia, and the Federal Reserve Bank in Atlanta, to name a few. Designs for Living celebrates the residential side of his practice. Houses from Napa and Sonoma to the Hamptons and New England are profiled, emphasizing the importance of keeping the “nature of place and environment” in mind. At the hallmark of every installation is the company’s mantra—designing an interior that is timeless and has “an ability to evoke a conversation with the past.”

Much has been written about the trailblazing icons of interior design such as Billy Baldwin, Sister Parish, and Dorothy Draper. Little has been written about decorator George Stacey, whose star was on the rise in the 1930s and caught the eye of style icon Diana Vreeland and the magazine editors of Vogue, Harper’s Bazaar, Town & Country, and House & Garden. Irreverence coupled with a lifelong passion for French classicism make up the components of a Stacey interior. His coveted Rolodex of clients included Averell Harriman, John Hay Whitney, and Vincent Astor. One of his most prominent interiors included another style icon, Barbara “Babe” Paley (wife of CBS Chairman William Paley) and her Victorian-inspired interior on Long Island. Actress Ava Gardner’s house in Madrid (where 18th-century French gilt furniture mingled with modern upholstery) was another classic Stacey interior. He was also credited as one of the first designers to mix high and low, becoming known as a pioneer of the “haute-humble” look.

Gardens Are For Living arrived on my doorstep just in time for spring as I have never been known for my green thumb and need all the help I can get. Chock-full of ideas to jump-start the imagination, Kameon’s book promotes the philosophy that gardens should be spaces for entertaining, gathering, and, most importantly, relaxation. This has been a growing trend and the book takes the concept a step further, covering the basics on creating community spaces from space planning and aesthetics to climate, soil, watering, and maintenance. Landscape lighting and designing the front garden (with details on how to choose the correct plans, shrubs, and trees) are also covered. A chapter on designing outdoor spaces for entertaining is of particular interest as Kameon delves into everything from furniture and pillows to creating a kitchen garden and cooking outdoors in a woodburning oven. The book features a valuable resource section and there is something for every garden space and climate.

Founder of Leontine Linens, Jane Scott Hodges has spent the past two decades studying, collecting, and innovating her luxurious line. The result is the ultimate bible on the subject and the title says it all—Linens: For Every Room and Occasion. Sharing practical advice on how to live and entertain with fine linens, the book covers the art and the process as well as insights on use and care. Decorating and personalizing a room to change the look and mood is another interesting chapter. Both traditional and contemporary styles are covered through the work of leading designers and home stylists. Appliqué, monogrammed, embroidery, and a variety of weaves are all featured, inspiring all sorts of design applications. Interior designer Charlotte Moss penned the book’s foreword.