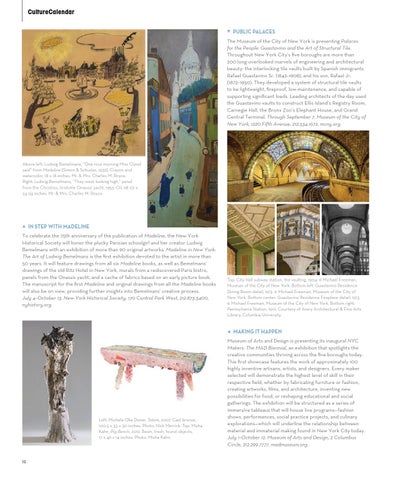 CultureCalendar Public Palaces The Museum of the City of New York is presenting Palaces for the People: Guastavino and the Art of Structural Tile. Throughout New York City’s five boroughs are more than 200 long-overlooked marvels of engineering and architectural beauty: the interlocking tile vaults built by Spanish immigrants Rafael Guastavino Sr. (1842–1908), and his son, Rafael Jr. (1872–1950). They developed a system of structural tile vaults to be lightweight, fireproof, low-maintenance, and capable of supporting significant loads. Leading architects of the day used the Guastavino vaults to construct Ellis Island’s Registry Room, Carnegie Hall, the Bronx Zoo’s Elephant House, and Grand Central Terminal. Through September 7. Museum of the City of New York, 1220 Fifth Avenue, 212.534.1672, mcny.org.

In Step With Madeline To celebrate the 75th anniversary of the publication of Madeline, the New-York Historical Society will honor the plucky Parisian schoolgirl and her creator Ludwig Bemelmans with an exhibition of more than 90 original artworks. Madeline in New York: The Art of Ludwig Bemelmans is the first exhibition devoted to the artist in more than 50 years. It will feature drawings from all six Madeline books, as well as Bemelmans’ drawings of the old Ritz Hotel in New York, murals from a rediscovered Paris bistro, panels from the Onassis yacht, and a cache of fabrics based on an early picture book. The manuscript for the first Madeline and original drawings from all the Madeline books will also be on view, providing further insights into Bemelmans’ creative process. July 4–October 13. New-York Historical Society, 170 Central Park West, 212.873.3400, nyhistory.org.

Museum of Arts and Design is presenting its inaugural NYC Makers: The MAD Biennial, an exhibition that spotlights the creative communities thriving across the five boroughs today. This first showcase features the work of approximately 100 highly inventive artisans, artists, and designers. Every maker selected will demonstrate the highest level of skill in their respective field, whether by fabricating furniture or fashion, creating artworks, films, and architecture, inventing new possibilities for food, or reshaping educational and social gatherings. The exhibition will be structured as a series of immersive tableaus that will house live programs—fashion shows, performances, social practice projects, and culinary explorations—which will underline the relationship between material and immaterial making found in New York City today. July 1–October 12. Museum of Arts and Design, 2 Columbus Circle, 212.299.7777, madmuseum.org.