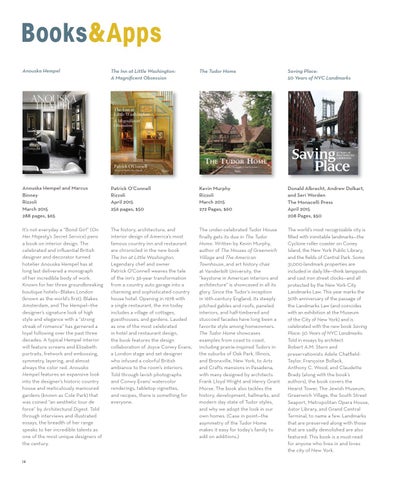 The Inn at Little Washington: A Magniﬁcent Obsession

It’s not everyday a “Bond Girl” (On Her Majesty’s Secret Service) pens a book on interior design. The celebrated and influential British designer and decorator turned hotelier Anouska Hempel has at long last delivered a monograph of her incredible body of work. Known for her three groundbreaking boutique hotels—Blakes London (known as the world’s first), Blakes Amsterdam, and The Hempel—the designer’s signature look of high style and elegance with a “strong streak of romance” has garnered a loyal following over the past three decades. A typical Hempel interior will feature screens and Elizabeth portraits, fretwork and embossing, symmetry, layering, and almost always the color red. Anouska Hempel features an expansive look into the designer’s historic country house and meticulously manicured gardens (known as Cole Park) that was coined “an aesthetic tour de force” by Architectural Digest. Told through interviews and illustrated essays, the breadth of her range speaks to her incredible talents as one of the most unique designers of the century.

The history, architecture, and interior design of America’s most famous country inn and restaurant are chronicled in the new book The Inn at Little Washington. Legendary chef and owner Patrick o’Connell weaves the tale of the inn’s 36-year transformation from a country auto garage into a charming and sophisticated country house hotel. opening in 1978 with a single restaurant, the inn today includes a village of cottages, guesthouses, and gardens. Lauded as one of the most celebrated in hotel and restaurant design, the book features the design collaboration of Joyce Conwy Evans, a London stage and set designer who infused a colorful British ambiance to the room’s interiors. Told through lavish photographs and Conwy Evans’ watercolor renderings, tabletop vignettes, and recipes, there is something for everyone.

The under-celebrated Tudor House finally gets its due in The Tudor Home. Written by Kevin Murphy, author of The Houses of Greenwich Village and The American Townhouse, and art history chair at Vanderbilt University, the “keystone in American interiors and architecture” is showcased in all its glory. Since the Tudor’s inception in 16th-century England, its steeply pitched gables and roofs, paneled interiors, and half-timbered and stuccoed facades have long been a favorite style among homeowners. The Tudor Home showcases examples from coast to coast, including prairie-inspired Tudors in the suburbs of oak Park, Illinois, and Bronxville, New York, to Arts and Crafts mansions in Pasadena, with many designed by architects Frank Lloyd Wright and Henry Grant Morse. The book also tackles the history, development, hallmarks, and modern day state of Tudor styles, and why we adopt the look in our own homes. (Case in point—the asymmetry of the Tudor Home makes it easy for today’s family to add on additions.)

The world’s most recognizable city is filled with inimitable landmarks—the Cyclone roller coaster on Coney Island, the New York Public Library, and the fields of Central Park. Some 31,000-landmark properties are included in daily life—think lampposts and cast iron street clocks—and all protected by the New York City Landmarks Law. This year marks the 50th anniversary of the passage of the Landmarks Law (and coincides with an exhibition at the Museum of the City of New York) and is celebrated with the new book Saving Place: 50 Years of NYC Landmarks. Told in essays by architect Robert A.M. Stern and preservationists Adele ChatfieldTaylor, Françoise Bollack, Anthony C. Wood, and Claudette Brady (along with the book’s authors), the book covers the Hearst Tower, The Jewish Museum, Greenwich Village, the South Street Seaport, Metropolitan opera House, Astor Library, and Grand Central Terminal, to name a few. Landmarks that are preserved along with those that are sadly demolished are also featured. This book is a must-read for anyone who lives in and loves the city of New York.