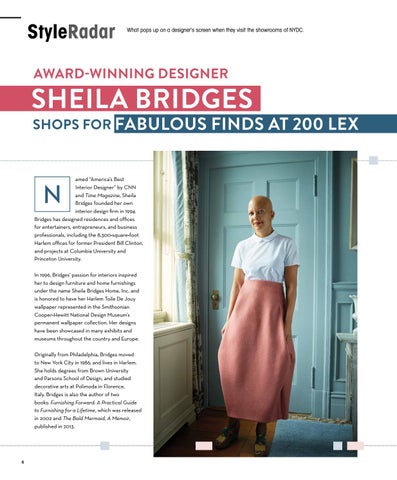 What pops up on a designer&#39;s screen when they visit the showrooms of NYDC.

amed “America’s Best Interior Designer” by CNN and Time Magazine, Sheila Bridges founded her own interior design firm in 1994. Bridges has designed residences and offices for entertainers, entrepreneurs, and business professionals, including the 8,300-square-foot Harlem offices for former President Bill Clinton, and projects at Columbia University and Princeton University. In 1996, Bridges’ passion for interiors inspired her to design furniture and home furnishings under the name Sheila Bridges Home, Inc. and is honored to have her Harlem Toile De Jouy wallpaper represented in the Smithsonian Cooper-Hewitt National Design Museum’s permanent wallpaper collection. Her designs have been showcased in many exhibits and museums throughout the country and Europe. Originally from Philadelphia, Bridges moved to New York City in 1986, and lives in Harlem. She holds degrees from Brown University and Parsons School of Design, and studied decorative arts at Polimoda in Florence, Italy. Bridges is also the author of two books: Furnishing Forward: A Practical Guide to Furnishing for a Lifetime, which was released in 2002 and The Bald Mermaid, A Memoir, published in 2013.

Array Magazine - Winter 2018 ARRAY Magazine brings the most interesting people, places and ideas in interior design into the homes and offices of both design professionals and consumers, featuring the best of the New York Design Center at 200 Lex.