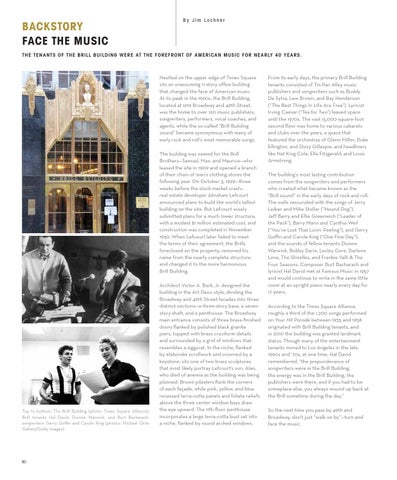 T he tenants of the B rill B uilding were at the forefront of A merican music for nearly 40 years .

Nestled on the upper edge of Times Square sits an unassuming 11-story office building that changed the face of American music. At its peak in the 1960s, the Brill Building, located at 1619 Broadway and 49th Street, was the home to over 160 music publishers, songwriters, performers, vocal coaches, and agents, while the so-called “Brill Building sound” became synonymous with many of early rock and roll’s most memorable songs. The building was named for the Brill Brothers—Samuel, Max, and Maurice—who leased the site in 1909 and opened a branch of their chain of men’s clothing stores the following year. On October 3, 1929—three weeks before the stock market crash— real estate developer Abraham Lefcourt announced plans to build the world’s tallest building on the site. But Lefcourt wisely submitted plans for a much lower structure, with a modest $1 million estimated cost, and construction was completed in November 1930. When Lefcourt later failed to meet the terms of their agreement, the Brills foreclosed on the property, removed his name from the nearly complete structure, and changed it to the more harmonious Brill Building.

Architect Victor A. Bark, Jr. designed the building in the Art Deco style, dividing the Broadway and 49th Street facades into three distinct sections—a three-story base, a sevenstory shaft, and a penthouse. The Broadway main entrance consists of three brass-finished doors flanked by polished black granite piers, topped with brass cruciform details and surrounded by a grid of windows that resembles a ziggurat. In the niche, flanked by elaborate scrollwork and crowned by a keystone, sits one of two brass sculptures that most likely portray Lefcourt’s son, Alan, who died of anemia as the building was being planned. Brown pilasters flank the corners of each façade, while pink, yellow, and blue recessed terra-cotta panels and foliate reliefs above the three center window bays draw the eye upward. The 11th-floor penthouse incorporates a large terra-cotta bust set into a niche, flanked by round arched windows.

From its early days, the primary Brill Building tenants consisted of Tin Pan Alley music publishers and songwriters such as Buddy De Sylva, Lew Brown, and Ray Henderson (“The Best Things In Life Are Free”). Lyricist Irving Caesar (“Tea for Two”) leased space until the 1970s. The vast 15,000-square-foot second floor was home to various cabarets and clubs over the years, a space that featured the orchestras of Glenn Miller, Duke Ellington, and Dizzy Gillespie, and headliners like Nat King Cole, Ella Fitzgerald, and Louis Armstrong. The building’s most lasting contribution comes from the songwriters and performers who created what became known as the “Brill sound” in the early days of rock and roll. The walls resounded with the songs of Jerry Leiber and Mike Stoller (“Hound Dog”), Jeff Barry and Ellie Greenwich (“Leader of the Pack”), Barry Mann and Cynthia Weil (“You’ve Lost That Lovin’ Feeling”), and Gerry Goffin and Carole King (“One Fine Day”), and the sounds of fellow tenants Dionne Warwick, Bobby Darin, Lesley Gore, Darlene Love, The Shirelles, and Frankie Valli &amp; The Four Seasons. Composer Burt Bacharach and lyricist Hal David met at Famous Music in 1957 and would continue to write in the same little room at an upright piano nearly every day for 17 years. According to the Times Square Alliance, roughly a third of the 1,200 songs performed on Your Hit Parade between 1935 and 1958 originated with Brill Building tenants, and in 2010 the building was granted landmark status. Though many of the entertainment tenants moved to Los Angeles in the late 1960s and ’70s, at one time, Hal David remembered, “the preponderance of songwriters were in the Brill Building, the energy was in the Brill Building, the publishers were there, and if you had to be someplace else, you always wound up back at the Brill sometime during the day.” So the next time you pass by 49th and Broadway, don’t just “walk on by”—turn and face the music.