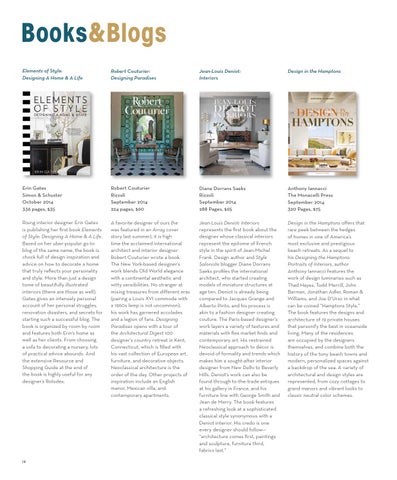 Books&amp;Blogs Elements of Style: Designing A Home &amp; A Life

Design in the Hamptons

Rising interior designer Erin Gates is publishing her first book Elements of Style: Designing A Home &amp; A Life. Based on her uber-popular go-to blog of the same name, the book is chock full of design inspiration and advice on how to decorate a home that truly reflects your personality and style. More than just a design tome of beautifully illustrated interiors (there are those as well), Gates gives an intensely personal account of her personal struggles, renovation disasters, and secrets for starting such a successful blog. The book is organized by room by room and features both Erin’s home as well as her clients. From choosing a sofa to decorating a nursery, lots of practical advice abounds. And the extensive Resource and Shopping Guide at the end of the book is highly useful for any designer’s Rolodex.

A favorite designer of ours (he was featured in an Array cover story last summer), it is high time the acclaimed international architect and interior designer Robert Couturier wrote a book. The New York-based designer’s work blends Old World elegance with a continental aesthetic and witty sensibilities. No stranger at mixing treasures from different eras (pairing a Louis XVI commode with a 1960s lamp is not uncommon), his work has garnered accolades and a legion of fans. Designing Paradises opens with a tour of the Architectural Digest 100 designer’s country retreat in Kent, Connecticut, which is filled with his vast collection of European art, furniture, and decorative objects. Neoclassical architecture is the order of the day. Other projects of inspiration include an English manor, Mexican villa, and contemporary apartments.

Jean-Louis Deniot: Interiors represents the first book about the designer whose classical interiors represent the epitome of French style in the spirit of Jean-Michel Frank. Design author and Style Saloniste blogger Diane Dorrans Saeks profiles the international architect, who started creating models of miniature structures at age ten. Deniot is already being compared to Jacques Grange and Alberto Pinto, and his process is akin to a fashion designer creating couture. The Paris-based designer’s work layers a variety of textures and materials with flea market finds and contemporary art. His restrained Neoclassical approach to décor is devoid of formality and trends which makes him a sought-after interior designer from New Delhi to Beverly Hills. Deniot’s work can also be found through to-the-trade antiques at his gallery in France, and his furniture line with George Smith and Jean de Merry. The book features a refreshing look at a sophisticated classical style synonymous with a Deniot interior. His credo is one every designer should follow— “architecture comes first, paintings and sculpture, furniture third, fabrics last.”

Design in the Hamptons offers that rare peek between the hedges of homes in one of America’s most exclusive and prestigious beach retreats. As a sequel to his Designing the Hamptons: Portraits of Interiors, author Anthony Iannacci features the work of design luminaries such as Thad Hayes, Todd Merrill, John Barman, Jonathan Adler, Roman &amp; Williams, and Joe D’Urso in what can be coined “Hamptons Style.” The book features the designs and architecture of 19 private houses that personify the best in oceanside living. Many of the residences are occupied by the designers themselves, and combine both the history of the tony beach towns and modern, personalized spaces against a backdrop of the sea. A variety of architectural and design styles are represented, from cozy cottages to grand manors and vibrant looks to classic neutral color schemes.