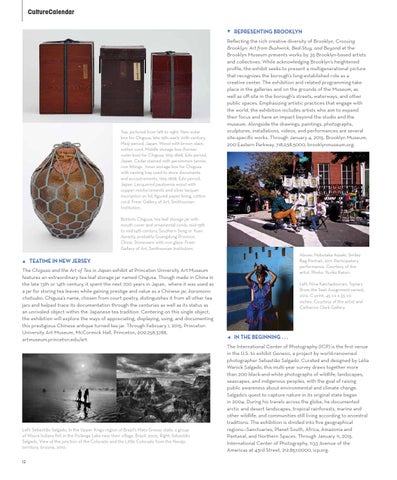 Reflecting the rich creative diversity of Brooklyn, Crossing Brooklyn: Art from Bushwick, Bed-Stuy, and Beyond at the Brooklyn Museum presents works by 35 Brooklyn-based artists and collectives. While acknowledging Brooklyn’s heightened profile, the exhibit seeks to present a multigenerational picture that recognizes the borough’s long-established role as a creative center. The exhibition and related programming take place in the galleries and on the grounds of the Museum, as well as off-site in the borough’s streets, waterways, and other public spaces. Emphasizing artistic practices that engage with the world, the exhibition includes artists who aim to expand their focus and have an impact beyond the studio and the museum. Alongside the drawings, paintings, photographs, sculptures, installations, videos, and performances are several site-specific works. Through January 4, 2015. Brooklyn Museum, 200 Eastern Parkway, 718.638.5000, brooklynmuseum.org.

Teatime in New Jersey The Chigusa and the Art of Tea in Japan exhibit at Princeton University Art Museum features an extraordinary tea-leaf storage jar named Chigusa. Though made in China in the late 13th or 14th century, it spent the next 700 years in Japan, where it was used as a jar for storing tea leaves while gaining prestige and value as a Chinese jar, karamono chatsubo. Chigusa’s name, chosen from court poetry, distinguishes it from all other tea jars and helped trace its documentation through the centuries as well as its status as an unrivaled object within the Japanese tea tradition. Centering on this single object, the exhibition will explore the ways of appreciating, displaying, using, and documenting this prestigious Chinese antique turned tea jar. Through February 1, 2015. Princeton University Art Museum, McCormick Hall, Princeton, 609.258.3788, artmuseum.princeton.edu/art.

IN THE BEGINNING . . . The International Center of Photography (ICP) is the first venue in the U.S. to exhibit Genesis, a project by world-renowned photographer Sebastião Salgado. Curated and designed by Lélia Wanick Salgado, this multi-year survey draws together more than 200 black-and-white photographs of wildlife, landscapes, seascapes, and indigenous peoples, with the goal of raising public awareness about environmental and climate change. Salgado’s quest to capture nature in its original state began in 2004. During his travels across the globe, he documented arctic and desert landscapes, tropical rainforests, marine and other wildlife, and communities still living according to ancestral traditions. The exhibition is divided into five geographical regions—Sanctuaries, Planet South, Africa, Amazonia and Pantanal, and Northern Spaces. Through January 11, 2015. International Center of Photography, 1133 Avenue of the Americas at 43rd Street, 212.857.0000, icp.org.