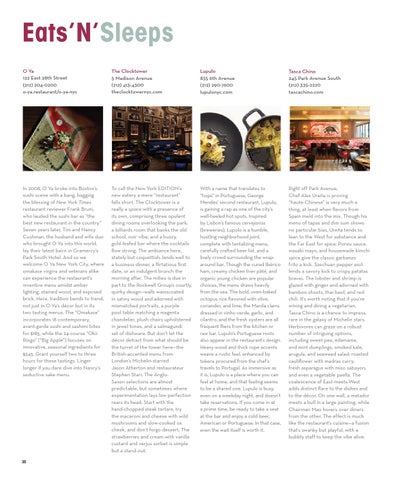 In 2008, O Ya broke into Boston’s sushi scene with a bang, bagging the blessing of New York Times restaurant reviewer Frank Bruni, who lauded the sushi bar as “the best new restaurant in the country.” Seven years later, Tim and Nancy Cushman, the husband and wife duo who brought O Ya into this world, lay their latest bairn in Gramercy’s Park South Hotel. And so we welcome O Ya New York City, where omakase virgins and veterans alike can experience the restaurant’s inventive menu amidst amber lighting, stained wood, and exposed brick. Here, tradition bends to trend, not just in O Ya’s décor but in its two tasting menus. The “Omakase” incorporates 18 contemporary, avant-garde sushi and sashimi bites for $185, while the 24-course “Okii Ringo” (“Big Apple”) focuses on innovative, seasonal ingredients for $245. Grant yourself two to three hours for these tastings. Linger longer if you dare dive into Nancy’s seductive sake menu.

To call the New York EDITION’s new eatery a mere “restaurant” falls short. The Clocktower is a really a space with a presence of its own, comprising three opulent dining rooms overlooking the park; a billiards room that banks the old school, noir vibe; and a buzzy, gold-leafed bar where the cocktails flow strong. The ambiance here, stately but coquettish, lends well to a business dinner, a flirtatious first date, or an indulgent brunch the morning after. The milieu is due in part to the Rockwell Group’s courtly, quirky design—walls wainscoated in satiny wood and adorned with mismatched portraits, a purple pool table matching a magenta chandelier, plush chairs upholstered in jewel tones, and a salmagundi set of dishware. But don’t let the décor detract from what should be the turret of the tower here—the British-accented menu from London’s Michelin-starred Jason Atherton and restaurateur Stephen Starr. The AngloSaxon selections are almost predictable, but sometimes where experimentation lays low perfection rears its head. Start with the hand-chopped steak tartare, try the macaroni and cheese with wild mushrooms and slow-cooked ox cheek, and don’t forgo dessert. The strawberries and cream with vanilla custard and verjus sorbet is simple but a stand-out.

With a name that translates to “hops” in Portuguese, George Mendes’ second restaurant, Lupulo, is gaining a rap as one of the city’s well-heeled hot spots. Inspired by Lisbon’s famous cervejarias (breweries), Lupolo is a humble, hustling neighborhood joint, complete with tantalizing menu, carefully crafted beer list, and a lively crowd surrounding the wraparound bar. Though the cured Ibérico ham, creamy chicken liver pâté, and organic young chicken are popular choices, the menu draws heavily from the sea. The bold, oven-baked octopus rice flavored with olive, coriander, and lime; the Manila clams dressed in vinho verde, garlic, and cilantro; and the fresh oysters are all frequent fliers from the kitchen or raw bar. Lupulo’s Portuguese roots also appear in the restaurant’s design. Heavy wood and thick rope accents weave a rustic feel, enhanced by tokens procured from the chef’s travels to Portugal. As immersive as it is, Lupulo is a place where you can feel at home, and that feeling seems to be a shared one. Lupulo is busy, even on a weekday night, and doesn’t take reservations. If you come in at a prime time, be ready to take a seat at the bar and enjoy a cold beer, American or Portuguese. In that case, even the wait itself is worth it.

Right off Park Avenue, Chef Alex Ureña is proving “haute-Chinese” is very much a thing, at least when flavors from Spain meld into the mix. Though his menu of tapas and dim sum shows no particular bias, Ureña tends to lean to the West for substance and the Far East for spice. Ponzu sauce, wasabi mayo, and housemade kimchi spice give the classic garbanzo frito a kick. Szechuan pepper aioli lends a savory kick to crispy patatas bravas. The lobster and shrimp is glazed with ginger and adorned with bamboo shoots, thai basil, and red chili. It’s worth noting that if you’re wining and dining a vegetarian, Tasca Chino is a chance to impress, rare in the galaxy of Michelin stars. Herbivores can graze on a robust number of intriguing options, including sweet pea, edamame, and mint dumplings; smoked kale, arugula, and seaweed salad; roasted cauliflower with madras curry; fresh asparagus with miso sabayon; and even a vegetable paella. The coalescence of East-meets-West adds distinct flare to the dishes and to the décor. On one wall, a matador meets a bull in a large painting, while Chairman Mao hovers over diners from the other. The effect is much like the restaurant’s cuisine—a fusion that’s swanky but playful, with a bubbly staff to keep the vibe alive.

Array Magazine - Fall 2015 ARRAY Magazine brings the most interesting people, places and ideas in interior design into the homes and offices...

Array Magazine - Fall 2015 ARRAY Magazine brings the most interesting people, places and ideas in interior design into the homes and offices...