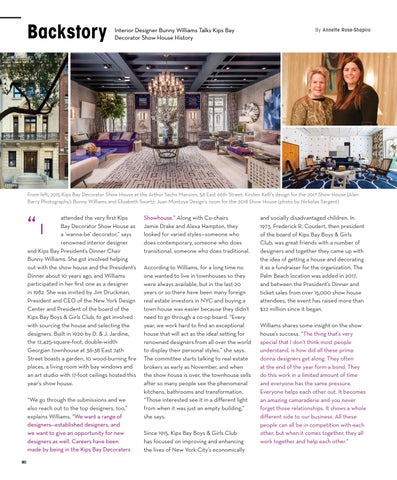 attended the very first Kips Bay Decorator Show House as a ‘wanna-be’ decorator,” says renowned interior designer and Kips Bay President’s Dinner Chair Bunny Williams. She got involved helping out with the show house and the President’s Dinner about 10 years ago, and Williams participated in her first one as a designer in 1982. She was invited by Jim Druckman, President and CEO of the New York Design Center and President of the board of the Kips Bay Boys & Girls Club, to get involved with sourcing the house and selecting the designers. Built in 1920 by D. & J. Jardine, the 12,425-square-foot, double-width Georgian townhouse at 36-38 East 74th Street boasts a garden, 10 wood-burning fire places, a living room with bay windows and an art studio with 17-foot ceilings hosted this year’s show house. “We go through the submissions and we also reach out to the top designers, too,” explains Williams. “We want a range of designers—established designers, and we want to give an opportunity for new designers as well. Careers have been made by being in the Kips Bay Decoraters 80

Showhouse.” Along with Co-chairs Jamie Drake and Alexa Hampton, they looked for varied styles—someone who does contemporary, someone who does transitional, someone who does traditional. According to Williams, for a long time no one wanted to live in townhouses so they were always available, but in the last 20 years or so there have been many foreign real estate investors in NYC and buying a town house was easier because they didn’t need to go through a co-op board. “Every year, we work hard to find an exceptional house that will act as the ideal setting for renowned designers from all over the world to display their personal styles,” she says. The committee starts talking to real estate brokers as early as November, and when the show house is over, the townhouse sells after so many people see the phenomenal kitchens, bathrooms and transformation. “Those interested see it in a different light from when it was just an empty building,” she says. Since 1915, Kips Bay Boys & Girls Club has focused on improving and enhancing the lives of New York City’s economically

and socially disadvantaged children. In 1973, Frederick R. Coudert, then president of the board of Kips Bay Boys & Girls Club, was great friends with a number of designers and together they came up with the idea of getting a house and decorating it as a fundraiser for the organization. The Palm Beach location was added in 2017, and between the President’s Dinner and ticket sales from over 15,000 show house attendees, the event has raised more than $22 million since it began. Williams shares some insight on the show house’s success. “The thing that’s very special that I don’t think most people understand, is how did all these prima donna designers get along. They often at the end of the year form a bond. They do this work in a limited amount of time and everyone has the same pressure. Everyone helps each other out. It becomes an amazing camaraderie and you never forget those relationships. It shows a whole different side to our business. All these people can all be in competition with each other, but when it comes together, they all work together and help each other.”

Array Magazine - Summer 2019 ARRAY Magazine brings the most interesting people, places and ideas in interior design into the homes and offic...

Array Magazine - Summer 2019 ARRAY Magazine brings the most interesting people, places and ideas in interior design into the homes and offic...