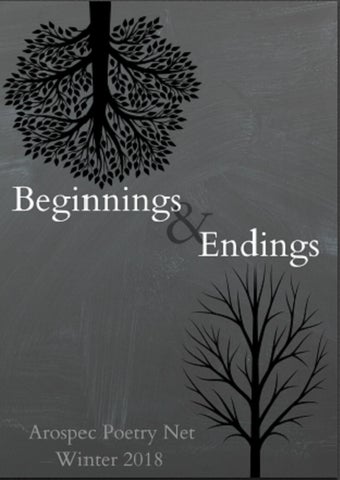 Words from the Editor “Life and death are always so mixed up, in the same way some beginnings are endings.” This quote from TV series Sense8 raises many questions for me. How many beginnings does one go through in life? How many endings? How many little deaths and little births does one experience? How many eras? How many projects? How many relationship start, end, begin anew only to fade away? And do we even begin at birth? Before that? Do we end at death? Later? Do we ever really end? Are “beginnings” and “endings” really just markers we apply to events in order to make our lives feel more structured? Or is there a specific quality in their essence that makes them tangible and meaningful? I don’t have answers to any of those questions. Or maybe I do, but they are very personal answers, more beliefs than anything else and based more on experiences than rationality. Because, whichever way we define them, beginnings and endings are concepts loaded with emotions. The end of a cycle as well as the beginning of the next one are both causes of fear as well as relief. As such, it’s easy to want it all to stop. Not really to put an end to things, but simply to pause life for a while. To be without fear. But that would mean living without change. It would mean living without the essence of who we truly are: constantly evolving beings. I am personally very fond of the readings in tarot that interpret the Death card as something positive, emphasizing the renewal that comes from the end of a cycle. In this card, beginnings and endings are inherently linked, and invite you to leave behind the things that hold you down so you can grown into a better version of yourself. I believe that beginnings and endings of all kinds represent points of imbalance in our lives, moments that open up possibilities. Every person will find a different way to interpret those possibilities, in the same way everyone will have a slightly different way of interpreting the Death card in tarot. All the poems you’re about to read represent one such interpretation of what a particular turning point can mean. May you find them inspiring enough to re-examine all the pivotal moments in your life, whether they be past or to come. Remember that, whatever happens, we are growing.

drip drop drip drop You dream of water. Everything is fluid, flowing, there and gone again.

You are water, as well as apart from it. You grow other and big.

Drink. Consume. Try to make it Sacrifice not Slaughter.

You drown. Life is a cycle with an end. It is unfair, but you belong to the

One Night Only. A stranger lurks in my bedroom Drunk, a fresh faced university starter Halfway to their halls. We are but a pit stop to the southerner isle So a put up on a floor will be a bed for the night. The only problem is I had forgotten. I canâ&#x20AC;&#x2122;t sleep With others in the room. I lie Similarly drunk and wallowing Listening to them breathe For eight hours straight. Feeling back at University myself For all insomnia coloured my nights And I would lie Drunk and petrified Of the future. Building a house in the halflight of my consciousness Filling it with solar powered fairy lights A library And a walled garden. Plumbing, storage, structural integrity, Detailed and still not done To the day. The journey-starter snuffles And turns over at 4am Content to sleep Until tomorrow when the Partying begins. I lie Sober and exhausted With work in the morning Hoping hopes of no trend-setting Where my brain takes the sleeplessness And runs with it.

Every First Time an End of the World -Mari

i’m thinking of that time my dad slapped me for some minor mistake i think it was 2012 (he didn’t use to hit me, mom did) and then i went and cut myself i needed to hurt someone but it couldn’t be him he has privilege he is bigger than i am later that night he took off my bedroom door and i had a meltdown again (was it all the same episode?) i couldn’t enter that open-mouthed room thought it looked like a cave but at night one needs to sleep somewhere then, days later my brother saw the cuts, he said ‘what’s that you have on your wrists?’ mind your own fucking business and then my mother worried she asked but i did not tell her the truth today i was on the train having another meltdown it’s been a tough couple of weeks and the violence would not leave me i did something i think i’d seen online i took a pen and drew all over my hands on my knuckles where i needed to feel pain cause the other thing i had in my bag was a scissor and one does not want to attract attention my therapist says i’m doing really well she compares me to other patients (is that ok for a therapist to do?) but not hurting yourself is not an achievement if everything else still remains the same.

A day came into existence, The limelight of my ejection, When I couldnâ&#x20AC;&#x2122;t control my resistance, And I couldnâ&#x20AC;&#x2122;t handle rejection. Guns pointed and cocked to fire, The last straw of my life, Mucking through mud and mire, To endure the lie. That one fateful afternoon, When I had to decide which side to take, All my mind was out of tune, And my heart heavy with its ache. And, although, my soul was bound to shatter, The first day, I had no choice in that matter.

The Question: A rework of Shakespeare’s Sonnet -Meeni

Who’s there? Who dares brave Self-imposed loneliness, Rumination on a theme It befits not strangers to know? I have reasons To refuse humankind, Selfish and selfless, And ask again: Who’s there, Friend or foe? If perchance You be neither I would test your ears With a tale: It begins on four legs, Witnesses the death of a world. Its arms barely thick enough To lift a book it asks: How much more painful does it get? So if you be no friend And your ears sound, My voice not shaky, Go bid the soldiers shoot.

On The Horizon -KD

Last page And so it comes to this. The last page. I don’t doubt you’ll miss the made up people left inside after all, you made it to the end. NoI do wonder, though, about someone who is so often forgotten, yet was there for every line. You’ll miss the storya compliment to my words, that much I see, but I have to askwill you miss me?

Meeni Levi: Editor, “The Water”, “The Question” Meeni is a Belgian poet, the founder of the Arospec Poetry Network and an avid cacti collector. Read more of zir poetry at http://astrangershandwriting.tumblr.com Emma Friend:

Emma Friend is a young poet from an old town, looking anywhere she can for inspiration Charlotte Mortimer-Talman:

Charlotte likes to think Keats was right when he said poetry should come naturally or not at all. She writes conversational pieces in which she likes to imagine the audience is standing right beside her, making faces. Read more of her poetry at http://vosesnequam.tumblr.com Nuri:

Nuri is a British teen who needs no soulmate other than their laptop. Read more of their poetry at http://poemsfromthewindow.tumblr.com Mari Lezcano:

“Every First Time an End of the World”

Mari is an agender aroace who started writing poems out of their own need for romance-free poetry. Read more of their poetry at http://phormaldehyde.tumblr.com/tagged/my-poetry Ana Jovanovska:

Ana is a Macedonian contemporary artist with a Master’s Degree in Art, active on the art scene in the country and abroad. Find more of her art at www.facebook.com/artofanajovanovska/ KD Photography:

KD grew up doing a variety of art, from painting to wire work, music to sewing; she now does photography to capture her love for sunsets. Find more of her work at https://sunsetphotographyoverthecity.tumblr.com

If you enjoyed this zine and would like to read more romance-free poetry by arosepec writers, donâ&#x20AC;&#x2122;t hesitate to join us at A collection of art and poetry by contemporary arospec artists. ISSUE #3: BEGINNINGS & ENDINGS

A collection of art and poetry by contemporary arospec artists. ISSUE #3: BEGINNINGS & ENDINGS