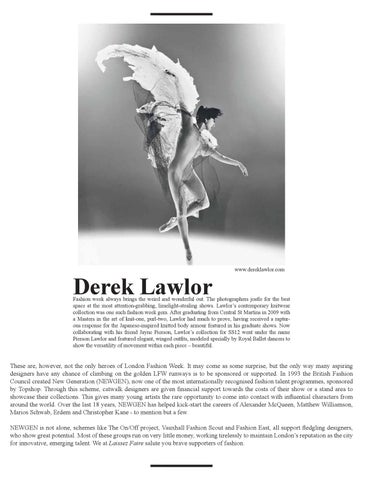 Fashion week always brings the weird and wonderful out. The photographers jostle for the best space at the most attention-grabbing, limelight-stealing shows. Lawlor’s contemporary knitwear collection was one such fashion week gem. After graduating from Central St Martins in 2009 with a Masters in the art of knit-one, purl-two, Lawlor had much to prove, having received a rapturous response for the Japanese-inspired knitted body armour featured in his graduate shows. Now collaborating with his friend Jayne Pierson, Lawlor’s collection for SS12 went under the name Pierson Lawlor and featured elegant, winged outfits, modeled specially by Royal Ballet dancers to show the versatility of movement within each piece – beautiful.

These are, however, not the only heroes of London Fashion Week. It may come as some surprise, but the only way many aspiring designers have any chance of climbing on the golden LFW runways is to be sponsored or supported. In 1993 the British Fashion Council created New Generation (NEWGEN), now one of the most internationally recognised fashion talent programmes, sponsored by Topshop. Through this scheme, catwalk designers are given financial support towards the costs of their show or a stand area to showcase their collections. This gives many young artists the rare opportunity to come into contact with influential characters from around the world. Over the last 18 years, NEWGEN has helped kick-start the careers of Alexander McQueen, Matthew Williamson, Marios Schwab, Erdem and Christopher Kane - to mention but a few. NEWGEN is not alone, schemes like The On/Off project, Vauxhall Fashion Scout and Fashion East, all support fledgling designers, who show great potential. Most of these groups run on very little money, working tirelessly to maintain London’s reputation as the city for innovative, emerging talent. We at Laissez Faire salute you brave supporters of fashion. 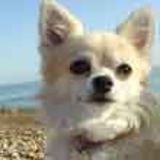