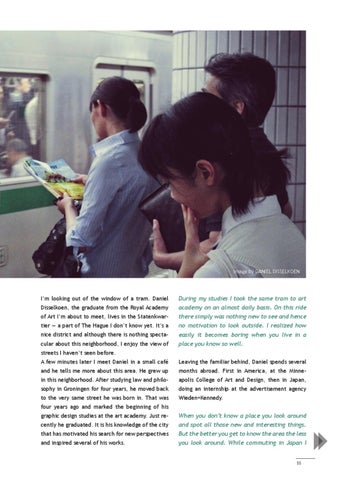 I’m looking out of the window of a tram. Daniel Disselkoen, the graduate from the royal academy of art I’m about to meet, lives in the Statenkwartier ― a part of The Hague I don’t know yet. It’s a nice district and although there is nothing spectacular about this neighborhood, I enjoy the view of

During my studies I took the same tram to art academy on an almost daily basis. on this ride there simply was nothing new to see and hence no motivation to look outside. I realized how easily it becomes boring when you live in a place you know so well.

streets I haven’t seen before. a few minutes later I meet Daniel in a small café

and he tells me more about this area. He grew up

months abroad. First in america, at the Minne-

in this neighborhood. after studying law and philo-

apolis College of art and Design, then in Japan,

sophy in Groningen for four years, he moved back

doing an internship at the advertisement agency

to the very same street he was born in. That was

four years ago and marked the beginning of his graphic design studies at the art academy. Just recently he graduated. It is his knowledge of the city that has motivated his search for new perspectives and inspired several of his works.

When you don’t know a place you look around and spot all those new and interesting things. But the better you get to know the area the less you look around. While commuting in Japan I 55 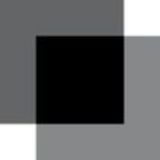