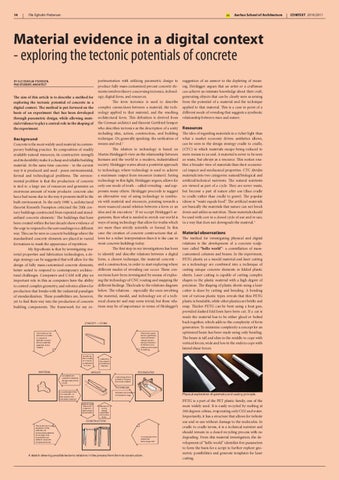 Material evidence in a digital context

The aim of this article is to describe a method for exploring the tectonic potential of concrete in a digital context. The method is put forward on the basis of an experiment that has been developed through parametric design, while allowing material evidence to play a central role in the shaping of the experiment.

Background Concrete is the most widely used material in contemporary building practice. Its composition of readily available natural resources, its constructive strength and its durability make it a cheap and reliable building material. At the same time concrete – in the current way it is produced and used - poses environmental, formal and technological problems. The environmental problem is that the production of concrete is tied to a large use of resources and generates an enormous amount of waste products: concrete also has a bad name due to the way it presents itself in the built environment. In the early 1980´s, architectural theorist Kenneth Frampton criticised the 20th century buildings constructed from repeated and standardised concrete elements.1 The buildings that have been created within the last decade show evidence of the urge to respond to the surroundings in a different way. This can be seen in concrete buildings where the standardised concrete elements are placed in varied formations to mask the appearance of repetition. My hypothesis is that by investigating material properties and fabrication technologies, a design strategy can be suggested that will allow for the design of fully mass-customised concrete elements, better suited to respond to contemporary architectural challenges. Computers and CAM will play an important role in this as computers have the ability to control complex geometry, and robotics allows for production that breaks with the industrial paradigm of standardization. These possibilities are, however, yet to find their way into the production of concrete building components. The framework for my ex-

perimentation with utilizing parametric design to produce fully mass-customised precast concrete elements involves theory concerning tectonics, technology, digital form, and resources. The term tectonics is used to describe complex connections between a material, the technology applied to that material, and the resulting architectural form. This definition is derived from the German architect and theorist Gottfried Semper who describes tectonics as the description of a unity including idea, action, construction, and building technique. Or, generally speaking: the unification of means and end.2 The relation to technology is based on Martin Heidegger’s view on the relationship between humans and the world in a modern, industrialised society. Heidegger warns about a positivist approach to technology, where technology is used to achieve a maximum output from resources (nature). Seeing technology in this light, Heidegger argues, allows for only one mode of truth – called revealing - and suppresses many others. Heidegger proceeds to suggest an alternative way of using technology in symbiosis with material and resources, pointing towards a more nuanced causal relation between a form or an idea and its execution.3 If we accept Heidegger’s arguments, then what is needed to enrich our world is ways of using technology that allow for truths which are more than strictly scientific or formal. In this case: the creation of concrete constructions that allows for a richer interpretation than it is the case in most concrete buildings today. The first step in my investigations has been to identify and describe relations between a digital form, a chosen technique, the material concrete – and a construction, in order to start exploring where different modes of revealing can occur. These connections have been investigated by means of exploring the technology of CNC routing and mapping the different findings. This leads to the relations diagram below. The relations – especially the ones involving the material, mould, and technology are of a technical character and may seem trivial, but these relations may be of importance in terms of Heidegger’s

A form that is given tectonic qualities by means of the technology. E.g neccitating an alteration to the form, or by adding an extra layer of meaning

tranferring the concept to a mould -as elements or in-situ

suggestion of an answer to the depleting of meaning. Heidegger argues that an artist or a craftsman can achieve an intimate knowledge about their craft, generating objects that can be clearly seen as arising from the potential of a material and the technique applied to that material. This is a case in point of a different mode of revealing that suggests a symbiotic relationship between man and nature.

Resources The idea of regarding materials in a richer light than what a market economy driven aesthetics allows, can be seen in the design strategy cradle to cradle, (CTC) in which materials escape being reduced to mere means to an end. A material is never to be seen as waste, but always as a resource. This notion enables a broader view of materials than their economical impact and mechanical properties. CTC divides materials into two categories: natural/biological and artificial/technical nutrients. The natural nutrients are viewed as part of a cycle. They are never waste, but become a part of nature after use (thus cradle to cradle rather than cradle to grave). The popular idiom is “waste equals food”. The artificial materials are basically the materials that nature can not break down and utilize as nutrition. These materials should be used with care in a closed cycle of use and re-use, in a way that does not downgrade the material.4

Material observations The method for investigating physical and digital relations is the development of a concrete sculpture called “hello world”- a constellation of masscustomised columns and beams. In the experiment, PETG plastic as a mould material and laser cutting as a technology are combined into a technique of casting unique concrete elements in folded plastic sheets. Laser cutting is capable of cutting complex shapes in the plastic material with a high degree of precision. The shaping of plastic sheets using a laser cutter is done by cutting and bending. A bending test of various plastic types reveals that thin PETG plastic is bendable, while other plastics are brittle and snap. Thicker PETG can be bent using a heat gun, provided dashed fold lines have been cut. If a cut is made the material has to be either glued or bolted back together, which adds to the complexity of form generation. To minimize complexity a concept for an optimised beam has been made using only bending. The beam is tall and slim in the middle to cope with vertical forces, wide and low in the ends to cope with lateral shear forces.

TECHNOLOGY a technology that is suitable in shaping the mould material

the best mould material for that technology

ability to read the mould material in the finished construction

CONSTRUCTION The construction as an expression of the aesthetic and constructive potentials of concrete, i.e its shapeability and ability to cope with compressive forces

A construction that reveals the technology used

A sketch showing possible tectonic relations in the process from form to construction.

PETG is a part of the PET plastic family, one of the most widely used. It is easily recycled by melting at 260 degrees celsius, evaporating only CO2 and water. Importantly, it has a structure that allows for infinite use and re-use without damage to the molecules. In cradle to cradle terms, it is a technical nutrient and should remain in a closed recycling process with no degrading. From this material investigation, the development of “hello world” identifies five parameters to form the basis for a script to further explore geometric possibilities and generate templates for laser cutting. 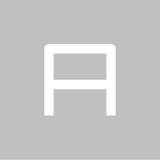