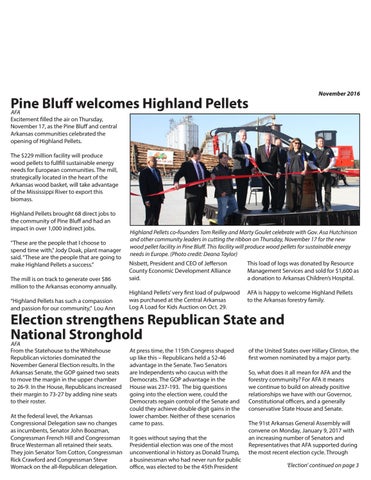 The $229 million facility will produce wood pellets to fullfill sustainable energy needs for European communities. The mill, strategically located in the heart of the Arkansas wood basket, will take advantage of the Mississippi River to export this biomass. Highland Pellets brought 68 direct jobs to the community of Pine Bluff and had an impact in over 1,000 indirect jobs. “These are the people that I choose to spend time with,” Jody Doak, plant manager said. “These are the people that are going to make Highland Pellets a success.” The mill is on track to generate over $86 million to the Arkansas economy annually. “Highland Pellets has such a compassion and passion for our community,” Lou Ann

This load of logs was donated by Resource Management Services and sold for $1,600 as a donation to Arkansas Children’s Hospital.

Highland Pellets’ very first load of pulpwood was purchased at the Central Arkansas Log A Load for Kids Auction on Oct. 29.

AFA is happy to welcome Highland Pellets to the Arkansas forestry family.

At press time, the 115th Congress shaped up like this – Republicans held a 52-46 advantage in the Senate. Two Senators are Independents who caucus with the Democrats. The GOP advantage in the House was 237-193. The big questions going into the election were, could the Democrats regain control of the Senate and could they achieve double digit gains in the lower chamber. Neither of these scenarios came to pass.

of the United States over Hillary Clinton, the first women nominated by a major party.

Election strengthens Republican State and National Stronghold AFA From the Statehouse to the Whitehouse Republican victories dominated the November General Election results. In the Arkansas Senate, the GOP gained two seats to move the margin in the upper chamber to 26-9. In the House, Republicans increased their margin to 73-27 by adding nine seats to their roster.

It goes without saying that the Presidential election was one of the most unconventional in history as Donald Trump, a businessman who had never run for public office, was elected to be the 45th President

So, what does it all mean for AFA and the forestry community? For AFA it means we continue to build on already positive relationships we have with our Governor, Constitutional officers, and a generally conservative State House and Senate. The 91st Arkansas General Assembly will convene on Monday, January 9, 2017 with an increasing number of Senators and Representatives that AFA supported during the most recent election cycle. Through ‘Election’ continued on page 3

Changing public perception one burn at a time AFA While the overwhelming majority of our industry understands the importance of prescribed burning, it’s crucial that we educate those outside of our circles on the benefits of this vital forest management practice. In a 2010 study from Louisiana State University, 48% of respondents were interested in learning more about prescribed burning. As members of the forestry industry, this shows to be an opportunity for our industry to better communicate the benefits of prescribed burning with the general public. How can we accomplish this? According to the U.S. Forest Service, there are many benefits of prescribed burns that the general public should be aware of including the following: reduce hazardous fuels, such as excessive pine straw, underbrush, etc., protecting our communities from extreme wildfires; the spread of pests and diseases are reduced; forage for game is provided through this process; improves habitat for threatened

and endangered species; returns nutrients back to the soil; and promotes the growth of trees, wildflowers and other plants. “Prescribed burning is a very important tool in forest management and the silvicultural process. It should be used more often,” Trayvis Todd, Prescribe Burn Manager of Forestry Associates, said. Overcrowded forests cause Trayvis Todd, Forestry Associates, completes a prescribed burn for a client in Grant County on November 4. The Arkansas trees to become stressed, creating excessive fuels that Forestry Commission monitors all prescribed burns in the state. become susceptible to fires and make fire-dependent species disappear. Commission, the Nature Conservancy, the Arkansas Game and Fish Commission and “The most important thing the public needs others to host the annual Prescribed Fire School held at Camp Robinson in Little Rock to realize is that the prescribed burning each year. For more information about the process is vital to keeping our forests Prescribed Fire School, check out www. healthy,” AFA member Doug Hollinger said. arkfirenetwork.org. AFA partners with the Arkansas Forestry

An inside look at AFA member online resources Are you interested in using the AFA website to its fullest potential? We have a membership directory, buyer’s guide and economic impact resources all for your use!

To access the MEMBERSHIP DIRECTORY: Step 1: Login to www.arkforests.org. Username: This is the email address that AFA has on file for you. Password: Call the office if you need to reset your password. (501)374-2441

Step 2: Scroll to bottom of page and click on the AFA BUYER’S GUIDE icon.

Step 3: You will be taken to the Buyer’s Guide where you can search for any forestry related services you need. Interested in advertising on our Buyer’s Guide? EMAIL | afa-advertise@svmmedia.com

Step 3: Click SEARCH OPENINGS then SEARCH Step 4: Click the job that interests you. If you have a job that you would like to post to AFA members, email Rebecca with details of the position. Her email is rneely@ arkforests.org

Step 2: Go to the ABOUT AFA tab. Step 3: Select MEMBER DIRECTORY on the dropdown menu. You may enter search criteria at this point for individualized results OR leave it blank to view everyone. Step 4: Click on CONTINUE to be taken to your search results.

Follow AFA on social media for the latest updates!

How does the forestry industry impact Arkansas’ economy? AFA When you think of Arkansas and our competition with other states, it’s no surprise to see that we rank number one among all 13 southern states when it comes to forestry and the economy. Did you know that the standing timber in Arkansas’ forests have a value of more than $12.6 billion? This number does not include outdoor recreation and tourism. Arkansas’ forests cover approximately 19 million acres, or 58 percent of the state. Over 15 million of Arkansas’ forests are privately owned. Arkansas timberlands increased 1.7 million acres from 1978 to 2015, according to the Arkansas Forestry Commission.

AFA members play a strategic role in making Arkansas number one in the US South when it comes to forestry. The

Most recently, Domtar invested $160 million to convert a paper machine in their Ashdown plant to a fluff-pulp paper

‘Election’ continued the AFA Forest Express PAC, the association participated in 21 state races. In 20 of those races, the AFA supported candidate was elected or re-elected to serve. We also have great relationships with our Congressional delegation and their staffs and look forward to continuing to work on issues of importance to forestry. AFA also works with a number of national partners like the National Alliance of Forest

Owners (NAFO), American Forest and Paper Association (AF&PA), Forest Resources Association (FRA), Forest Landowners Association (FLA) and more, who work daily to position the timber and forest products community for success in the federal public policy arena. Going forward AFA and our partners will strive to work with these various administrations and eagerly await opportunities to weigh in on priority issues.

According to NAFO CEO Dave Tenny, who recently spoke at the AFA Annual Meeting in Fayetteville, the Trump administration will likely seek to change or repeal a number of existing and pending regulations including EPA’s Waters of the US and Clean Power Plan regulations and Department of the Interior Endangered Species Act regulations. The Administration and Congress are also well positioned to make an earnest attempt at tax reform. That’s good news for forestry. 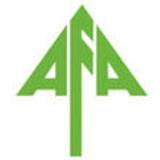