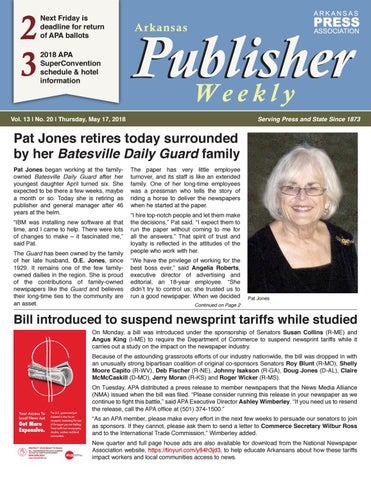 Pat Jones retires today surrounded by her Batesville Daily Guard family Pat Jones began working at the familyowned Batesville Daily Guard after her youngest daughter April turned six. She expected to be there a few weeks, maybe a month or so. Today she is retiring as publisher and general manager after 46 years at the helm. “IBM was installing new software at that time, and I came to help. There were lots of changes to make – it fascinated me,” said Pat. The Guard has been owned by the family of her late husband, O.E. Jones, since 1929. It remains one of the few familyowned dailies in the region. She is proud of the contributions of family-owned newspapers like the Guard and believes their long-time ties to the community are an asset.

The paper has very little employee turnover, and its staff is like an extended family. One of her long-time employees was a pressman who tells the story of riding a horse to deliver the newspapers when he started at the paper. “I hire top-notch people and let them make the decisions,” Pat said. “I expect them to run the paper without coming to me for all the answers.” That spirit of trust and loyalty is reflected in the attitudes of the people who work with her. “We have the privilege of working for the best boss ever,” said Angelia Roberts, executive director of advertising and editorial, an 18-year employee. “She didn’t try to control us; she trusted us to run a good newspaper. When we decided Continued on Page 2

The U.S. government just imposed a new tax on newsprint, increasing the cost of the paper you are holding. These tariffs hurt newspapers, readers, workers and local communities.

Protect your right to read.

Tell your representatives in Congress to stop the tariffs on newsprint.

On Tuesday, APA distributed a press release to member newspapers that the News Media Alliance (NMA) issued when the bill was filed. “Please consider running this release in your newspaper as we continue to fight this battle,” said APA Executive Director Ashley Wimberley. “If you need us to resend the release, call the APA office at (501) 374-1500.” “As an APA member, please make every effort in the next few weeks to persuade our senators to join as sponsors. If they cannot, please ask them to send a letter to Commerce Secretary Wilbur Ross and to the International Trade Commission,” Wimberley added. New quarter and full page house ads are also available for download from the National Newspaper Association website, https://tinyurl.com/y84h3jd3, to help educate Arkansans about how these tariffs impact workers and local communities access to news.

The 2018 APA SuperConvention will be held June 27-30 at the Inn of the Ozarks in Eureka Springs. The deadline for making room reservations is June 15. Reservations may now be made for sleeping rooms at the Inn of the Ozarks by calling 479-253-9768. Ask for the APA convention rate of $109. Registration packets for the convention will be released next week. A copy of the convention schedule can be found in this edition of the Arkansas Publisher Weekly.

Next Friday is deadline for return of APA ballots

Next Friday, May 25, is the deadline for return of ballots in the annual APA election. Designated voters are reminded to sign the outside of the envelope provided for the return of the ballot. A spot for that signature is clearly visible on the outside of the return envelope. Seven candidates will appear on the ballot, including the three new nominees, Kelly Freudensprung of The Saline Courier in Benton, John Robert Schirmer of the Nashville News-Leader and Crystal Costa of the Times Record in Fort Smith. Also on the ballot will be the continuing APA Board members: • Ellen Kreth of the Madison County Record in Huntsville • Sue Silliman of the Camden News • Lori Freeze of the Stone County Leader in Mountain View • Eliza Gaines of the Arkansas Democrat-Gazette in Little Rock The APA executive board does not appear on the ballot. They include: • President, Tom White of the Advance Monticellonian in Monticello • Vice President, John Bland of The Times Dispatch in Walnut Ridge • Immediate Past President, Byron Tate of The Sheridan Headlight • Second Vice President, Rusty Turner of the Northwest Arkansas DemocratGazette in Fayetteville

to branch out and do a magazine, she said ‘Just go for it.’ And we did. Ninety-nine percent of the time our ventures succeeded.” Pat’s husband was a dentist and not involved with hands-on management of the newspaper. When one angry man called to speak to the man in charge at the paper, she answered him, “I am the man in charge.” For years there was a rolled-up newspaper behind Pat’s desk at the Guard. A member of her church came by one day with a soaking-wet paper and threw it at her. He was mad because the carrier didn’t bag it. She handed him a dry paper and kept the one that had been tossed as a memento. Not much ruffled this newspaper veteran, but one day in January of 1981 the (Above) Pat, with late husband O.E., is a longtime choir unthinkable happened. Arson burned member at St. Paul’s Episcopal Church in Batesville. down the newspaper office. Pat (Below) Pat lounging in the pool. moved operations temporarily to a Jena said. “She hires people who have building they owned on Harrison Street. it in their blood to run newspapers, The people of Batesville jumped in to help who are dedicated to the paper and the get out the paper, and nearby newspapers community.” allowed them to print the paper on their Pat served as president of the Arkansas presses. Press Association (APA) in 1995. She “I was amazed and personally affected by remembers the year running very the way the whole community helped us. smoothly, except for a short incident We did not miss a day printing the paper,” with the late John Robert Starr. “We Pat said. Soon the newspaper moved to a used to have roundtable discussions at building on lower Main Street where they APA meetings, and I was talking about a installed new presses. story. When he asked why I pronounced Her son Ross has been instrumental midwifery as I did, I replied that was the at the paper contributing artwork and pronunciation in the AP Stylebook. He computer skills. Her daughter-in-law Lua, took offense and said if I worked for him, who runs the papers’ online publication, he would fire me. Since I didn’t, he got up came to Batesville from Vietnam with her and left.” family in the ‘70s. Recently Pat fractured her hip, but she “My father and mother helped support is mending and able to walk again. She Lua’s family when no one in town wanted plays bridge, knits and does the things to rent to them,” said daughter Jena Jones, that make her happy. She’s involved in her a local real estate agent. “Little did I know church and is on the board of Main Street Lua would end up my sister-in-law.” Batesville. Today she will be surrounded Being generous and open minded is a by her family, co-workers and community way of life for Pat. She takes stands that as they come together to celebrate her sometimes are not popular, like speaking retirement. on behalf of a restaurant’s liquor license “The paper really belongs to the at an Alcohol Beverage Control meeting community,” Pat said. “We run editorials and supporting the legalization of medical that might be liked or not liked. We take marijuana. the high road, but that doesn’t mean not “Mother taught me to be an independent going after the hard stories. We make woman, to think for myself, to stand on my sure people are informed. It works out in own two feet and to run my own business,” the end.”

Past Presidents’ Breakfast Invitation Only

Hotel Information Inn of the Ozarks

Located on 30 wooded acres, relax in spacious rooms and suites with plush top beds, dream maker pillows and balconies. Enjoy home-style cooking at Myrtie Mae’s Café. Take a dip in the outdoor pool, play mini golf or play on the game court which includes basketball, volleyball, and tennis, and enjoy poolside movies as well as a business center and free Wi-Fi.

Reserve hotel rooms by June 15 | $109 Single/Double Be sure to mention the Arkansas Press Association group name when reserving your room.

Holiday Island’s Golf courses are strategic courses. They offer 27 holes of golf at Holiday Island; an 18-hole championship course and a 9-hole executive course. Choosing the correct club and playing correct shots will challenge golfers at all levels. The views and the quiet are unmatched and will allow you a peaceful round of golf along with breathtaking scenery of the Ozark Mountains.

Paul J. Boyle is Senior Vice President/Public Policy for the News Media Alliance, a trade organization representing nearly 2,000 diverse news organizations. From the largest news groups to local newspapers to digital-only operations, the Alliance represents all news media content creators. Boyle is the chief lobbyist and manages the legislative and regulatory affairs operation of the association. Under Boyleâ&#x20AC;&#x2122;s leadership, the industry has preserved the current tax treatment of advertising expenses; resisted government efforts to reclassify independent contractors; reduced postal rates impacting newspapersâ&#x20AC;&#x2122; advertising products; preserved recruitment advertising in printed newspapers and obtained structural reforms to the Freedom of Information Act. He is currently managing the effort to beat back tariffs on newsprint imports from Canada. Boyle is a member of the American Society of Association Executives. He is a graduate of the University of California, Santa Barbara.

Lisa Tackett Griffin is a popular trainer at Macintosh training events around the United States. She is recognized as a pioneer in the areas of computer pagination, PDF technology, and remote printing methods for newspapers. Lisa is a staff member at the University of Tennessee/Tennessee Press Association Institute for Newspaper Technology and has conducted group training for press associations and newspapers on topics such as Newspaper Technology, Mac Troubleshooting, Adobe InDesign, Adobe Illustrator, Adobe PhotoShop, Quark Xpress, Pagination, PDF file creation and digital communications. Since 1983, Lisa has provided consultation, training and support to newspapers as well as other markets. Advances in technology over the past 20 years for the newspaper industry have been both exciting and sometimes challenging. Bringing this information through training sessions directly to people in the production process continues to be a priority. Attendees will find the material to be interesting, informative and applicable to their everyday workload.

Member of the Arkansas FOI Coalition

Join us for dinner, music & backstage tours at the newly renovated