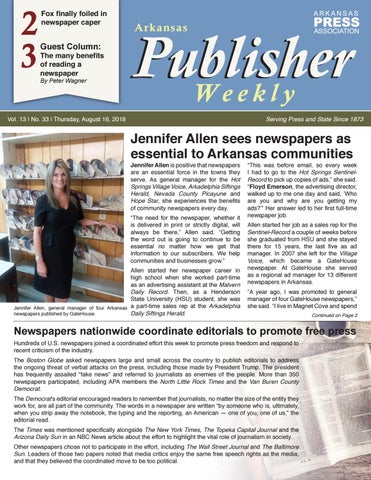 The many benefits of reading a newspaper By Peter Wagner

Jennifer Allen sees newspapers as essential to Arkansas communities Jennifer Allen is positive that newspapers are an essential force in the towns they serve. As general manager for the Hot Springs Village Voice, Arkadelphia Siftings Herald, Nevada County Picayune and Hope Star, she experiences the benefits of community newspapers every day. “The need for the newspaper, whether it is delivered in print or strictly digital, will always be there,” Allen said. “Getting the word out is going to continue to be essential no matter how we get that information to our subscribers. We help communities and businesses grow.” Allen started her newspaper career in high school when she worked part-time as an advertising assistant at the Malvern Daily Record. Then, as a Henderson State University (HSU) student, she was Jennifer Allen, general manager of four Arkansas a part-time sales rep at the Arkadelphia Daily Siftings Herald. newspapers published by GateHouse.

“This was before email, so every week I had to go to the Hot Springs SentinelRecord to pick up copies of ads,” she said. “Floyd Emerson, the advertising director, walked up to me one day and said, ’Who are you and why are you getting my ads?’” Her answer led to her first full-time newspaper job. Allen started her job as a sales rep for the Sentinel-Record a couple of weeks before she graduated from HSU and she stayed there for 15 years, the last five as ad manager. In 2007 she left for the Village Voice, which became a GateHouse newspaper. At GateHouse she served as a regional ad manager for 13 different newspapers in Arkansas. “A year ago, I was promoted to general manager of four GateHouse newspapers,” she said. “I live in Magnet Cove and spend Continued on Page 2

Newspapers nationwide coordinate editorials to promote free press Hundreds of U.S. newspapers joined a coordinated effort this week to promote press freedom and respond to recent criticism of the industry.

The Boston Globe asked newspapers large and small across the country to publish editorials to address the ongoing threat of verbal attacks on the press, including those made by President Trump. The president has frequently assailed “fake news” and referred to journalists as enemies of the people. More than 350 newspapers participated, including APA members the North Little Rock Times and the Van Buren County Democrat. The Democrat’s editorial encouraged readers to remember that journalists, no matter the size of the entity they work for, are all part of the community. The words in a newspaper are written “by someone who is, ultimately, when you strip away the notebook, the typing and the reporting, an American — one of you, one of us,” the editorial read. The Times was mentioned specifically alongside The New York Times, The Topeka Capital Journal and the Arizona Daily Sun in an NBC News article about the effort to highlight the vital role of journalism in society. Other newspapers chose not to participate in the effort, including The Wall Street Journal and The Baltimore Sun. Leaders of those two papers noted that media critics enjoy the same free speech rights as the media, and that they believed the coordinated move to be too political.

Industry Quote of the Week “There is no vigorous debate without a free and independent press.” – Philadelphia Inquirer Editorial Staff

time at each of the papers overseeing operations including advertising, editorial, circulation and bookkeeping. Each one is different, and the communities and newspapers have their own personalities. We have to be able to adapt each one to specific community needs.” Like communities, no two businesses are the same, according to Allen. Even those in the same category have unique needs and to be successful you have to help customers recognize their needs and give them solutions. Arkansas Press Association meetings have been a part of her professional life since 1993, and she particularly likes the

advertising seminars. “I want to hear what other newspapers are doing, find out what challenges them and learn how they meet those challenges,” Allen said. Her son, Jace Allen, and daughter-inlaw Laney live in Benton. Her four-legged family includes two mixed breed dogs and a grand-Pug. She enjoys yoga classes, shopping and going to movies. Allen believes in the value of being involved and helping meet community needs. Volunteering is important, and this year she serves as president of the Hot Springs Village Chamber of Commerce. “It’s all about giving back and being a part of the community,” she said.

a little VapoRub on his newspaper bag.

Newspapers were mysteriously disappearing from doorsteps in Eureka Springs.

“You can smell it kind of, so I’d be real careful getting it out of the plastic bag,” he said.

In one neighborhood, a dozen copies of the Arkansas Democrat-Gazette vanished over three weeks in July.

Whiting said he had called twice to report missed papers, and Litchford called him back to explain her fox theory and the VapoRub remedy.

Virginia Litchford, 76, knew good and well she and her daughter, Joy Salazar, had delivered those papers. But by sunrise they were gone. Finally Salazar found a suspect -- foxes. To test her hypothesis, Salazar slathered Vicks VapoRub on the outside of the plastic newspaper bags. It worked to keep cats off her furniture, she said, so she thought it might deter foxes, too. Sure enough, it did. A fox apparently carried one newspaper a few feet before finding it distasteful and dropping it on the lawn, Litchford said. Vicks VapoRub is a cough suppressant and topical analgesic made by Procter & Gamble. The active ingredients are synthetic camphor, eucalyptus oil and menthol. The carriers left notes to let customers know about their plan. “It kind of dries out real quick,” Litchford said of the ointment. “No one has complained.” Charles Whiting, 72, said he didn’t mind Arkansas Publisher Weekly

“We asked him if we could put Vicks salve on it, and he said sure,” Litchford said.

delivering the newspaper around 1 a.m. and finish about four hours later, Litchford said. They see a lot of animals on their route.

Whiting said a friend picked up his paper one day and told him someone was playing a joke on him. Then Whiting explained the scheme. Whiting also bought an “ultrasonic” pest animal repeller. “Since they did that and I put out this sensor, I haven’t missed a paper,” Whiting said. Litchford said the deliverers used the VapoRub for about eight days in a neighborhood that includes Owen and Hilton streets. If papers start disappearing again, they can reapply the VapoRub. Litchford and Salazar live in Berryville, 13 miles east of Eureka Springs. They begin 2

“We’ve hit a deer, and we’ve been hit by several deer,” she said. “They run into the side of our truck.” Litchford said she doesn’t know why the foxes were stealing newspapers. One theory is they use the paper in their dens. Robert “Butch” Berry, the Eureka Springs mayor, said he has seen more foxes in town over the past few years. “They just add to the wildlife that’s already here,” he said. Copyright 2018 Arkansas DemocratGazette. Reprinted with permission. August 16, 2018

Guest Column: The Many Benefits of Reading a Newspaper By Peter Wagner, Founder/publisher of The N’West Iowa REVIEW We’ve published at least three stories recently regarding older Sheldon citizens being scammed over the phone for thousands of dollars. But even though the first two crimes were printed in our Sheldon Mail-Sun in detail, a third individual was taken for soon after for $16,000.When asked by Sheldon police why she hadn’t learned from the stories reported in the newspaper, she replied, “I don’t read the newspaper.” We published the following editorial the next edition. If limited editing to make it local, It bears repeating in Association member papers across America. We have great empathy for the Sheldon woman who was cheated out of $16,000 recently. She fell victim to a scam on Facebook, according to Sheldon police chief Lyle Bolkema. She thought a cousin had contacted her and told her she was the winner of a $90,000 sweepstakes grant -but there were a few requirements. First she was asked for $2,000, which she paid. Realizing their deception was working, the crooks asked for another $7,500, and then $6,500 more. It was only after all the money was gone, never to be retrieved, that she learned there was no $90,000 prize. Someone had tricked her into believing they were her cousin, and she was the latest victim in online or telephone scams. The scammers h​ ave cost people across the country, including a growing list in Sheldon, thousands of dollars. The woman refused to accept the advice of staffers at two banks ​who warned her, and

said she was not aware of the number of scams that attempt to steal money from people through such deceptive and deplorable tactics. Bolkema has sounded the alarm numerous times, and local media, including The Sheldon Mail-Sun and The N’West Iowa REVIEW, have attempted to inform people of the con men and women who seek to prey upon people online or through phone calls. This latest victim said she had no knowledge of that, since she does not read local newspapers or follow other local media. She paid a costly price for that choice. There are tremendous benefits to reading a newspaper, and not just in warnings of potential scams or news of other crimes committed in the area. While there is a belief that newspapers are endangered species, we are feeling rather robust. Of course, we’re biased, but we recommend you read a paper for many reasons, including: Government news. You need to know what the city, our schools, county government and other public entities are doing. Good, bad or routine, it’s worth your time, especially since you’re the one paying for it. Informed opinion and comment. The Sheldon Mail-Sun invests space, time and resources into providing an Opinion page that offers an editorial, columns and letters to the editor. We seek to provide balanced views that allow you to become informed whole offering space, at no cost, for you to respond. We believe that’s a crucial role newspapers play in the American experiment, and one protected by the

Constitution. Community news: Who gave birth? Who died? Who was married and who is engaged? The newspaper documents the events of the day, providing the first history of our town. Local sports: Who won and why? Who lost and what happened? What records were set and what inspiring events occurred in Sheldon? Who is coaching the team and what is the next big event on the schedule? You can follow your favorite athlete or team through the newspaper and no other source will provide the information you want. Entertainment. The Sheldon Mail-Sun runs photos, feature stories and columns that inform and delight our readers, with Millie Vos revealing the story behind our history, Ty Rushing providing humorous and interesting personal stories and other columnists offering cooking tips, religious comments and other input. The paper provides you with information you may not have to have -- but you’re glad to learn and see. Advertising? What’s on sale? Are there coupons for items you need or want to buy? What new products are being offered? What new business opened? Newspapers remain an incredible bargain, and the information available in display and classified advertising can make it a profitable purchase for you. There are numerous other reasons to pick up a newspaper and become informed. It may help you learn of a scam that could cost you a great deal of money, too.