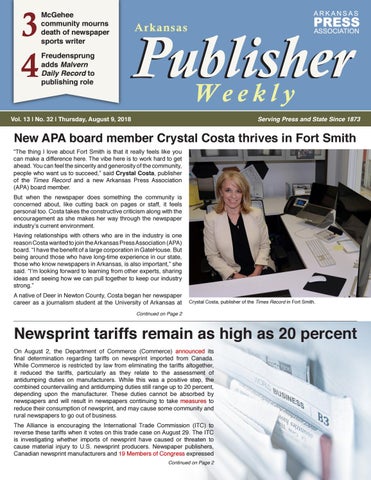 “The thing I love about Fort Smith is that it really feels like you can make a difference here. The vibe here is to work hard to get ahead. You can feel the sincerity and generosity of the community, people who want us to succeed,” said Crystal Costa, publisher of the Times Record and a new Arkansas Press Association (APA) board member.

But when the newspaper does something the community is concerned about, like cutting back on pages or staff, it feels personal too. Costa takes the constructive criticism along with the encouragement as she makes her way through the newspaper industry’s current environment. Having relationships with others who are in the industry is one reason Costa wanted to join the Arkansas Press Association (APA) board. “I have the benefit of a large corporation in GateHouse. But being around those who have long-time experience in our state, those who know newspapers in Arkansas, is also important,” she said. “I’m looking forward to learning from other experts, sharing ideas and seeing how we can pull together to keep our industry strong.” A native of Deer in Newton County, Costa began her newspaper career as a journalism student at the University of Arkansas at

Crystal Costa, publisher of the Times Record in Fort Smith.

Newsprint tariffs remain as high as 20 percent On August 2, the Department of Commerce (Commerce) announced its final determination regarding tariffs on newsprint imported from Canada. While Commerce is restricted by law from eliminating the tariffs altogether, it reduced the tariffs, particularly as they relate to the assessment of antidumping duties on manufacturers. While this was a positive step, the combined countervailing and antidumping duties still range up to 20 percent, depending upon the manufacturer. These duties cannot be absorbed by newspapers and will result in newspapers continuing to take measures to reduce their consumption of newsprint, and may cause some community and rural newspapers to go out of business. The Alliance is encouraging the International Trade Commission (ITC) to reverse these tariffs when it votes on this trade case on August 29. The ITC is investigating whether imports of newsprint have caused or threaten to cause material injury to U.S. newsprint producers. Newspaper publishers, Canadian newsprint manufacturers and 19 Members of Congress expressed Continued on Page 2

Industry Quote of the Week

Little Rock working on The Forum. Her mom gave her a tip on a job at The Leader in Jacksonville when she was completing her Master’s in Technical Writing. Initially she was a part-time graphic artist and worked her way to become editor of the publication. “It was great exposure to the newspaper industry,” she said. “You had to do everything – layout, report, edit – and the hours were long.” She left The Leader in 2003 for an eightto-five job at the Arkansas DemocratGazette where she wrote advertorials and special section copy. When Estel Jeffery left the paper, her mentor Paul Smith asked her to manage the design and editorial staff of the monthly lifestyle magazine Arkansas Life, as well as the weekly alternative newspaper Sync.

Costa later moved to the Northwest Arkansas Democrat-Gazette, where she spent six years overseeing their sales, promotional and marketing efforts before taking a break from newspapers to become marketing director for three McLarty Daniel Automotive dealerships in Bentonville.

“I decided I wanted to come back to newspapers and just had my two-year anniversary as publisher at the Times Record,” Costa said. “I’m excited to represent GateHouse and to see how I can help out on the APA board.”

We want to know about your new hires, retires and promotions! Send your staffing changes to info@arkansaspress.org to be updated online and included in our weekly bulletin and monthly newsletter.

Crystal Costa in the newsroom at the newspaper’s newly remodeled 12,000-square-foot suite on the second floor of Central Mall. In July, the newspaper moved from its longtime home at 3600 Wheeler Ave. in Fort Smith to the current location.

opposition to these tariffs at an ITC hearing last month. The Teamsters and the Communications Workers of America also oppose these tariffs. The newsprint market is highly regional. West Coast and East Coast mills – whether in the U.S. or Canada – do not compete with one another. A majority of the domestic paper industry firmly believes that the tariffs will harm U.S. newsprint producers, as newspapers and printers reduce their consumption of newsprint in response to higher costs. In short, the tariffs will hurt the very industry that they are supposed to protect. This is not how Congress intended the trade laws to be used. The ITC must reverse these tariffs to prevent future harm to publishers, 2

printers and domestic paper producers. If the ITC does not reverse these tariffs on August 29, these duties will continue to cause harm in the marketplace, unless Congress stops them. Action Requested: We encourage you to contact our Arkansas representatives and senators and ask that they co-sponsor the PRINT Act (S. 2835 / H.R. 6031), which would pause the collection of newsprint tariffs until further study is done on the impact on publishers and printers. We have provided background and talking points to aid you in your outreach. To date, 31 senators and 38 representatives have co-sponsored the legislation. Our goal is to reach 60 co-sponsors in the Senate and 100 in the House before Labor Day. August 9, 2018

Darren Craig Gill, 52, of McGehee, Arkansas, passed away Thursday, July 26, 2018 at McGehee Hospital. Known to many of his friends as “Buki”, he was born in Dermott, Arkansas on May 27, 1966 to F.H. and Harriet Coulter Gill. Darren was a 1984 graduate of McGehee High School and earned a Bachelor’s Degree from the University of Arkansas. He worked for Gill Farm Supply for 20 years then was an insurance agent for Shelter Insurance for 14 years. Darren also worked as a football reporter and sports columnist for the McGehee Dermott Times-News for thirteen seasons. Darren enjoyed woodworking and remodeling projects. His true passion, however, was coaching youth sports and most of all, helping others. Through his years of coaching, Darren impacted the lives of hundreds of young people throughout southeast Arkansas. Darren was a member of Antioch Baptist Church and the McGehee Men’s Club. Other than his parents, he is survived by his wife, Anita Fletcher Gill; sons, Grant Gill of Jonesboro, AR and Payton Savage of McGehee, AR; brother, Chris (Bridgett) Gill of McGehee, AR; grandmother Emmer Elizabeth Coulter of Jacksonville, AR; a host of nieces and nephews and many friends. Visitation was held from 4-6p.m. Saturday, July 28, 2018 at Griffin-Culpepper Funeral Service in McGehee, AR. Funeral Services were held at 2p.m. Sunday, July 29, 2018 at First Baptist Church in McGehee with Dr. Ed Balducci and Rev. Kenny Culpepper officiating. Burial followed at McGehee Cemetery.

Darren Gill passed away suddenly last Thursday, shocking members of the McGehee Owl Nation. Gill graduated from McGehee High School in 1984 where he was an All-District football player and Homecoming Co-Captain. His passionate devotion to the McGehee Owls continued throughout his life, leading him to become the sports writer for the Times-News in his spare time. For the last thirteen years, he could be found on the sidelines or in the stands at Owl football games covering the team. Gill’s loss has not just been felt by Owl Nation, but by the entire community. Employees of his favorite morning breakfast stop, Cash’s Quik Check, released red and white balloons as the funeral procession passed by Sunday afternoon.

Darren hugging his son Grant Gill when Grant played for the Owls about ten years ago.

In this webinar, the News Media Alliance and the American Press Institute (API) will present Alliance research on how data can be used to grow digital subscription and API’s recently released “Paths to Subscription.” Learn how these findings can be applied to your publication. * member log-in required to register. If you need help, please email membership@ newsmediaalliance.org

An online guest book may be signed at the Griffin-Culpepper Funeral Service website.

Send items for Jobs Bulletin APA member newspapers are reminded that if you have job openings or if you’re looking to sell a piece of equipment or anything else, you can post it in the APA’s “Jobs Bulletin”. The deadline to submit information is the close of business on Tuesday to be released on Wednesday. APA members and associates receive a weekly email and it can be found on the APA website. Email items to info@arkansaspress.org. Arkansas Publisher Weekly

“I have worked with Richard and have printed the Malvern Daily Record for more than three years,” Freudensprung said. “We are each owned by the same company and the proximity of these two distinct markets makes this a natural fit.” During his more than 37 years of newspaper experience, Freudensprung has worked in all facets of the newspaper business. “I have thrown paper routes, stuffed advertising inserts into papers, worked in the darkroom (when there was a darkroom), written stories, taken photographs and sold advertising,” he said. Freudensprung has worked with more than a half dozen newspapers, from Texas to Missouri. He also was advertising director at The Baxter Bulletin in Mountain Home, Ark. from 2001 to 2010. He grew up the son of a career Marine, so

moving around in the newspaper business has not been all that different. “I was born on the west coast and lived in two different states on the east coast before my dad retired and the family moved to Texas when I was eleven,” Freudensprung recalls. He said that although he has lived in many different places, Arkansas is home for good. “I don’t think my in-laws in Mountain Home would let us get too far away,” he continued. “Richard Folds leaves big shoes to fill in the Malvern market, but he certainly left a well-trained, dedicated team, making my job much easier,” Freudensprung added. Freudensprung said that the people he has met so far have been welcoming. “I look forward to meeting more people and finding ways to get involved in the community,” he said. Freudensprung’s wife, Amanda, is an Arkansas native and a teacher with the Benton School District and their daughter, Beth, attends Benton Middle School. He currently serves on the Arkansas Press Association Board, the Benton Chamber of Commerce Board and is president of the Benton-Bauxite Rotary Club. Freudensprung said that he enjoys traveling with his family, woodworking and buying and selling antiques. Story and photo from the Malvern Daily Record.

Club – a listing of all member newspapers that have run every ad scheduled through APS this year with no errors. At the end of the year, APS will reward a newspapers still on the list for their staffs’ hard work and dedication to perfection.