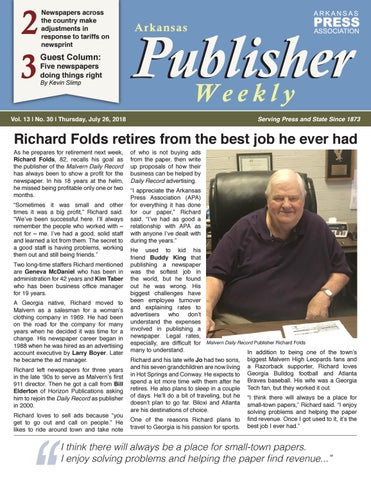 Richard Folds retires from the best job he ever had

As he prepares for retirement next week, Richard Folds, 82, recalls his goal as the publisher of the Malvern Daily Record has always been to show a profit for the newspaper. In his 18 years at the helm, he missed being profitable only one or two months. “Sometimes it was small and other times it was a big profit,” Richard said. “We’ve been successful here. I’ll always remember the people who worked with – not for – me. I’ve had a good, solid staff and learned a lot from them. The secret to a good staff is having problems, working them out and still being friends.” Two long-time staffers Richard mentioned are Geneva McDaniel who has been in administration for 42 years and Kim Taber who has been business office manager for 19 years. A Georgia native, Richard moved to Malvern as a salesman for a woman’s clothing company in 1969. He had been on the road for the company for many years when he decided it was time for a change. His newspaper career began in 1988 when he was hired as an advertising account executive by Larry Boyer. Later he became the ad manager. Richard left newspapers for three years in the late ‘90s to serve as Malvern’s first 911 director. Then he got a call from Bill Elderton of Horizon Publications asking him to rejoin the Daily Record as publisher in 2000. Richard loves to sell ads because “you get to go out and call on people.” He likes to ride around town and take note

of who is not buying ads from the paper, then write up proposals of how their business can be helped by Daily Record advertising. “I appreciate the Arkansas Press Association (APA) for everything it has done for our paper,” Richard said. “I’ve had as good a relationship with APA as with anyone I’ve dealt with during the years.”

He used to kid his friend Buddy King that publishing a newspaper was the softest job in the world, but he found out he was wrong. His biggest challenges have been employee turnover and explaining rates to advertisers who don’t understand the expenses involved in publishing a newspaper. Legal rates, especially, are difficult for Malvern Daily Record Publisher Richard Folds many to understand. In addition to being one of the town’s Richard and his late wife Jo had two sons, biggest Malvern High Leopards fans and and his seven grandchildren are now living a Razorback supporter, Richard loves in Hot Springs and Conway. He expects to Georgia Bulldog football and Atlanta spend a lot more time with them after he Braves baseball. His wife was a Georgia retires. He also plans to sleep in a couple Tech fan, but they worked it out. of days. He’ll do a bit of traveling, but he “I think there will always be a place for doesn’t plan to go far. Biloxi and Atlanta small-town papers,” Richard said. “I enjoy are his destinations of choice. solving problems and helping the paper One of the reasons Richard plans to travel to Georgia is his passion for sports.

find revenue. Once I got used to it, it’s the best job I ever had.”

I think there will always be a place for small-town papers. I enjoy solving problems and helping the paper find revenue...”

Industry Quote of the Week “It was while making newspaper deliveries, trying to miss the bushes and hit the porch, that I first learned the importance of accuracy in journalism.” – Charles Osgood

Newspapers across the country make adjustments in response to tariffs on newsprint As the fight to suspend newsprint tariffs continues, Paul Boyle, senior vice president of public policy with the News Media Alliance is collecting press reports showing that newspapers across the country are being forced to reduce publication days or shift to digital-only in response to tariffs on newsprint.

“Some of these reports were worked into testimony that Members of Congress gave at the International Trade Commission (ITC) hearing on July 17,” Boyle said. “They fit into our narrative that the newsprint tariffs will ultimately hurt the U.S. industry that they are designed to protect.” Boyle will continue to collect reports to file with the ITC until August 20, which is the close of the public comment period. “I know several Arkansas newspapers are being negatively affected by these tariffs,” said APA Executive Director Ashley Wimberley. “Please send the APA statistics or news stories that run in your local newspaper proving the impact of the tariffs on your operation, and we will share with the News Media Alliance.”

Some of the stories/examples that have been shared with Boyle include the following (click on newspaper names in red to link to news story): Newspapers Cutting Publication Days Colorado The Daily Sentinel, Grand Junction The Greeley Tribune Mississippi Vicksburg Post from 7 to 5 days The Natchez Democrat from 7 to 5 days Nevada The Lahontan Valley News from 2 days to 1 day The Nevada Appeal from 6 to 2 days The Record-Courier from 3 to 2 days The Tahoe Tribune from 3 to 1 day Pennsylvania Pittsburgh Post-Gazette from 7 to 5 days Newspapers Moving from Print to Digital Ohio Madison Press, London

(Left) Kelly Freudensprung, publisher of The Saline Courier in Benton, presents a gift to Lynda Hollenbeck at a community reception in her honor held today at the newspaper. (Right) Ashley Wimberley, executive director of the Arkansas Press Association, presents Hollenbeck with a Golden 50 Service Award for her five decades in the industry.

Guest Column: Five Newspapers Doing Things Right By Kevin Slimp, Publisher and News Guru, Newspaper Academy Over the past week or so, I received an email from a publisher asking if I could send examples of community newspapers who are doing things right. His plan was to contact these publishers to learn if he could benefit from their experiences. I told him I would give it some thought and send him a list of papers and contacts, but now I can’t seem to find his message hidden in the thousands of emails that have filled my in-box in the days since his message arrived. I could have included papers I’ve visited over the past year in Kansas, Nebraska, Arizona and other places, but I decided five was all that would fit in this space, so here is my 2018 “Doing things right” list. The Gloucester-Mathews Gazette-Journal When Elsa Verbyla invited me to visit her newspaper on the shores of Eastern Virginia, I wasn’t sure what to expect. After arriving, I was most surprised by the accents of the good folks of Mathews, a town just down the road from Gloucester. But that’s another story for another day. My second biggest surprise was meeting with the staff of the Gazette-Journal and learning first-hand how much they love their newspaper. I spent two days with the group discussing everything from sales to circulation to design. I learned about great ideas they’ve had to increase circulation and maintain readership in an area like many, where a bigcity daily threatens to absorb their readers. No worry, though. The folks of Gloucester and Mathews, I learned, love their newspaper. Like many of the most successful papers I run across, so do the staff members. As I visited with them, it was hard to find one who had been around less than 10 years. “Oh, I’ve been here 20 years,” one told me. Another, “15 years and counting.” With multiple sections, plenty of advertising, and no shortage of stories, it’s no wonder The Gloucester-Mathews Gazette-Journal makes my list. Madelia Times Messenger The first time Michelle Van Hee invited me to visit her paper in Madelia, I had to get out a map. In all my travels across Minnesota, I didn’t remember Madelia. Now, it’s a regular Arkansas Publisher Weekly

stop for me. After three trips to visit The Madelia Times Messenger, it makes my list of

One of the best examples of the Messenger’s spirit is their leadership following a fire that destroyed much of their downtown in 2017. When I last visited her town, Michelle couldn’t wait to show me the renovation of the downtown area. The Standard Banner, Jefferson City I’ve been to Jefferson City to work with the staff of The Standard Banner many times through the years, and I’m still surprised each time I visit.

how much I was going to grow to love the folks at his newspapers. Since then, Wade has added a few nameplates to his collection, but each is distinctively local and it shows. Beautiful design, quality writing, beautiful printing, and local focus are the hallmarks of the papers in the Kanabec group. In a recent trip to Cambridge, to visit with Wade’s staff there, I was reminded of the reason people get into community journalism in the first place. I saw pride in each face of the 30 or so staff members as we looked at their stories, photos and pages. What makes their newspapers stand out? Topping the list would be the local focus and the attention to quality. The Neepawa Banner & Press

When I visited just last week, I asked Dale Gentry, publisher, “How is business?” For some reason, I wasn’t surprised with his answer. “Business is great!” he beamed. “Especially the last two months. Things are going really well.” Why are things “great” in Jefferson City? Just spend a day with the staff of the newspaper and you will know. Like the paper in Gloucester, Virginia, staff doesn’t come and go at The Standard Banner. You will find folks who have been on staff for decades. I remember meeting Kim Cook, designer, when she showed up early for my first Newspaper Institute in 1997. I didn’t count the pages, but I bet the page count of twice-weekly paper in Jefferson City rivals that of the metro 40 miles away. The Standard Banner has been on my favorite list for a long time, and isn’t leaving any time soon. Kanabec Group, Minnesota When Wade Weber first invited me to visit his paper in Mora, Minnesota more than a dozen years ago, I had no idea 3

My list couldn’t be complete without mentioning The Neepawa Banner & Press in Neepawa, Manitoba. Over the past few years, I’ve come to really appreciate the work Ken Waddell and his staff do in Manitoba. I’ve never seen Ken without his brown brimmed hat and a smile on his face. His enthusiasm spreads throughout his newspaper and it shows.  I’ve met with his staff multiple times to look at their papers, discuss strategy, and plan new ventures. The newspaper has great designers, editors and writers who care about their community. Ask Ken about his secret, and the answer is always the same. “We keep it local.” Hardly a week goes by that I don’t hear from Ken or Kate Jackman, Banner & Press editor, with ideas to discuss. No wonder readers love their paper. Plenty more out there It’s never easy comprising a list like this. There are plenty of other papers, just as worthy, that could be included, but these five should give you a good start. July 26, 2018