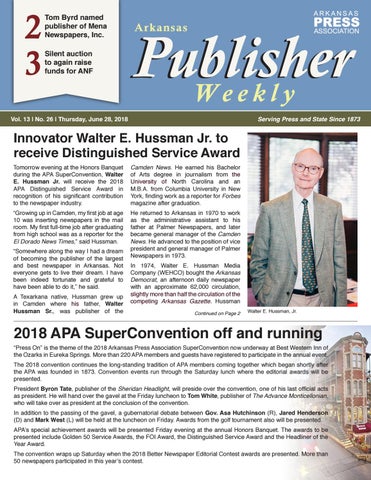 Tomorrow evening at the Honors Banquet during the APA SuperConvention, Walter E. Hussman Jr. will receive the 2018 APA Distinguished Service Award in recognition of his significant contribution to the newspaper industry.

Camden News. He earned his Bachelor of Arts degree in journalism from the University of North Carolina and an M.B.A. from Columbia University in New York, finding work as a reporter for Forbes magazine after graduation.

“Growing up in Camden, my first job at age 10 was inserting newspapers in the mail room. My first full-time job after graduating from high school was as a reporter for the El Dorado News Times,” said Hussman.

“Somewhere along the way I had a dream of becoming the publisher of the largest and best newspaper in Arkansas. Not everyone gets to live their dream. I have been indeed fortunate and grateful to have been able to do it,” he said. A Texarkana native, Hussman grew up in Camden where his father, Walter Hussman Sr., was publisher of the

In 1974, Walter E. Hussman Media Company (WEHCO) bought the Arkansas Democrat, an afternoon daily newspaper with an approximate 62,000 circulation, slightly more than half the circulation of the competing Arkansas Gazette. Hussman Continued on Page 2

2018 APA SuperConvention off and running

“Press On” is the theme of the 2018 Arkansas Press Association SuperConvention now underway at Best Western Inn of the Ozarks in Eureka Springs. More than 220 APA members and guests have registered to participate in the annual event. The 2018 convention continues the long-standing tradition of APA members coming together which began shortly after the APA was founded in 1873. Convention events run through the Saturday lunch where the editorial awards will be presented. President Byron Tate, publisher of the Sheridan Headlight, will preside over the convention, one of his last official acts as president. He will hand over the gavel at the Friday luncheon to Tom White, publisher of The Advance Monticellonian, who will take over as president at the conclusion of the convention. In addition to the passing of the gavel, a gubernatorial debate between Gov. Asa Hutchinson (R), Jared Henderson (D) and Mark West (L) will be held at the luncheon on Friday. Awards from the golf tournament also will be presented. APA’s special achievement awards will be presented Friday evening at the annual Honors Banquet. The awards to be presented include Golden 50 Service Awards, the FOI Award, the Distinguished Service Award and the Headliner of the Year Award. The convention wraps up Saturday when the 2018 Better Newspaper Editorial Contest awards are presented. More than 50 newspapers participated in this year’s contest.

Tom Byrd named Walter E. Hussman Jr. Continued from page 1 publisher of Mena moved to Little Rock to become publisher. headlines nationwide by offering a the late ‘70s the Democrat started digital subscription to subscribers via an Newspapers, Inc. Inrunning free want ads that more than iPad to replace the delivery of a printed

Veteran community newspaper leader Tom Byrd has been named publisher of Mena Newspapers, Inc., which includes the Mena Star, Ouachita Trading Post, Waldron News, The DeQueen Bee and The Citizen, as well Tom Byrd as magazines, niche products and community websites serving west Arkansas. With more than 30 years of newspaper experience, Byrd previously was publisher of the Delaware State News, a daily community newspaper in Dover, Delaware. He has sales management and publisherlevel experience at community newspaper groups in California, Michigan and Florida. “Nothing can convey a sense of place and connection between people like a good community newspaper,” said Byrd. “I love being involved, whether it’s helping engage and inform readers, building a better community or finding more effective solutions for local advertisers.”

tripled the size of the paper’s classified section, and in 1979 it became an allmorning publication. Circulation totals showed that the Democrat was the fastest growing newspaper in the United States in 1980. After 13 years of competition, the Arkansas Gazette closed after publishing a final edition on October 18, 1991. The Democrat purchased all the assets of the Gazette and renamed the combined newspaper the Arkansas DemocratGazette.

Since that time, the company has made additional newspaper purchases, including among others, the Chattanooga (Tenn.) Times and Free Press, and the Jefferson City (Mo.) News Tribune, formed new newspaper partnerships and launched new cable television products and services. The Arkansas Democrat-Gazette’s statewide circulation has more than doubled since purchased by WEHCO. Recently the Democrat-Gazette made

In 2008, Hussman was named Publisher of the Year by Editor and Publisher magazine. He was a member of the board of directors of The Associated Press from 2000 to 2009 and of C-Span from 1995 to 2003. A valued community leader, Hussman has championed education and afterschool programs in Little Rock and the state of Arkansas. While on the Arkansas Symphony Orchestra Society board of directors, he started Pops on the River, a patriotic symphony and fireworks show that marks the Independence Day holiday and celebrates its 35th consecutive performance this year. “Walter’s innovations in newspaper publishing have been an asset to our state as well as for the industry nationally,” said Ashley Wimberley, APA executive director. “So many eyes are on Mr. Hussman’s next move, as he’s an amazing forward thinker. We are pleased to honor him this year with APA’s Distinguished Service Award.”

Byrd is no stranger to the mid-South. He was born and raised in southeast Oklahoma, one of 1,500 babies delivered by his father, a physician in Coalgate. He and his wife Pam, both graduates of the University of Oklahoma, have been married 34 years and have two children, a son in graduate school and a daughter who is a junior in college. Byrd replaces Whitney White who served as interim publisher. She will return to her previous position as general manager of the company’s newspapers in southeast Arkansas. “This is an exciting time to be coming on board,” said Byrd. “We have tremendous history and strength with our existing publications, but are firmly focused on the future, especially with new tools coming available to tell the local story and improve results for our customers.”

Golfers were treated to an excellent outing on the Holiday Island Country Club course at the annual APA Golf Tournament yesterday. Sponsored by AT&T and UAMS, the tourney raises funds for the Arkansas Newspaper Foundation. The golf tourney again kicked off this year’s APA convention.

Would you treasure a football signed by Dallas Cowboy great Troy Aikman? Does your mouth water when reading all about Arkansas pies? Do you hate to shop but really want a new handbag for summer?

Industry Quote of the Week “In many ways, the effort to meet the information needs of a community is the ultimate public benefit — helping to bring news and coverage to a geographic or other community to help them make better decisions and be better informed.” – Don Day, Stanford JSK Fellow