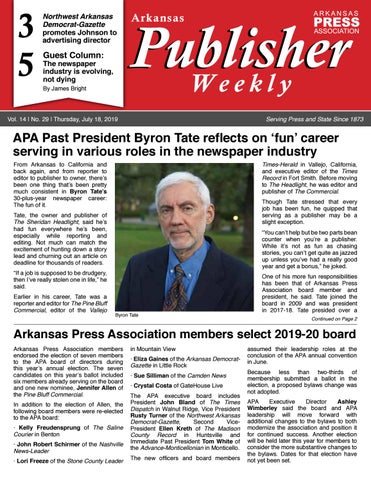 The newspaper industry is evolving, not dying By James Bright

Times-Herald in Vallejo, California, and executive editor of the Times Record in Fort Smith. Before moving to The Headlight, he was editor and publisher of The Commercial.

From Arkansas to California and back again, and from reporter to editor to publisher to owner, there’s been one thing that’s been pretty much consistent in Byron Tate’s 30-plus-year newspaper career: The fun of it.

Though Tate stressed that every job has been fun, he quipped that serving as a publisher may be a slight exception.

Tate, the owner and publisher of The Sheridan Headlight, said he’s had fun everywhere he’s been, especially while reporting and editing. Not much can match the excitement of hunting down a story lead and churning out an article on deadline for thousands of readers.

“You can’t help but be two parts bean counter when you’re a publisher. While it’s not as fun as chasing stories, you can’t get quite as jazzed up unless you’ve had a really good year and get a bonus,” he joked.

“If a job is supposed to be drudgery, then I’ve really stolen one in life,” he said. Earlier in his career, Tate was a reporter and editor for The Pine Bluff Commercial, editor of the Vallejo

One of his more fun responsibilities has been that of Arkansas Press Association board member and president, he said. Tate joined the board in 2009 and was president in 2017-18. Tate presided over a Continued on Page 2

Arkansas Press Association members select 2019-20 board Arkansas Press Association members endorsed the election of seven members to the APA board of directors during this year’s annual election. The seven candidates on this year’s ballot included six members already serving on the board and one new nominee, Jennifer Allen of the Pine Bluff Commercial. In addition to the election of Allen, the following board members were re-elected to the APA board: · Kelly Freudensprung of The Saline Courier in Benton · John Robert Schirmer of the Nashville News-Leader · Lori Freeze of the Stone County Leader

in Mountain View · Eliza Gaines of the Arkansas DemocratGazette in Little Rock · Sue Silliman of the Camden News · Crystal Costa of GateHouse Live The APA executive board includes President John Bland of The Times Dispatch in Walnut Ridge, Vice President Rusty Turner of the Northwest Arkansas Democrat-Gazette, Second VicePresident Ellen Kreth of The Madison County Record in Huntsville and Immediate Past President Tom White of the Advance-Monticellonian in Monticello. The new officers and board members

assumed their leadership roles at the conclusion of the APA annual convention in June. Because less than two-thirds of membership submitted a ballot in the election, a proposed bylaws change was not adopted. APA Executive Director Ashley Wimberley said the board and APA leadership will move forward with additional changes to the bylaws to both modernize the association and position it for continued success. Another election will be held later this year for members to consider the more substantive changes to the bylaws. Dates for that election have not yet been set.

leadership change on the APA staff in early 2018, and he said during his tenure the board focused on developing a stronger relationship with APA staff to the benefit of all members. “We have gone through some interesting times as a board and have worked well together,” Tate said. “ … You don’t have to look around too far to see that other states do not have even a semblance of the type of organization we have in Arkansas. Our newspapers are fortunate to be part of an association that has worked hard and defended newspapers and defended the First Amendment. We take the press association for granted sometimes, but if people only knew how much benefit the state’s newspapers get, it’s just phenomenal.” Tate became involved in APA leadership after years of attending association conventions representing the newspapers he served. He encouraged others to consider being involved in APA leadership, even if there’s a learning curve. “First, when people step in to the room and sit down, they’re thinking, ‘What did I get myself into?’” he said, “but, by the time you leave you can just about finish people’s sentences. You know what’s going on. You’ve been there and done it. … Its fun to meet with and work with some smart people.” He and publishers across the country have relied on those core relationships to face the challenges of being a newspaper owner. Those obstacles have increased over the last decade or so as the newspaper industry and younger generations both change, Tate said. He and other owners of small newspapers

Dennis Byrd, Glenn Waits, Byron Tate and Stephen Dorris made up the winning team at the 2014 Annual APA Golf Tournament.

have found it much more difficult in recent years to recruit and retain good reporters. He attributes that to the financial realities of the newspaper business and to generational trends where younger professionals don’t stay as long in any one job. The Sheridan Headlight participates in the Arkansas Newspaper Foundation summer internship program, and Tate looks at the internship program as a positive recruiting tool. However, he cautions editors and publishers of smaller weeklies not to expect a long-term commitment from a new hire. “I’m not sure what the strategy is other than looking for quality candidates wherever you find them and making sure they can contribute for at least six to eight months,” Tate said. Tate is an adjunct professor at the

University of Arkansas at Little Rock, where he teaches a careers class to journalism majors. He said he’s only half-joking sometimes when he asks why the communications majors aren’t enrolled in nursing or business classes. He’s encouraged to know that they, too, recognize the industry’s challenges but have a calling to serve as journalists, regardless. “They should go in with their eyes wide open about the influences on the profession and the many possible outcomes that may not necessarily be what they were expecting,” Tate said. “But if they are aware of such, and their passion takes them headfirst into this business, they have my undying gratitude. I don’t know where we would be without them. And in today’s world, their presence is more and more crucial to a free society.”

Diane Ciotta, the featured speaker at this year’s Arkansas Press Association A d v e r t i s i n g Conference, will host a webinar next week to help advertising professionals in creating budgets.

The 50-minute webinar is scheduled for Wednesday, July 24, at 1 p.m. The training will teach salespeople how to help advertisers set their advertising budgets to achieve maximum return. Ciotta will discuss “powerful principles that impact ultimate results.” According to the webinar organizer, she will share “proven successful techniques” for consulting with clients, establishing reasonable and comfortable investment amounts and making the right recommendations for a propect’s business needs vs. their advertising wants.

The cost is $49. Register at https:// newspaperacademy.com/webinar/dianeciotta-helping-advertisers-developappropriate-budgets/

She and her family live in Neosho, Mo., but are relocating to Northwest Arkansas next month, the newspaper said.

What’s Growing on in Arkansas?

Our team of experts can help you tell the story of our state’s #1 industry Public Relations Contacts:

THE BEST SOURCE FOR AGRICULTURAL INFORMATION.

The newspaper industry is evolving, not dying By James Bright Texarkana Gazette Newspapers are dying. No one reads newspapers anymore. The advertising doesn’t work. These are the most com­ mon indictments of our business. A suspected casualty of the digital age, it is no secret that print publica­tions have had and continue to have a tough row to hoe.

consumption has changed. In our own house, we have Gazette associates that only read print and those who prefer only digi­tal. We have multiple audi­ences and given the tools at our disposal, we endeavor to cater to them all. That is part of our evolution.

Yet just this month Google, the king of all things digi­tal, spent tens of thousands of dollars in advertising to promote an event in Arkansas. There is no ignoring the subtext here. Arguably the largest company in the world that sets the standard for digital market­ing finds value in buying ads in newspapers.

Our digital platforms allow us to create a more robust dissemination of the news while also offering a plethora of marketing tools for our advertisers. The Gazette has evolved from a newspa­ per company to multimedia company, and we embrace this evolution. Today, news is more accessible than it has ever been and our goal has and always will be to create products that cut through falsehoods and hyperbole to provide hard­-hitting news steeped in the truth.

And this campaign isn’t ending in the Natural State. Google plans to host events in multiple geographic regions of the Union spending what will amount to millions of dollars in print advertising. Like anything, a lie that is constantly perpetuated is eventually regarded as the truth. And the real truth is newspapers are not dying, but they are evolving. Like any media, the public’s preferred

We endeavor to see our dig­ital audience grow because we can offer so much more through that medium than any other. But we are not abandoning print and nei­ther are advertisers. Marketing is far more nuanced than it’s ever been. We provide promotional

approaches with a litany of opportunities that are both broad spectrum and surgical in practice. That is the goal of our evolution and the principal force behind our embracing this evolu­tion. We can serve the peo­ple who keep our doors open more effectively by manag­ing the dance of print and digital. We were blessed to see a good deal of print advertis­ ing come from Google to The Gazette this month. And while we are thankful for the revenue, we are more thankful for the clear message it sends. Newspapers, The Gazette and print media are not dying. That argument is a fallacy. In fact, we are growing, and in Texarkana, we are just getting started. James Bright is the general manager of the Texarkana Gazette in Texarkana. Email him at jbright@texarkanagazette. com. This column is reprinted from the Texarkana Gazette with permission.