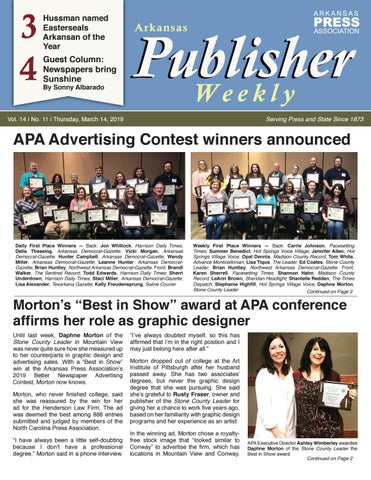 Morton’s “Best in Show” award at APA conference affirms her role as graphic designer Until last week, Daphne Morton of the Stone County Leader in Mountain View was never quite sure how she measured up to her counterparts in graphic design and advertising sales. With a “Best in Show” win at the Arkansas Press Association’s 2019 Better Newspaper Advertisng Contest, Morton now knows. Morton, who never finished college, said she was reassured by the win for her ad for the Henderson Law Firm. The ad was deemed the best among 888 entries submitted and judged by members of the North Carolina Press Association. “I have always been a little self-doubting because I don’t have a professional degree,” Morton said in a phone interview.

“I’ve always doubted myself, so this has affirmed that I’m in the right position and I may just belong here after all.”

Morton dropped out of college at the Art Institute of Pittsburgh after her husband passed away. She has two associates’ degrees, but never the graphic design degree that she was pursuing. She said she’s grateful to Rusty Fraser, owner and publisher of the Stone County Leader for giving her a chance to work five years ago, based on her familiarity with graphic design programs and her experience as an artist. In the winning ad, Morton chose a royaltyfree stock image that “looked similar to Conway” to advertise the firm, which has locations in Mountain View and Conway.

The ad, “Everyday Law for Everyday Arkansans,” conveys an approachable firm that handles the legal needs of the typical Arkansas family.

“I came up with the slogan on the ﬂy, and I just wanted the ad to portray familiarity, comfort and security in what he was promoting,” she said. “In the image, there were so many colors that played off each other to give it a calming effect – blues and greens and light sources that were interesting and appealing.” It’s the second advertisement Morton has done for the law firm, and she said she was eager to tell the client about the victory. “I’m honored, and I’m very shocked and pleased,” she said. Morton has spent most of her life in Mountain View. She has two children and a grandson.

Sentinel-Record in Finch chosen as interim publisher Hot Springs hires for Dumas Clarion new sports editor The Dumas Clarion has named Tracey based Emmerich Newspapers, Inc. The Finch to the position of interim publisher. Finch had previously been the newspaper’s advertising manager. The appointment follows the death of the Clarion’s publisher and managing editor, Terry Hawkins.

The Sentinel-Record of Hot Springs named James Leigh as its sports editor. Leigh, previously a sports reporter, has been at the newspaper since 2012, and has also worked at the Malvern Daily Record and Siftings-Herald in Arkadelphia. “Covering local sports has become a passion for me over the years,” Leigh said in the Sentinel-Record. “While I did not begin my foray into journalism in sports, I was given the opportunity early in my career and quickly fell in love with sports journalism.” Leigh earned a degree in mass media from Henderson State University. Arkansas Publisher Weekly

“This is not what I planned for my life after retirement, and I know I have some pretty big shoes to fill, but I will do my best to carry on where Terry Hawkins left off,” Finch said in the newspaper’s announcement. “And with the help of our staff, we will do what is best for The Dumas Clarion and our community.” The newspaper is owned by Mississippi-

Industry Quote of the Week “I still believe that if your aim is to change the world, journalism is a more immediate short-term weapon.”

company’s president, Wyatt Emmerich, was quoted as saying he was “thrilled to have someone local to take over as publisher to keep that small-town community tradition.” A Forrest City native, Finch has lived in Dumas for more than 39 years. She was formerly a teacher and yearbook sponsor in Dumas before her retirement in 2014. She has two grandchildren.

As interim publisher and managing editor, Finch will oversee daily operations of the newspaper.

Mary Frances Farabough, 88, of Dumas died on Feb. 8. She was a longtime employee of The Dumas Clarion. Farabough worked as a linotype operator and in the newspaper’s front office. She worked for the Clarion for more than 25 years, from the 1940s until 1970. She also is author of a book of local history, Memories of Dumas. She was a member of First United Methodist Church in Dumas. She is survived by a sister-in-law and several nieces and nephews. The family asks that memorials be made to the Desha County Museum, P.O. Box 141, Dumas, Arkansas, 71639.

Hussman named Easterseals Arkansan of the Year Easterseals Arkansas has named Walter Hussman, chairman of WEHCO Media, Inc., as its 2019 Arkansan of the Year. According to a news report in the Arkansas Democrat-Gazette, Hussman will be recognized for his leadership in the business community, philanthropy, support of Easterseals and efforts to improve education in Arkansas. He will be recognized at a banquet in Little Rock on May 9. Hussman is a native of Camden. A graduate of the University of North Carolina and Columbia University, he started working in the family business, Palmer Newspapers, in 1970.

The newspaper group bought the Arkansas Democrat in 1974 and Hussman moved to Little Rock to become publisher of that newspaper. In 1991, after a protracted newspaper war, Hussman bought the assets of the Arkansas

Gazette and the Democrat-Gazette began publishing. In addition to the statewide paper, WEHCO owns daily and weekly newspapers and cable television companies in six states. Easterseals Arkansas is a community resources for people with disabilities. Last year’s honoree was William T. “Bill” Dillard. Hussman was recommended for this year’s award by Sheffield Nelson, chairman of the Easterseals’ Arkansan of the Year event. In a report in the Democrat-Gazette, Nelson is quoted as saying that Hussman is “the ideal person to give this honor to. “He’s certainly done a large number of great things for the state of Arkansas and for Little Rock,” Nelson said. “He’s been a great contributor to many different causes. It’s time that he be honored publicly.

The Washington Post motto, “Democracy Dies In Darkness,” may seem a bit melodramatic, but is an apt description of the disaster unfolding in communities across the U.S. and Arkansas, as newspapers close or shrink. This unfolding tragedy becomes especially noticeable this week (March 10-16) as journalists and open-government advocates mark Sunshine Week. Sunshine Week has been observed annually since 2005 to coincide with the March 16 birthday of James Madison, the father of the U.S. Constitution and a key advocate for the Bill of Rights. Whatever you think about newspapers or the hardworking, underpaid journalists they employ, the decades-long decline of hometown newspapers is creating what researchers call “news deserts” – towns, counties and even larger areas that no longer have regular local coverage of events and issues that affect real people.

relatively short period means fewer eyes observing local government on behalf of busy citizens. On top of closures, the economics of the newspaper business has reduced many more publications to shells of what they once were. Newspapers in Arkansas have cut back on home delivery or reduced the frequency of publication in an effort to stanch the ﬂow of red ink because of the loss of advertising revenue, once their primary source of business income. Some online news outlets, often run by public-spirited former newspaper journalists, try to make up at least part of the loss of a local newspaper. This may not seem significant to those who believe that news is available everywhere, thanks to Facebook, Twitter and other internet platforms or that newspapers can’t be trusted.

More than 1,400 cities in the U.S. have lost their main source of local news over the past 15 years, the Associated Press found in analyzing data compiled by University of North Carolina researchers.

But research shows that losing consistent reporting on local government, sports events or feel-good features on everyday citizens poses a danger to our sense of community.

Many of those towns are in rural and lower-income areas, often with an aging population, according to the AP.

The lack of such journalism also costs taxpayers money, centralizes power among fewer people and can hurt public health.

readers in the dark and emboldens elected officials to sign off on higher wages, larger payrolls and ballooning budget deficits,” the researchers told the AP. A Stanford University researcher found a similar pattern when investigative journalism vanishes at the local level, the AP reported. “When investigative scrutiny declines, stories go untold, which means waste, fraud, and abuse will be less likely to be discovered,” said James Hamilton, director of the Stanford Journalism Program. Penelope Muse Abernathy, a University of North Carolina professor who oversaw the “news desert” report released last fall, told the AP : “Strong newspapers have been good for democracy, and both educators and informers of a citizenry and its governing officials. They have been problem-solvers. “That is what you are missing when you don’t have someone covering you and bringing transparency or sunlight onto government decisions and giving people a say in how those government decisions are made,” Abernathy said. Despite the gloom, Sunshine Week deserves to be celebrated as a reminder that the nation’s founders, especially the author of our Constitution, believed in the power of the press to engage citizens in the act of governing themselves. We should continue to uphold that faith and not allow our democracy to wither in the dark. Sonny Albarado is projects editor at the Arkansas Democrat-Gazette and a member of the Arkansas Freedom of Information Coalition.

Passed the House; did not receive recommendation from Senate City, County and Local Affairs Committee

Changes state procurement law for a variety of purposes, but adds a speciﬁc Freedom of Information Act exemption for requests for information from potential bidders

Signed by the governor as Act 419

Signed by the governor as Act 395

Exempts lottery winners’ identities from the Freedom of Information Act

Failed House, but vote was exponged

Failed in House Education Committee, will be reheard by committee

Increases the threshold amount for municipal sewer commission requirements for bidding from $20,000 to $35000 (companion bill SB516 in Senate is sponsored by Sen. Bond)

Expands the deﬁnition of “public records” in the Freedom of Information Act to include records of a private entity that spends a minimum of 20% of its time, resources and efforts supporting a government function

Exempts from disclosure any investigations or reports related to whether a municipality is a sanctuary city; prohibits sancutary city policies

Expands the deﬁnition of public records in the Freedom of Information Act; protects identity of donors to private foundations