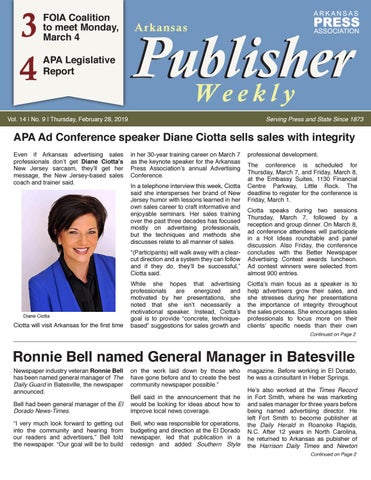 Ciotta will visit Arkansas for the first time

in her 30-year training career on March 7 as the keynote speaker for the Arkansas Press Association’s annual Advertising Conference. In a telephone interview this week, Ciotta said she intersperses her brand of New Jersey humor with lessons learned in her own sales career to craft informative and enjoyable seminars. Her sales training over the past three decades has focused mostly on advertising professionals, but the techniques and methods she discusses relate to all manner of sales.

“(Participants) will walk away with a clearcut direction and a system they can follow and if they do, they’ll be successful,” Ciotta said.

While she hopes that advertising professionals are energized and motivated by her presentations, she noted that she isn’t necessarily a motivational speaker. Instead, Ciotta’s goal is to provide “concrete, techniquebased” suggestions for sales growth and

Ciotta’s main focus as a speaker is to help advertisers grow their sales, and she stresses during her presentations the importance of integrity throughout the sales process. She encourages sales professionals to focus more on their clients’ specific needs than their own Continued on Page 2

on the work laid down by those who have gone before and to create the best community newspaper possible.”

Bell had been general manager of the El Dorado News-Times.

Bell said in the announcement that he would be looking for ideas about how to improve local news coverage.

“I very much look forward to getting out into the community and hearing from our readers and advertisers,” Bell told the newspaper. “Our goal will be to build

Bell, who was responsible for operations, budgeting and direction at the El Dorado newspaper, led that publication in a redesign and added Southern Style

magazine. Before working in El Dorado, he was a consultant in Heber Springs. He’s also worked at the Times Record in Fort Smith, where he was marketing and sales manager for three years before being named advertising director. He left Fort Smith to become publisher at the Daily Herald in Roanoke Rapids, N.C. After 12 years in North Carolina, he returned to Arkansas as pubisher of the Harrison Daily Times and Newton Continued on Page 2

quest for larger commissions. “Talking advertisers into things because of price or because it’s new bells and whistles just doesn’t do anybody any good,” Ciotta said. “Consistency is what sells in our industry, and we need people to be committed. The only way to get that commitment is if we’re selling them based on their needs and not just something we’re getting commission on.” Ciotta sold print advertising for 10 years before moving into training and coaching. She said that experience remains relevant to her audiences and it’s one reason why she focuses her seminars to newspaper advertising professionals.

She did sales training at the shopper’s publication where she worked for two years before starting her own business. “We get pressures from management all the time about ‘sell, sell, sell!’ and ‘deadline, deadline, deadline!’,” so a message of integrity is essential to the industry, Ciotta said. “I think what’s been so impactful and what’s kept me in business for so long besides my own use of integrity is that the message is really needed in our industry.” Though it will be her first time in Arkansas, Ciotta has years of experience in training and coaching for other state newspaper associations, including in Mississippi,

She was preceded in death by her husband, the Rev. J.D. Ellis, and a brother. Survivors include two children; two siblings; two grandchildren; and five great-grandchildren. The family asks that memorials be made to St. Jude Children’s Research Hospital or to the charity of the donor’s choice. Arkansas Publisher Weekly

YOU ROCK. WE ROCK.

who make a difference in the community. Bell is a graduate of the University of Southern Mississippi. Bell and his wife, Greta, have two children and two grandchildren.

Thelma Louise Ellis, 87, died Feb. 13 in Jonesboro. A Piggott native, she was one of the original employees of the Piggott Times in 1967 and remained with the local newspaper until her retirement. As a reporter and photographer, she contributed to hundreds of editions of the newspaper. In 1971, she even climbed into a crop duster to snap aerial photos of the wreckage of a U.S. Air Force cargo plane in Clay County.

County Times. Under Bell, the Harrison newspaper won more than 60 awards and he initiated the “Women of Distinction” program in Harrison to recognize women

Industry Quote of the Week “Whoever would overthrow the liberty of a nation must begin by subduing the freedom of speech.”

“Ronnie brings with him a wealth of knowledge of the newspaper business as well as what it takes to publish a successful newspaper in a thriving community,” David Mosesso, regional president of Paxton Media Group, said in the newspaper. “His Arkansas roots run deep and Batesville is a perfect match for his skill set. There are some great things in store for The Daily Guard as we enter this next phase, and I couldn’t be more pleased with who will be leading the charge.”

FOIA Coalition to meet Monday, March 4 The Arkansas Freedom of Information Act Coalition will meet Monday, March 4, to consider five bills currently being considered by the Legislature that will impact the state’s Freedom of Information Act. The meeting starts at noon at the Arkansas Press Association headquarters, 411 S. Victory St., in Little Rock. A boxed lunch will be provided, but registration is required by Friday, March 1, to Ashley Wimberley at ashley@arkansaspress. org.

Terry Hawkins, publisher of the Dumas Clarion and an Arkansas journalist since 1974, died Feb. 24 in Dumas. He was 66. Hawkins worked for the Clarion from 1974 to 1981 and 1982-1986 before returning to the newspaper in 1992 as assistant to publisher Charlotte Schexnayder. He remained on the newspaper’s staff for 26 more years, eventually becoming publisher. He also worked for the Nashville News and Blytheville Courier-News, as managing editor of both newspapers. Hawkins was a Monticello native and graduate of Castle Heights Military Academy in Lebanon, Tenn. He earned a degree from the University of Arkansas at Monticello. The award-winning journalist earned the Arkansas Press Women contest sweepstakes and the National Press Women Communications Contest sweepstakes award in 2007. He also won numerous Arkansas Press Association awards. He had served as secretary/ treasurer for Arkansas Press Women. Active in the Dumas community, Hawkins served the Dumas First United Methodist Church, where he was on the administrative council, the Dumas Area Arts Council, Dumas Chamber of Commerce, Dumas County Museum and Main Street Dumas. In 1997, he was crowned Ding Dong Daddy of Dumas and was an ambassador for the southeast Arkansas city. He is survived by a sister, a brother and a niece. A memorial service was held Feb. 27. Lasting memorials may be given to Dumas First United Methodist Church, 230 Court St., Dumas AR 71639 or Delta Memorial Hospital Renovation Project, PO Box 519, Dumas AR 71639. Arkansas Publisher Weekly

The group will review at least five bills at the meeting that would constrain the state’s venerable open records and open meetings law. Those bills are: •SB 306 by Sen. Larry Teague. This bill would allow for winners of Powerball and MegaMillions jackpots in Arkansas to keep their names and identifying information exempt from public disclosure under FOIA. *HB 1440 by Rep. Mary Bentley. This bill would establish the Maternal and Perinatal Outcomes Quality Review Committee and exempt from FOIA

Editor and Publisher recognizes Hot Springs Village Voice Newspaper industry magazine Editor and Publisher has named the Hot Springs Village Voice as a 2019 honorable mention on its list of “10 Newspapers that Do it Right.” The list is published in the magazine’s March edition. According to the magazine, the newspapers are recognized for “innovative revenue strategies, impactful journalism and creative audience growth.” The magazine continued, “Our 10 newspapers, along with the ones listed in our honorable mentions, show that journalism continues to thrive, thanks to bright ideas and bright people. We hope they inspire others to keep up the great work.” The newspaper was cited for an honorable mention in E&P’s “10 who …” for its focus in 2018 on the 55th anniversary of the assassination of President John F. Kennedy. The newspaper’s JFK coverage, led by Managing Editor Jeff Meek, culminated in November with a 3

special-edition magazine that sold about 5,500 copies. The magazine included “exclusive photos, new interviews and local remembrances.” Meek has exhaustively researched the assassination of President Kennedy since the 1970s. Meek’s efforts were featured in the Dec. 13, 2018, edition of Arkansas Publisher Weekly https:// bit.ly/2UckF4X He said there has never been more reader response and interest than during the Voice’s coverage of the JFK assassination. In addition to the magazine, the newspaper created a documentary-style feature based on an interview with Secret Service Agent Mike Howard – and placed it exclusively on the Voice’s website. Congratulations to the Village Voice, Meek, General Manager Jennifer Allen and the entire team in Hot Springs Village for their excellent work and commitment to good, innovative journalism. February 28, 2019

Awaits initial hearing in House Education Committee (Rep. Gazaway has indicated he is re-filing the bill and withdrawing the executive session provision)

Changes state procurement law for a variety of purposes, but adds a specific Freedom of Information Act exemption for requests for information from potential bidders

Provides for rules that effect multiple state agencies to be grouped together for the purposes of providing notice, holding hearings, and advancing rules legislatively

Exempts lottery winners’ identities from the Freedom of Information Act

Amends the law concerning emergency temporary locations for meetings of a governing body; and to declare an emergency

Expands the definition of â&#x20AC;&#x153;public recordsâ&#x20AC;? in the Freedom of Information Act to include records of a private entity that spends a minimum of 20% of its time, resources and efforts supporting a government function

Exempts from FOIA any records of administrative investigations related to the municpal sanctuary policies the bill would ban, if approved

YOU ROCK. WE ROCK.

Bring your best advertising ideas (and samples) to share with the group! Prize money will be awarded.

Public notices and other timely issues

GUEST SPEAKER Diane Ciotta | Training Classics/The Keynote Effect Diane has effectively motivated advertising sales professionals around the country to focus on their prospects’ needs vs. their own, through dynamic skills enhancement seminars. Her speciality in the publishing industry is based on personal experience and is portrayed with an incomparable ability to relate to her participants, which results in immeasurable return on investment. Diane concentrates on increasing confidence and uses Jersey sarcasm combined with Italian passion to emphasize proven successful concepts and techniques for driving incremental revenue while improving client retention. She understands all aspects of the business and has published a children’s educational newspaper in her hometown as well as authoring her book focused on common sense based success in sales entitled Shut-Up & Sell! Diane was born, raised and still happily resides in central Jersey. Arkansas Publisher Weekly