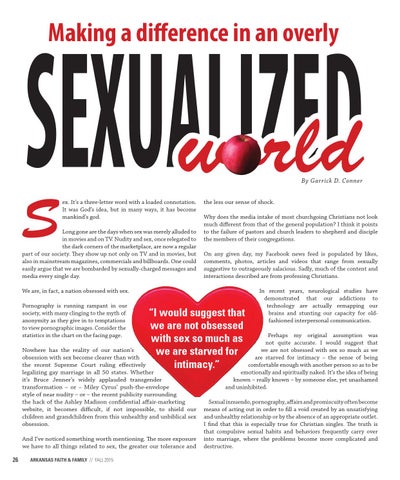 SEXUALIZED world Making a difference in an overly

ex. It’s a three-letter word with a loaded connotation. It was God’s idea, but in many ways, it has become mankind’s god.

Long gone are the days when sex was merely alluded to in movies and on TV. Nudity and sex, once relegated to the dark corners of the marketplace, are now a regular part of our society. They show up not only on TV and in movies, but also in mainstream magazines, commercials and billboards. One could easily argue that we are bombarded by sexually-charged messages and media every single day. We are, in fact, a nation obsessed with sex. Pornography is running rampant in our society, with many clinging to the myth of anonymity as they give in to temptations to view pornographic images. Consider the statistics in the chart on the facing page.

the less our sense of shock.

Why does the media intake of most churchgoing Christians not look much different from that of the general population? I think it points to the failure of pastors and church leaders to shepherd and disciple the members of their congregations. On any given day, my Facebook news feed is populated by likes, comments, photos, articles and videos that range from sexually suggestive to outrageously salacious. Sadly, much of the content and interactions described are from professing Christians. In recent years, neurological studies have demonstrated that our addictions to technology are actually remapping our brains and stunting our capacity for oldfashioned interpersonal communication.

“I would suggest that we are not obsessed Perhaps my original assumption was with sex so much as not quite accurate. I would suggest that we are not obsessed with sex so much as we Nowhere has the reality of our nation’s we are starved for are starved for intimacy – the sense of being obsession with sex become clearer than with comfortable enough with another person so as to be the recent Supreme Court ruling effectively intimacy.” legalizing gay marriage in all 50 states. Whether it’s Bruce Jenner’s widely applauded transgender transformation – or – Miley Cyrus’ push-the-envelope style of near nudity – or – the recent publicity surrounding the hack of the Ashley Madison confidential affair-marketing website, it becomes difficult, if not impossible, to shield our children and grandchildren from this unhealthy and unbiblical sex obsession. And I’ve noticed something worth mentioning. The more exposure we have to all things related to sex, the greater our tolerance and 26

emotionally and spiritually naked. It’s the idea of being known – really known – by someone else, yet unashamed and uninhibited.

Sexual innuendo, pornography, affairs and promiscuity often become means of acting out in order to fill a void created by an unsatisfying and unhealthy relationship or by the absence of an appropriate outlet. I find that this is especially true for Christian singles. The truth is that compulsive sexual habits and behaviors frequently carry over into marriage, where the problems become more complicated and destructive. 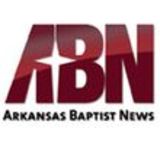