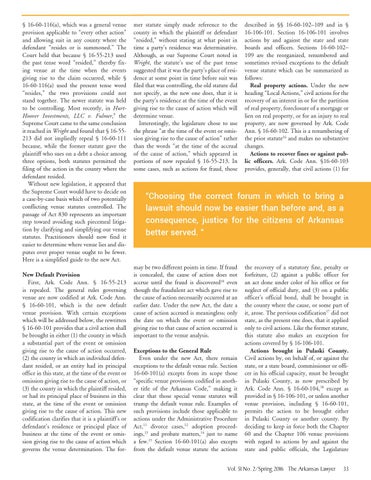 mer statute simply made reference to the county in which the plaintiff or defendant “resided,” without stating at what point in time a party’s residence was determinative. Although, as our Supreme Court noted in Wright, the statute’s use of the past tense suggested that it was the party’s place of residence at some point in time before suit was filed that was controlling, the old statute did not specify, as the new one does, that it is the party’s residence at the time of the event giving rise to the cause of action which will determine venue. Interestingly, the legislature chose to use the phrase “at the time of the event or omission giving rise to the cause of action” rather than the words “at the time of the accrual of the cause of action,” which appeared in portions of now repealed § 16-55-213. In some cases, such as actions for fraud, those

described in §§ 16-60-102–109 and in § 16-106-101. Section 16-106-101 involves actions by and against the state and state boards and officers. Sections 16-60-102– 109 are the reorganized, renumbered and sometimes revised exceptions to the default venue statute which can be summarized as follows: Real property actions. Under the new heading “Local Actions,” civil actions for the recovery of an interest in or for the partition of real property, foreclosure of a mortgage or lien on real property, or for an injury to real property, are now governed by Ark. Code Ann. § 16-60-102. This is a renumbering of the prior statute16 and makes no substantive changes. Actions to recover fines or against public officers. Ark. Code Ann. §16-60-103 provides, generally, that civil actions (1) for

“Choosing the correct forum in which to bring a lawsuit should now be easier than before and, as a consequence, justice for the citizens of Arkansas better served. “

may be two different points in time. If fraud is concealed, the cause of action does not accrue until the fraud is discovered10 even though the fraudulent act which gave rise to the cause of action necessarily occurred at an earlier date. Under the new Act, the date a cause of action accrued is meaningless; only the date on which the event or omission giving rise to that cause of action occurred is important to the venue analysis. Exceptions to the General Rule Even under the new Act, there remain exceptions to the default venue rule. Section 16-60-101(a) excepts from its scope those “specific venue provisions codified in another title of the Arkansas Code,” making it clear that those special venue statutes will trump the default venue rule. Examples of such provisions include those applicable to actions under the Administrative Procedure Act,11 divorce cases,12 adoption proceedings,13 and probate matters,14 just to name a few.15 Section 16-60-101(a) also excepts from the default venue statute the actions

the recovery of a statutory fine, penalty or forfeiture, (2) against a public officer for an act done under color of his office or for neglect of official duty, and (3) on a public officer’s official bond, shall be brought in the county where the cause, or some part of it, arose. The previous codification17 did not state, as the present one does, that it applied only to civil actions. Like the former statute, this statute also makes an exception for actions covered by § 16-106-101. Actions brought in Pulaski County. Civil actions by, on behalf of, or against the state, or a state board, commissioner or officer in his official capacity, must be brought in Pulaski County, as now prescribed by Ark. Code Ann. § 16-60-104,18 except as provided in § 16-106-101, or unless another venue provision, including § 16-60-101, permits the action to be brought either in Pulaski County or another county. By deciding to keep in force both the Chapter 60 and the Chapter 106 venue provisions with regard to actions by and against the state and public officials, the Legislature