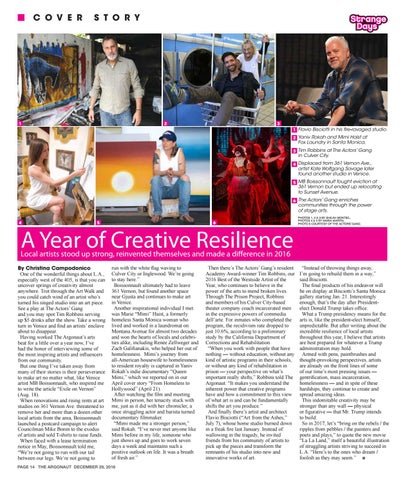 3 1 Flavio Bisciotti in his fire-ravaged studio. 2 Yaniv Rokah and Mimi Haist at

3 Tim Robbins at The Actors’ Gang

361 Vernon but ended up relocating to Sunset Avenue.

communities through the power of stage arts.

A Year of Creative Resilience

Local artists stood up strong, reinvented themselves and made a difference in 2016 By Christina Campodonico One of the wonderful things about L.A., especially west of the 405, is that you can uncover springs of creativity almost anywhere. Trot through the Art Walk and you could catch wind of an artist who’s turned his singed studio into an art piece. See a play at The Actors’ Gang and you may spot Tim Robbins serving up $5 drinks after the show. Take a wrong turn in Venice and find an artists’ enclave about to disappear. Having worked The Argonaut’s arts beat for a little over a year now, I’ve had the honor of interviewing some of the most inspiring artists and influencers from our community. But one thing I’ve taken away from many of their stories is their perseverance to make art no matter what, like Venice artist MB Boissonnault, who inspired me to write the article “Exile on Vernon” (Aug. 18). When renovations and rising rents at art studios on 361 Vernon Ave. threatened to remove her and more than a dozen other local artists from the area, Boissonnault launched a postcard campaign to alert Councilman Mike Bonin to the exodus of artists and sold T-shirts to raise funds. When faced with a lease termination notice in May, Boissonnault told me, “We’re not going to run with our tail between our legs. We’re not going to

run with the white flag waving to Culver City or Inglewood. We’re going to stay here.” Boissonnault ultimately had to leave 361 Vernon, but found another space near Gjusta and continues to make art in Venice. Another inspirational individual I met was Marie “Mimi” Haist, a formerly homeless Santa Monica woman who lived and worked in a laundromat on Montana Avenue for almost two decades and won the hearts of locals and celebrities alike, including Renée Zellweger and Zach Galifianakis, who helped her out of homelessness. Mimi’s journey from all-American housewife to homelessness to resident royalty is captured in Yaniv Rokah’s indie documentary “Queen Mimi,” which we reported on in our April cover story “From Homeless to Hollywood” (April 21). After watching the film and meeting Mimi in person, her tenacity stuck with me, just as it did with her chronicler, a once struggling actor and barista turned documentary filmmaker. “Mimi made me a stronger person,” said Rokah. “I’ve never met anyone like Mimi before in my life, someone who just shows up and goes to work seven days a week and maintains such a positive outlook on life. It was a breath of fresh air.”

Then there’s The Actors’ Gang’s resident Academy Award-winner Tim Robbins, our 2016 Best of the Westside Artist of the Year, who continues to believe in the power of the arts to mend broken lives. Through The Prison Project, Robbins and members of his Culver City-based theater company coach incarcerated men in the expressive powers of commedia dell’arte. For inmates who completed the program, the recidivism rate dropped to just 10.6%, according to a preliminary study by the California Department of Corrections and Rehabilitation. “When you work with people that have nothing — without education, without any kind of artistic programs in their schools, or without any kind of rehabilitation in prison — your perspective on what’s important really shifts,” Robbins told The Argonaut. “It makes you understand the inherent power that creative programs have and how a commitment to this view of what art is and can be fundamentally shifts the art you produce.” And finally there’s artist and architect Flavio Bisciotti (“Art from the Ashes,” July 7), whose home studio burned down in a freak fire last January. Instead of wallowing in the tragedy, he invited friends from his community of artists to pick up the pieces and transform the remnants of his studio into new and innovative works of art.

“Instead of throwing things away, I’m going to rebuild them in a way,” said Bisciotti. The final products of his endeavor will be on display at Bisciotti’s Santa Monica gallery starting Jan. 21. Interestingly enough, that’s the day after Presidentelect Donald Trump takes office. What a Trump presidency means for the arts is, like the president-elect himself, unpredictable. But after writing about the incredible resilience of local artists throughout this year, I believe that artists are best prepared for whatever a Trump administration may hold. Armed with pens, paintbrushes and thought-provoking perspectives, artists are already on the front lines of some of our time’s most pressing issues — gentrification, mass incarceration, homelessness — and in spite of these hardships, they continue to create and spread amazing ideas. This indomitable creativity may be stronger than any wall — physical or figurative — that Mr. Trump intends to build. So in 2017, let’s “bring on the rebels / the ripples from pebbles / the painters and poets and plays,” to quote the new movie “La La Land,” itself a beautiful illustration of struggling artists striving to succeed in L.A. “Here’s to the ones who dream / foolish as they may seem.”