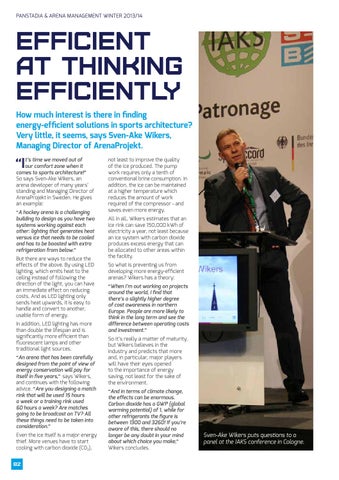 Efficient at thinking efficiently How much interest is there in finding energy-efficient solutions in sports architecture? Very little, it seems, says Sven-Ake Wikers, Managing Director of ArenaProjekt.

t’s time we moved out of our comfort zone when it comes to sports architecture!” So says Sven-Ake Wikers, an arena developer of many years’ standing and Managing Director of ArenaProjekt in Sweden. He gives an example: “A hockey arena is a challenging building to design as you have two systems working against each other: lighting that generates heat versus ice that needs to be cooled and has to be boosted with extra refrigeration from below.” But there are ways to reduce the effects of the above. By using LED lighting, which emits heat to the ceiling instead of following the direction of the light, you can have an immediate effect on reducing costs. And as LED lighting only sends heat upwards, it is easy to handle and convert to another, usable form of energy. In addition, LED lighting has more than double the lifespan and is significantly more efficient than fluorescent lamps and other traditional light sources. “An arena that has been carefully designed from the point of view of energy conservation will pay for itself in five years,” says Wikers, and continues with the following advice. “Are you designing a match rink that will be used 15 hours a week or a training rink used 60 hours a week? Are matches going to be broadcast on TV? All these things need to be taken into consideration.” Even the ice itself is a major energy thief. More venues have to start cooling with carbon dioxide (CO2),

not least to improve the quality of the ice produced. The pump work requires only a tenth of conventional brine consumption. In addition, the ice can be maintained at a higher temperature which reduces the amount of work required of the compressor - and saves even more energy. All in all, Wikers estimates that an ice rink can save 150,000 kWh of electricity a year, not least because an ice system with carbon dioxide produces excess energy that can be allocated to other areas within the facility. So what is preventing us from developing more energy-efficient arenas? Wikers has a theory: “When I’m out working on projects around the world, I find that there’s a slightly higher degree of cost awareness in northern Europe. People are more likely to think in the long term and see the difference between operating costs and investment.” So it’s really a matter of maturity, but Wikers believes in the industry and predicts that more and, in particular, major players will have their eyes opened to the importance of energy saving, not least for the sake of the environment. “And in terms of climate change, the effects can be enormous. Carbon dioxide has a GWP (global warming potential) of 1, while for other refrigerants the figure is between 1300 and 3260! If you’re aware of this, there should no longer be any doubt in your mind about which choice you make,” Wikers concludes.

Sven-Ake Wikers puts questions to a panel at the IAKS conference in Cologne.

Sven-Ake Wikersâ&#x20AC;&#x2122; tips: Do a Life Cycle Cost Calculation (LCC): spread over the life of the building, the initial additional investment is insignificant.

Use copper pipes combined with carbon dioxide for the ice rink: they are easy to use, have an unparalleled service life and lower operating costs. Think about the world situation: energy prices are almost certain to rise. 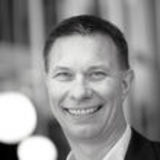