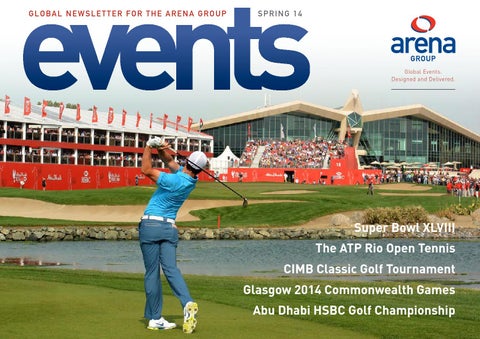 GLOBAL NEWSLETTER FOR THE ARENA GROUP

A WORD FROM OUR CEO, GREG LAWLESS

The launch of our Arena Group global newsletter reflects the company’s dynamic growth and highlights the role we play at the heart of many of the world’s landmark events. The last two years have seen us grow exponentially; from a UK-based event rental company to an unequivocally global business with 19 offices across four continents. We have welcomed to the group two leading event companies; Karl’s Event Services in the USA (now Arena Americas) and Asia Tents International in Malaysia, (now Asia Tents Arena). In response to further demand in the Middle East we opened our first Saudi Arabia office, Arena Tents Saudi Arabia.

We now have three divisions:

These acquisitions represent a significant progression in our capability, which is

• Arena Americas: which has five offices across the USA

showing no sign of slowing down. We are involved in many of the events taken

the group, such as this year’s Ryder Cup. A recent industry report shows that 2014 is going to be the biggest year ever for global sporting events – with total worldwide revenue of $146.47bn – and it’s into consideration for the survey, including the Winter Olympics and the FIFA World Cup. There is also of course our sponsorship of the Glasgow 2014 Commonwealth Games, which we are incredibly proud to be involved with. But whatever growth lies ahead, one thing will remain the same; our ethos. We remain focused on providing every client, no matter what the size or genre of event, with the highest quality temporary event environments suited to their culture, budget and brand. And it’s our talented and loyal employees that enable

this; they are trusted professionals who know their individual territories and specialities inside out. What this expansion has offered us is the ability to share knowledge and resources across all offices, which is particularly pertinent for those events that tour globally who can now achieve the same look, feel and standard anywhere in the world with the Arena Group. With spectators, brands and sponsors constantly expecting events to be bigger, better and more polished this is becoming ever more important. We are proud to be at the forefront of making this vision a reality.

The group was praised for its sustainable approach to stadium redevelopment, with the London 2012 Olympic Beach Volleyball stadium cited as a benchmark for the future.

The list featured some of the biggest names in the global sport industry spanning everything from suppliers to sponsors, including Disney, Twitter, IMG, GlaxoSmithKline, Coca Cola and AEG.

Arena Americas “Since Arena Group acquired Arena Americas (previously Karl’s Event Services) in 2013, we’ve gone on to break world records, supply structures in sub zero temperatures, and use bespoke engineering to create a true jewel in the heart of New York City. It’s been a great year for every one of our five offices across the states.” J ohn H a en er , C EO , A r en a A mer i c a s.

SUPER BOWL XLVIII As the media frenzy began ahead of Super Bowl XLVIII, Arena Americas supported the NFL by creating additional venues for the thousands of fans ready to descend upon MetLife Stadium in New Jersey and Super Bowl Blvd in Times Square. At the stadium, where the Seattle Seahawks took on the Denver Broncos, the Arena Americas team installed tents across the NFL tailgate and fan zone areas, as well as two branded 20m single-slope structures, which became the main stadium entry areas. Meanwhile, 560 m2 of tents lined Times Square creating additional fan facilities for the festivities in the run up to the big game.

Tiffany &amp; Co The iconic Tiffany &amp; Co. Blue Box brand was brought to life by Arena Americas as it helped the company launch its new jewellery line in association with Baz Luhrmann’s The Great Gatsby. New York’s Rockefeller Center became home to a giant replica of the instantly-recognizable gift box, which covered the entire 15,000 sq ft famous ice rink. Great attention to detail was required to install the custom-built 39m by 31m structure, which included a custom 12° pitch The structure was wrapped with a specially-ordered trademark Tiffany blue fabric façade, with the entrance enhanced by an oversize Tiffany &amp; Co. white bow, giving a true touch of elegance.

into the iconic location.

CIMB CLASSIC The CIMB Classic gained official status on the PGA Tour in Southeast Asia for the first time, bringing greater significance to the tournament, and attracting leading players to the Kuala Lumpur Golf and Country Club.

SAUDI ARAMCO ITHRA KNOWLEDGE PROGRAM Arena Middle East &amp; Asia managed the entire temporary overlay at the Saudi Aramco Ithra Knowledge Program, a cultural celebration welcoming half a million visitors to the region of Dhahran. The project was Arena Group’s largest and most complex project in 2013; with 11,000m2 of structures to house exhibits such as interactive shows exploring Islamic and Arab heritage. This included the construction of the only theatre on the east coast of Saudi Arabia; a stunning 40m dome structure with a seating capacity of over 1,000 using Arena Group’s clearview™ seating.

Arena Overlay “Arena Group’s specialist overlay team was established ahead of the London 2012 Olympics and since the games we’ve been busy working everywhere from the FIFA World Cup in Brazil to the Sochi 2014 Winter Olympics. Our project management skills and patented products – including our demountable clearview™ grandstand system – has attracted international interest.” Joe O’Neill, international business development director, Arena Group.

Over 5,000 of Arena Group’s clearview™ seats were installed into Salvador’s Arena Fonte Nova stadium in Brazil ahead of 2013’s Confederations Cup. These will be back in place ready for this year’s eagerlyawaited FIFA World Cup.

The demountable seating and sub-structure, installed and managed by Arena Group’s Brazilian partner FAST Engenharia, brings the stadium capacity to 61,500. The seats were removed and used at Brazil F1 and Rio Open ATP Tennis, showcasing the true flexibility and sustainability of temporary infrastructure.

Arena Group at the London 2012 Olympics.

possible, as it was used to construct the 6,300 seat temporary stadium at the Jockey Club Brasileiro. A joint venture between IMG and EBX Group, The Rio Open Tennis by Claro hdtv is the only combined ATP World Tour 500 and WTA International event in South America. Completed in collaboration with Arena Group’s Brazilian partner FAST, the stadium was reminiscent of the 15,000 seat demountable stadium designed and installed by

FORMULA 1 INTERLAGOS SAO PAULO Over 5,000 clearview™ seats were installed for the Brazilian Grand Prix, forming part of 45,000 seats which lined the 4,400m track at the Interlagos race course in Sao Paulo. Used specifically for VIPs, the system, which stood at 24 rows high, was installed with partner FAST. The project continues Arena Group’s longstanding relationship with Formula One, where it provides overlay and turnkey event services across the UK, Europe and Middle East.

SOCHI 2014 WINTER OLYMPICS Contracted directly by the Sochi Organising Committee and working alongside local partners, Arena Group designed and installed over 130 camera platforms and cable bridges across the Mountain and Coastal Clusters . This included one at the top of the vertigo-inducing 213m ski jump drop.

The Corinthians Stadium will feature the largest ever temporary structures to be built in Brazil; two 9,000+ seat demountable grandstands situated in the North and South stands. Built by FAST Engenharia using Arena Group’s clearview™ seating system and supporting steel work, the huge two-storey buildings will incorporate food and beverage outlets, toilets and officials and media rooms, with full working electrics and water. Each structure will stand at 102m wide and 30m height, with 54 rows of seats.

Arena Group scaled the dizzying heights of the Sochi 2014 Olympic mountain cluster, installing bespoke scaffolding structures to allow the global media to capture the winter sports in all their glory.

Arena UK &amp; Europe “Arena UK &amp; Europe’s continued focus is on providing a full service offer to our clients. We have experienced an increase in customers who are realising the benefits of engaging Arena across all aspects of their events; from grandstand seating, temporary structures, design services, scaffolding, furniture and tableware. 2014 is set to be our busiest yet, delivering our calendar of regular projects along with Ryder Cup and Commonwealth Games.” Grahame Muir, CEO, Arena UK &amp; Europe

Arena Group is an official sponsor of the Glasgow 2014 Commonwealth Games this summer, as an Official Overlay and Temporary Structures Provider and Exclusive Provider of Temporary Seating.

As part of a newly awarded five year contract with the LTA, Arena UK &amp; Europe was back

The team will install over 230 structures; totalling more than 20,800m2. They’re also tasked with delivering every single temporary seat at the Games, around 22,000 in total across 10 venues, along with camera platforms, wheelchair access platforms, press positions and commentator platforms. This includes exhibition services across all venues.

at The Queen’s Club for the 34th year transforming the venue ahead of the AEGON Tennis Championships. Over 8,800 seats were carefully built over the existing permanent infrastructure complete with an additional 12,500m2 of temporary structures, and over 100 tonnes of substructure were installed across the entire venue.

Ryder Cup 2014 Following the successful delivery of the 2010 Ryder Cup overlay, the PGA awarded a brand new contract to Arena UK &amp; Europe to supply the 2014 competition at Gleneagles, which will see every division working across the prestigious site. Triple and double deck hospitality structures will overlook the 18th and 12th greens, with full interior fit out, furniture and tableware. A state-of-the-art media centre, grandstand seating and on-course event structures including media platforms and scoreboards are also being designed and installed.

Arena UK &amp; Europe was back at the Barclays ATP World Tour Finals for the fifth year, providing over 9,000sqft of temporary overlay across London’s iconic O2 Arena, including a brand new triple decker hospitality structure for the sponsors’ hospitality village. In line with the organiser’s ambitions to create a warmer practice environment for players and a more exclusive viewing environment for sponsors, Arena Group worked closely with the production and sponsor hospitality teams to design and install the bespoke 15m x 35m triple deck hospitality structure overlooking the players’ practice court.

year will deliver over 24

19 global offices and a network of local partners 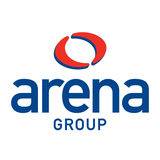