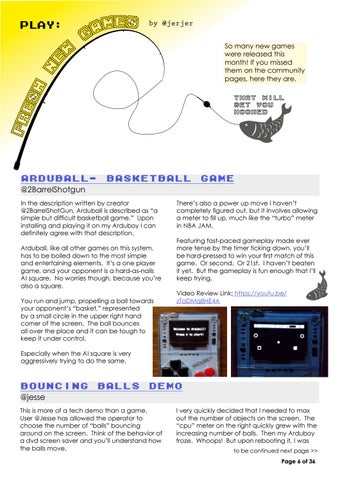 by @jerjer So many new games were released this month! If you missed them on the community pages, here they are.

That will get you hooked

In the description written by creator @2BarrelShotGun, Arduball is described as “a simple but difficult basketball game.” Upon installing and playing it on my Arduboy I can definitely agree with that description. Arduball, like all other games on this system, has to be boiled down to the most simple and entertaining elements. It’s a one player game, and your opponent is a hard-as-nails AI square. No worries though, because you’re also a square. You run and jump, propelling a ball towards your opponent’s “basket,” represented by a small circle in the upper right hand corner of the screen. The ball bounces all over the place and it can be tough to keep it under control.

There’s also a power up move I haven’t completely figured out, but it involves allowing a meter to fill up, much like the “turbo” meter in NBA JAM. Featuring fast-paced gameplay made ever more tense by the timer ticking down, you’ll be hard-pressed to win your first match of this game. Or second. Or 21st. I haven’t beaten it yet. But the gameplay is fun enough that I’ll keep trying. Video Review Link: https://youtu.be/ zTaDMq8HE4A

Especially when the AI square is very aggressively trying to do the same.

This is more of a tech demo than a game. User @Jesse has allowed the operator to choose the number of “balls” bouncing around on the screen. Think of the behavior of a dvd screen saver and you’ll understand how the balls move.

I very quickly decided that I needed to max out the number of objects on the screen. The “cpu” meter on the right quickly grew with the increasing number of balls. Then my Arduboy froze. Whoops! But upon rebooting it, I was to be continued next page &gt;&gt; Page 6 of 36

Mr_Y is hosting our pixel page, Luxregina has contributed a tutorial for pixel art and uXe talks about Arduboy on an NES cartridge 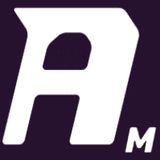