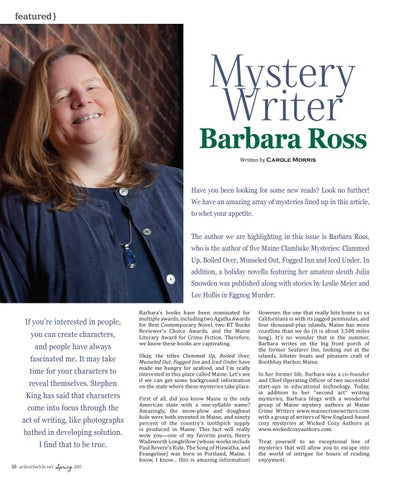 Have you been looking for some new reads? Look no further! We have an amazing array of mysteries lined up in this article, to whet your appetite. The author we are highlighting in this issue is Barbara Ross, who is the author of five Maine Clambake Mysteries: Clammed Up, Boiled Over, Musseled Out, Fogged Inn and Iced Under. In addition, a holiday novella featuring her amateur sleuth Julia Snowden was published along with stories by Leslie Meier and Lee Hollis in Eggnog Murder.

If you’re interested in people, you can create characters, and people have always fascinated me. It may take time for your characters to reveal themselves. Stephen King has said that characters come into focus through the act of writing, like photographs bathed in developing solution. I find that to be true. 30. ardentforlife.net - Spring 2017

Barbara’s books have been nominated for multiple awards, including two Agatha Awards for Best Contemporary Novel, two RT Books Reviewer’s Choice Awards, and the Maine Literary Award for Crime Fiction. Therefore, we know these books are captivating. Okay, the titles Clammed Up, Boiled Over, Musseled Out, Fogged Inn and Iced Under have made me hungry for seafood, and I’m really interested in this place called Maine. Let’s see if we can get some background information on the state where these mysteries take place. First of all, did you know Maine is the only American state with a one-syllable name? Amazingly, the snow-plow and doughnut hole were both invented in Maine, and ninety percent of the country’s toothpick supply is produced in Maine. This fact will really wow you—one of my favorite poets, Henry Wadsworth Longfellow (whose works include Paul Revere&#39;s Ride, The Song of Hiawatha, and Evangeline) was born in Portland, Maine. I know, I know… this is amazing information!

However, the one that really hits home to us Californians is with its jagged peninsulas, and four thousand-plus islands, Maine has more coastline than we do (it is about 3,500 miles long). It’s no wonder that in the summer, Barbara writes on the big front porch of the former Seafarer Inn, looking out at the islands, lobster boats and pleasure craft of Boothbay Harbor, Maine.

In her former life, Barbara was a co-founder and Chief Operating Officer of two successful start-ups in educational technology. Today, in addition to her “second act” writing mysteries, Barbara blogs with a wonderful group of Maine mystery authors at Maine Crime Writers www.mainecrimewriters.com with a group of writers of New England-based cozy mysteries at Wicked Cozy Authors at www.wickedcozyauthors.com.

Treat yourself to an exceptional line of mysteries that will allow you to escape into the world of intrigue for hours of reading enjoyment. 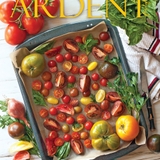 More from Ardent For Life