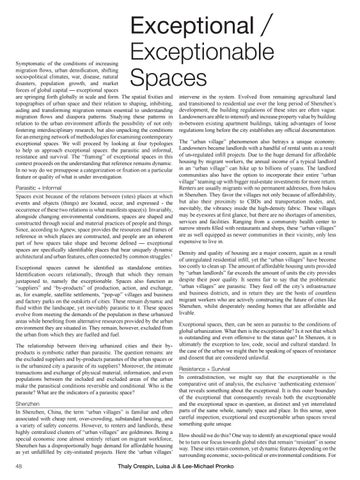 Symptomatic of the conditions of increasing migration flows, urban densification, shifting socio-political climates, war, disease, natural disasters, population growth, and market forces of global capital — exceptional spaces are springing forth globally in scale and form. The spatial fixities and topographies of urban space and their relation to shaping, inhibiting, aiding and transforming migration remain essential to understanding migration flows and diaspora patterns. Studying these patterns in relation to the urban environment affords the possibility of not only fostering interdisciplinary research, but also unpacking the conditions for an emerging network of methodologies for examining contemporary exceptional spaces. We will proceed by looking at four typologies to help us approach exceptional spaces: the parasitic and informal, resistance and survival. The “framing” of exceptional spaces in this context proceeds on the understanding that reference remains dynamic. In no way do we presuppose a categorization or fixation on a particular feature or quality of what is under investigation. Parasitic + Informal   Spaces exist because of the relations between (sites) places at which events and objects (things) are located, occur, and expressed - the occurrence of these two relations is what manifests space(s). Invariably, alongside changing environmental conditions, spaces are shaped and constructed through social and material practices of people and things. Since, according to Agnew, space provides the resources and frames of reference in which places are constructed, and people are an inherent part of how spaces take shape and become defined — exceptional spaces are specifically identifiable places that bear uniquely dynamic architectural and urban features, often connected by common struggles.1

Exceptional spaces cannot be identified as standalone entities. Identification occurs relationally, through that which they remain juxtaposed to, namely the exceptionable. Spaces also function as “suppliers” and “by-products” of production, action, and exchange, as, for example, satellite settlements, “pop-up” villages and business and factory parks on the outskirts of cities. These remain dynamic and fluid within the landscape, yet inevitably parasitic to it. These spaces evolve from meeting the demands of the population in these urbanized areas while benefiting from alternative resources provided by the urban environment they are situated in. They remain, however, excluded from the urban from which they are fuelled and fuel. The relationship between thriving urbanized cities and their byproducts is symbiotic rather than parasitic. The question remains: are the excluded suppliers and by-products parasites of the urban spaces or is the urbanized city a parasite of its suppliers? Moreover, the intimate transactions and exchange of physical material, information, and even populations between the included and excluded areas of the urban make the parasitical conditions reversible and conditional. Who is the parasite? What are the indicators of a parasitic space? Shenzhen In Shenzhen, China, the term “urban villages” is familiar and often associated with cheap rent, over-crowding, substandard housing, and a variety of safety concerns. However, to renters and landlords, these highly centralized clusters of “urban villages” are goldmines. Being a special economic zone almost entirely reliant on migrant workforce, Shenzhen has a disproportionally huge demand for affordable housing as yet unfulfilled by city-initiated projects. Here the ‘urban villages’ 48

intervene in the system. Evolved from remaining agricultural land and transitioned to residential use over the long period of Shenzhen’s development, the building regulations of these sites are often vague. Landowners are able to intensify and increase property value by building in-between existing apartment buildings, taking advantages of loose regulations long before the city establishes any official documentation. The “urban village” phenomenon also betrays a unique economy. Landowners became landlords with a handful of rental units as a result of un-regulated infill projects. Due to the huge demand for affordable housing by migrant workers, the annual income of a typical landlord in an “urban village” can hike up to billions of yuans. The landlord communities also have the option to incorporate their entire “urban village” teaming up with bigger real-estate investments for more return. Renters are usually migrants with no permanent addresses, from hukou in Shenzhen. They favor the villages not only because of affordability, but also their proximity to CBDs and transportation nodes, and, inevitably, the vibrancy inside the high-density fabric. These villages may be eyesores at first glance, but there are no shortages of amenities, services and facilities. Ranging from a community health center to narrow streets filled with restaurants and shops, these “urban villages” are as well equipped as newer communities in their vicinity, only less expensive to live in. Density and quality of housing are a major concern, again as a result of unregulated residential infill, yet the “urban villages” have become too costly to clean up. The amount of affordable housing units provided by “urban landlords” far exceeds the amount of units the city provides despite their poor quality. It seems fair to say that the problematic “urban villages” are parasitic. They feed off the city’s infrastructure and business districts, and in return they are the hosts of countless migrant workers who are actively constructing the future of cities like Shenzhen, whilst desperately needing homes that are affordable and livable. Exceptional spaces, then, can be seen as parasitic to the conditions of global urbanization. What then is the exceptionable? Is it not that which is outstanding and even offensive to the status quo? In Shenzen, it is ultimately the exception to law, code, social and cultural standard. In the case of the urban we might then be speaking of spaces of resistance and dissent that are considered unlawful. Resistance + Survival In contradistinction, we might say that the exceptionable is the comparative unit of analysis, the exclusive ‘authenticating extension’ that reveals something about the exceptional. It is this outer boundary of the exceptional that consequently reveals both the exceptionable and the exceptional space in question, as distinct and yet interrelated parts of the same whole, namely space and place. In this sense, upon careful inspection, exceptional and exceptionable urban spaces reveal something quite unique. How should we do this? One way to identify an exceptional space would be to turn our focus towards global sites that remain “resistant” in some way. These sites retain common, yet dynamic features depending on the surrounding economic, socio-political or environmental conditions. For 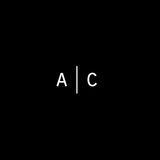