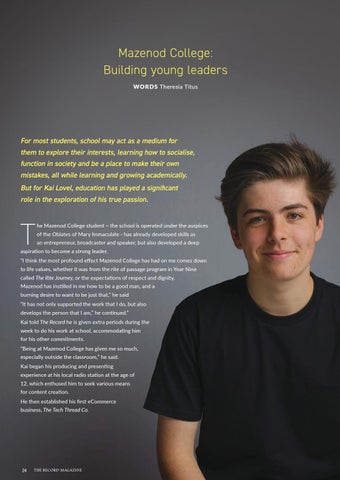 For most students, school may act as a medium for them to explore their interests, learning how to socialise, function in society and be a place to make their own mistakes, all while learning and growing academically. But for Kai Lovel, education has played a significant role in the exploration of his true passion.

he Mazenod College student – the school is operated under the auspices of the Oblates of Mary Immaculate - has already developed skills as an entrepreneur, broadcaster and speaker, but also developed a deep

aspiration to become a strong leader. “I think the most profound effect Mazenod College has had on me comes down to life values, whether it was from the rite of passage program in Year Nine called The Rite Journey, or the expectations of respect and dignity, Mazenod has instilled in me how to be a good man, and a burning desire to want to be just that,” he said “It has not only supported the work that I do, but also develops the person that I am,” he continued.” Kai told The Record he is given extra periods during the week to do his work at school, accommodating him for his other commitments. “Being at Mazenod College has given me so much, especially outside the classroom,” he said. Kai began his producing and presenting experience at his local radio station at the age of 12, which enthused him to seek various means for content creation. He then established his first eCommerce business, The Tech Thread Co. 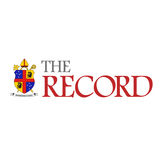 We have a rich and vibrant local Church. With all its different aspects, it is a place where people can gather and unite in the name of Jesu...

We have a rich and vibrant local Church. With all its different aspects, it is a place where people can gather and unite in the name of Jesu...