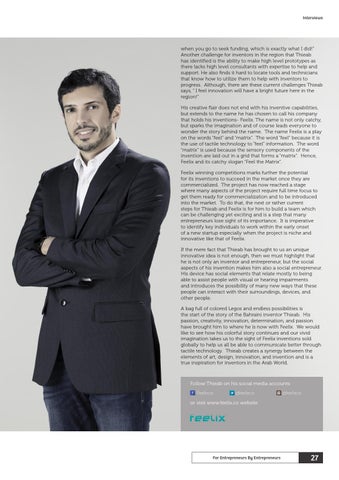 when you go to seek funding, which is exactly what I did!” Another challenge for inventors in the region that Thieab has identified is the ability to make high level prototypes as there lacks high level consultants with expertise to help and support. He also finds it hard to locate tools and technicians that know how to utilize them to help with inventors to progress. Although, there are these current challenges Thieab says, “ I feel innovation will have a bright future here in the region!” His creative flair does not end with his inventive capabilities, but extends to the name he has chosen to call his company that holds his inventions- Feelix. The name is not only catchy, but sparks the imagination and of course leads everyone to wonder the story behind the name. The name Feelix is a play on the words “feel” and “matrix”. The word “feel” because it is the use of tactile technology to “feel” information. The word “matrix” is used because the sensory components of the invention are laid out in a grid that forms a “matrix”. Hence, Feelix and its catchy slogan “Feel the Matrix”. Feelix winning competitions marks further the potential for its inventions to succeed in the market once they are commercialized. The project has now reached a stage where many aspects of the project require full time focus to get them ready for commercialization and to be introduced into the market. To do that, the next or rather current steps for Thieab and Feelix is for him to build a team which can be challenging yet exciting and is a step that many entrepreneurs lose sight of its importance. It is imperative to identify key individuals to work within the early onset of a new startup especially when the project is niche and innovative like that of Feelix. If the mere fact that Thieab has brought to us an unique innovative idea is not enough, then we must highlight that he is not only an inventor and entrepreneur, but the social aspects of his invention makes him also a social entrepreneur. His device has social elements that relate mostly to being able to assist people with visual or hearing impairments and introduces the possibility of many new ways that these people can interact with their surroundings, devices, and other people. A bag full of colored Legos and endless possibilities is the start of the story of the Bahraini inventor Thieab. His passion, creativity, innovation, determination, and passion have brought him to where he is now with Feelix. We would like to see how his colorful story continues and our vivid imagination takes us to the sight of Feelix inventions sold globally to help us all be able to communicate better through tactile technology. Thieab creates a synergy between the elements of art, design, innovation, and invention and is a true inspiration for inventors in the Arab World.