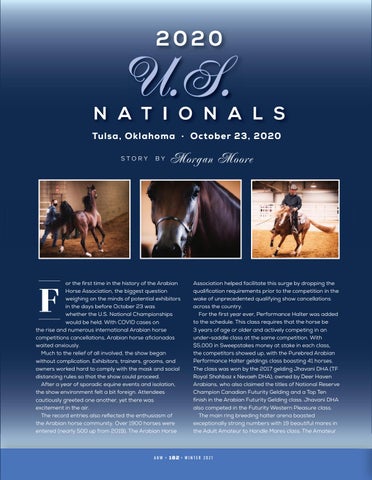 or the first time in the history of the Arabian Horse Association, the biggest question weighing on the minds of potential exhibitors in the days before October 23 was whether the U.S. National Championships would be held. With COVID cases on the rise and numerous international Arabian horse competitions cancellations, Arabian horse aficionados waited anxiously. Much to the relief of all involved, the show began without complication. Exhibitors, trainers, grooms, and owners worked hard to comply with the mask and social distancing rules so that the show could proceed. After a year of sporadic equine events and isolation, the show environment felt a bit foreign. Attendees cautiously greeted one another, yet there was excitement in the air. The record entries also reflected the enthusiasm of the Arabian horse community. Over 1900 horses were entered (nearly 500 up from 2019). The Arabian Horse

Association helped facilitate this surge by dropping the qualification requirements prior to the competition in the wake of unprecedented qualifying show cancellations across the country. For the first year ever, Performance Halter was added to the schedule. This class requires that the horse be 3 years of age or older and actively competing in an under-saddle class at the same competition. With $5,000 in Sweepstakes money at stake in each class, the competitors showed up, with the Purebred Arabian Performance Halter geldings class boasting 41 horses. The class was won by the 2017 gelding Jhavani DHA (TF Royal Shahbaz x Nevaeh DHA), owned by Deer Haven Arabians, who also claimed the titles of National Reserve Champion Canadian Futurity Gelding and a Top Ten finish in the Arabian Futurity Gelding class. Jhavani DHA also competed in the Futurity Western Pleasure class. The main ring breeding halter arena boasted exceptionally strong numbers with 19 beautiful mares in the Adult Amateur to Handle Mares class. The Amateur

mares class had eight horses in the top ten alone who had previously been named National Champion, Reserve National Champion, or Egyptian Event Gold Champion. The class was won by the dynamic, multi-National Champion Ghazala El Jamaal (Marwan Al Shaqab x Foxbriar Parysel), owned by Royal Arabians, who had also previously won a National Champion title in Australia. This year’s judges featured diverse backgrounds and areas of expertise. The result is that some traditionally “halter” judges evaluated performance horses and vice versa. With that said, some were return judges in all arenas. Specifically,

Unanimous Champion Junior Stallion *PRELUDIO OSB (Dominic M x Partyssima OSB), owned by Manny Vierra, Brentwood, California, and shown by Sandro Pinha. “*Preludio was bred by Olivia Strauch in Uruguay. I really liked that horse, and I liked his pedigree as well. So we made the deal,” says Manny Vierra of Valley Oak Arabians. “Handler Sandro Pinha has him dialed in. He showed Preludio as a two-year-old in Brazil, and he’s been bringing him along the right way. In some ways this Covid thing was a bit of a blessing – just slowed everything down. The U.S. Nationals was his second show in the U.S. – The first was the Midsummer Nationals where he was also unanimous Champion. “Shortly after his arrival in the U.S., we had an open house for him at Sandro’s. We sold 40 breedings to him that day. When I first laid eyes on him, I was really impressed. He has so much type, beautiful eyes, beautiful ear set, and tiny ears … so many things I think we’ve lost. And he is so tightly coupled. Short backed. Great legs. Great feet. That’s what we need to get back to. We started him under saddle to give him something to do and get his mind relaxed. He’s a really nice horse to be around. His temperament is just great. I hope that comes through in his get. We will have 25-35 foals on the ground this year, including eight of my own.”

National Champion Canadian Futurity Colt AAOTH JR FRANCOIS (Kavalle MI x JR Francesca), owned by Gary Kehl, Scottsdale, Arizona. “I am happy and proud to have shown GRK Farm’s very first National Champion halter horse, as I have for a few of my other clients. Thanks for the opportunity Mr. Gary Kehl. JR Francois is one of a kind!” — Lucho Guimaraes National Champion Breeders Sweepstakes Performance Halter Stallion AAOTH KHAL DRAGO J (Khadraj x Khassandra J), owned by Ali Brady. “U.S. Nationals 2020 was a first show for Khal Drago J as well as a first Nationals for overseas handler Matthew Winberry! We couldn’t be more elated to have earned the honors of National Champion with this special horse in the first year ever of the Performance Halter!” — owner Ali Brady.

first-born foal of multi-National Champion FVF Bucarrdi, made waves at the show in the Hunter Pleasure division by winning the AHPA $75,000 Futurity with Justin Cowden and also the Arabian Hunter Pleasure AAOTR 60 &amp; Over Class with owner/rider Thomas Hansen. 2020 was certainly a year for the history books from a global perspective. The U.S. National Championships, however, will be remembered for also being historic from a competition quality perspective. With any luck, 2021 will attract record numbers again to our next U.S. National Championship show set to be held in Tulsa,

For more results go to: www.arabianhorseworld.com

Oklahoma, next October. If anything, exhibitors walked away from the competition with a deeper level of gratitude for the opportunity to exhibit Arabian horses. In a year where so many anticipated opportunities were removed, the Arabian horse community exhibited incredible humility and sportsmanship which enabled the 2020 championships to be a resounding success. At the end of the day, however, any gathering can expose one to COVID. Every exhibitor took a calculated risk to participate in the 2020 U.S. National Championships. So

why the elation around the opportunity to compete with the very present risk? For me, as an amateur exhibitor/owner in trail and halter this year, the opportunity to present my horses grants me a few things that riding/handling them at the training barn does not: the opportunity to enjoy my horses unencumbered by the distance between myself and my trainers, the opportunity to present the partnership I have developed with my horse over time, and the chance to surround myself with the inspiration that comes from being with those who share this passion for an extended period of time. In a world where tangible interaction is diminishing, it offers unparalleled connections to like minds – both equine and human. Of course, the trophies are a goal, but achieving the Top Tens for me pales in comparison to the experience.

HA TOSKCAN SUN (Baske Afire x Matoska) with Jim Stachowski. “Beauty, talent, trainability, and pedigree — HA Toskcan Sun is the ‘complete package,’” says breeder Michelle Harris, and owners Scott Harris and Helen Lacey Reed. “His show record and awards include unanimous U.S. National Champion English Pleasure Junior Horse, U.S. National Reserve Champion English Pleasure in three consecutive years, Horse of the Year, English Pleasure Horse of the Year, and Driving Horse of the Year. “The most exciting, however, is his contribution to siring offspring with his characteristics. Toskcan was bred with the dream of recreating my aunt’s breeding program, which included Mi Toska, Toskcan’s grandam and the winningest *Bask daughter. Toskcan’s pedigree has four generations of dams and sires of U.S. National Champions or sires or producers of U.S. National Champions. “Two of the three foals in his first foal crop are U.S. National Champions. The 2020 U.S. Nationals featured his fourth foal crop old enough to show, and Toskcan earned the distinction of the second place sire on Arabian Horse World’s Leading Sires of Purebred Performance, and Purebred Halter and Performance Combined charts. “HA Toskcan Sun’s future is bright and we look forward the bright futures of his offspring.”

See all Leading U.S Nationals Sire Charts on our website.

“After a year of sporadic equine events and isolation the show environment felt a bit foreign. Attendees cautiously greeted one another, yet there was excitement in the air.”