The Masterpiece of Al Shaqab 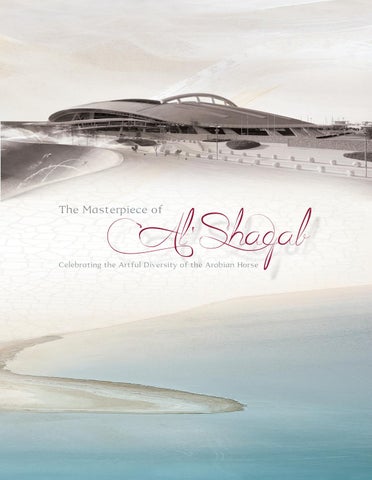 Celebrating the Artful Diversity of the Arabian Horse

Breeding Arabian horses, like life itself, encompasses many things: life and death, victory and defeat, tenacity and humility, loss and triumph. To be a dedicated breeder requires a delicate balance of remaining steadfast in your vision, while also celebrating the strengths of breeding programs other than your own. The great Impressionist painters of the 19th century were primarily known for breaking with convention and opening new realms of vision. Today, we cannot imagine our museums devoid of Monet, Renoir, and Cezanne. But at the time, they were groundbreaking and novel. The breeding program of Al Shaqab can be seen in the same way, as opening new paths, and creating stallions that, like the great works of art, have changed the world. “I’m attempting to take the pollen from every flower and make honey out of it,” says Sheikh Hamad bin Ali Al Thani, who remains as deeply emotional and passionate about this breed as he was as a young boy. For over 30 years he has guided the Al Shaqab program of Qatar, founded by HH The Father Emir Sheikh Hamad bin Khalifa Al Thani, elevating it to world leadership. But being a leader does not mean ignoring what happens elsewhere. Sheikh Hamad honors and incorporates blood from around the world because he recognizes each bloodline’s strength and what it uniquely brings to the table. He will tell you that the Egyptian horses bring refinement and type; the Russian horses bring muscle and powerful movement; the Polish change their breeding frequently, yet they consistently achieve a compact, classic look in their horses, along with beautiful necks and conformation and beautiful movement; the Crabbet horses are strong-bodied and compact with beautifully set eyes; and the American horses are a beautiful collage of assorted silhouettes. He adds, “American horses are wonderful. They are among the best in the world. American breeders are mixing blood from Brazil, Russia, Egypt, America, and others. When I want a show horse, I look to American mares. I love daughters of DA Valentino, Versace, and Padrons Psyche.”

Sheikh Hamad knows his bloodlines. He knows what they offer, and more importantly, what they donâ&amp;#x20AC;&amp;#x2122;t, and it informs his choices. For example, take Ansata Halim Shah, whose use in Qatar swiftly moved the straight Egyptian horse forward on a global scale. Or the incredible Pilar (producer of World Platinum Champion Pinga and Pilarosa, Gold Champion Mare in Poland), who represents the Polish Arabian. Take Abha Myra (dam of Gold World Champion Stallion, Fadi Al Shaqab), a statuesque beauty who represents the American/Spanish Arabian, or the mighty Gazal Al Shaqab, who represents not only Polish and Egyptian, but also the Russian Arabian as well. As a result of this skillful blending, we now also have the Al Shaqab Arabian â&amp;#x20AC;&amp;#x201C; a new creation that is constantly being refined and designed with more added diversity.

Gazal perfectly embodied the Egyptian/Polish cross, which has become the phenotype standard for todayâ&amp;#x20AC;&amp;#x2122;s Arabian halter horse. In addition, his many successful progeny quickly carried him to the top of the chart as a leading sire of the 21st century, including important breeding and show horse sires such as SF Veraz, Sultan Al Zobara, Stival, and Hadidy Al Shaqab. Only one other horse has challenged that position: his son, Marwan Al Shaqab.

The Aisle of Champions

The Aisle of Champions

That November day in 2008, when Marwan took his Paris victory lap, was just the beginning. Marwan would go on to be named the leading sire at the World Championships for an unprecedented five consecutive years, with sons such as Kahil Al Shaqab, Wadee Al Shaqab, Marajj, Marquis CAHR, QR Marc, Baanderos, and EKS Alihandro. His daughters, too, found their way to the winners’ circle: Najdah Al Zobair, Baviera HVP, and even granddaughters like Salwa Al Zobair. “I believe that Marwan is the logo, the brand, of Al Shaqab,” says Sheikh Hamad. “He brought a distinct new look to the Arabian horse. Many horses have come and gone, but only one horse made the change. I’m very proud to have been his breeder. He is historic. I cannot say any more.” A L S H A Q A B &gt; 20 &lt; W O R L D

The Gazal/Marwan legacy is not to be denied. But neither is that of Sheikh Hamad’s most loved horse of all time: the straight Egyptian stallion, Al Adeed Al Shaqab (Ansata Halim Shah x Sundar Alisayyah), foaled in 1995, the same year as Gazal. When asked to define his vision of the perfect Arabian, Sheikh Hamad answers without hesitation: “Al Adeed Al Shaqab.”

Many consider Al Adeed a near perfect example of the breed standard and a testament to just how glorious a straight Egyptian can be. It is, after all, the Egyptian Arabian that is present in all “Golden Crosses.” The Egyptian horse blends perfectly with the Russian horses (for example, Aswan), with the Polish horses (for example, Laheeb, Palas and Gazal), and it blends most beautifully with the Spanish Arabian (for example, *El Shaklan). The Egyptian Arabian is the most constant in all successful bloodline combinations. Al Adeed Al Shaqab not only enjoyed an enormous fan club, he also contributed his exquisite type to the Al Shaqab horses, as well as to other prominent breeding programs around the world. Al Adeed Al Shaqab passed away in 2018 at the age of 23, but his legacy and impact remain untouched.

Al Shaqab When Claude Monet was a boy, he knew he would be an accomplished painter. Early on, Amelia Earhart knew one day she would fly a plane. And from a young, tender age, Hamad bin Ali Al Thani knew that Arabian horses would be at the center of his life and achievements. Artist Robert Henri once said, “The object isn’t to make art; it’s to be in that wonderful state which makes art inevitable.” Driven by nothing but a deep and abiding passion, Sheikh Hamad has created at Al Shaqab a vibrant prism of diversity reflecting many varied bloodlines and celebrating the Arabian horse. Like a light on a hill, it stands as a reminder that the art form you prefer is immaterial, as long as it moves you to create. This is the definition of a breeder. And this is the masterpiece of Al Shaqab.

The Masterpiece of Al Shaqab