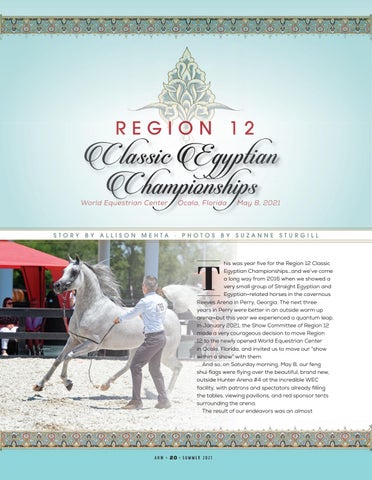 his was year five for the Region 12 Classic Egyptian Championships…and we’ve come a long way from 2016 when we showed a very small group of Straight Egyptian and Egyptian-related horses in the cavernous Reeves Arena in Perry, Georgia. The next three years in Perry were better in an outside warm up arena—but this year we experienced a quantum leap. In January 2021, the Show Committee of Region 12 made a very courageous decision to move Region 12 to the newly opened World Equestrian Center in Ocala, Florida, and invited us to move our “show within a show” with them. And so, on Saturday morning, May 8, our feng shui flags were flying over the beautiful, brand new, outside Hunter Arena #4 at the incredible WEC facility, with patrons and spectators already filling the tables, viewing pavilions, and red sponsor tents surrounding the arena. The result of our endeavors was an almost

perfect, absolutely beautiful arena, gorgeous weather, a highly respected judge and long-term friend of the Egyptian Arabian horse, David Gardner, and an engaged and enthusiastic audience. Moreover, the quality of the horses shown was impressive with a group of about fifty truly beautiful Straight Egyptian and Egyptian-related horses presented, among which were five Scottsdale winners, including the Scottsdale Silver Champion Junior Stallion. During the lunch hour, our judge David Gardner, accompanied by Eileen Verdieck (who attended courtesy of the Pyramid Foundation), hosted a discussion session over the current state and future of the Egyptian Arabian in the United States. The only

complaint we received about the show? That this luncheon symposium didn’t last longer! And so our biggest take-away was how much people seemed to really enjoy the atmosphere of the show—to the point that, quite late in the afternoon, we had to reluctantly ask a couple of groups to leave so we could take down our tents. We now realize that breeders and friends of the Arabian horse sincerely want occasions to discuss their horses, programs, and meet people of similar interests. And providing more opportunity for this is our most important challenge for 2022. The photos really tell it all…but the end result is that our CEC show committee is very excited about the future—and already making plans for next year as our 2021 event at WEC Ocala confirmed that the Region 12 Egyptian Classic Championships are here to stay!

Left to right: Jinksie Harris and Robyn Thomas with Eileen Verdieck. They have been valued supporters of our show for several years now.