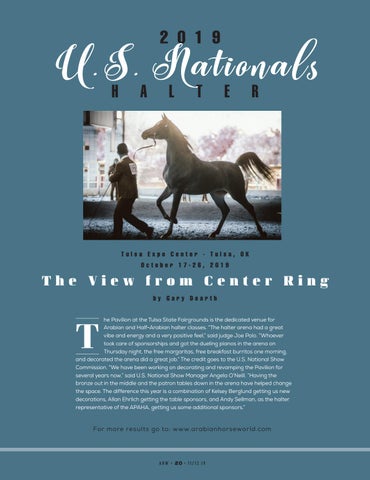 The View from Center Ring by Gary Dearth

he Pavilion at the Tulsa State Fairgrounds is the dedicated venue for Arabian and Half-Arabian halter classes. “The halter arena had a great vibe and energy and a very positive feel,” said judge Joe Polo. “Whoever took care of sponsorships and got the dueling pianos in the arena on Thursday night, the free margaritas, free breakfast burritos one morning, and decorated the arena did a great job.” The credit goes to the U.S. National Show Commission. “We have been working on decorating and revamping the Pavilion for several years now,” said U.S. National Show Manager Angela O’Neill. “Having the bronze out in the middle and the patron tables down in the arena have helped change the space. The difference this year is a combination of Kelsey Berglund getting us new decorations, Allan Ehrlich getting the table sponsors, and Andy Sellman, as the halter representative of the APAHA, getting us some additional sponsors.”

For more results go to: www.arabianhorseworld.com

While many of us enjoyed seeing the senior mare class during the gala Friday night, the judges had a different perspective. “It’s always nice to show in the Ford Truck Arena, however with the small number of horses in the class that night and the size of the arena, we lost the intimate feel that exists when the horses show in the Pavilion,” said judge Joe Polo. “The Pavilion is smaller, so the horses are closer. There was a time when I thought that all of halter should be held in the Ford Truck Arena, but with the improvements in the Pavilion we could hold all of the halter classes there and keep the excitement

going. And it will grow.” Judge Terry Holmes also preferred judging in the Pavilion. “I would have preferred judging both the senior mares and the senior stallions in the Pavilion,” he said. A theme among all judges we spoke with is the extraordinary quality. “We were consistent with one another in most of the classes, and we differed in some because the quality was such that it led us to have a different horse first,” said judge Joe Polo. “In the futurity colts I think all three of us had different first-place horses. The National Champion was consistent along the top of our cards and ended up winning. The junior mare class was so good that there were easily four or five mares that could have been placed first. The winning mare from Argentina, *JJ La Condesa (*Marwan Al Shaqab x JJ La Senorita) shown by David Boggs, was extraordinary. She is a beautiful mare with a big shoulder and is both feminine and elegant.” She was bred and is owned by Haras Mayed from Buenos Aires, Argentina. “The Santabanas family also owns Magnum Psyche, and they own

and bred her dam who is by Magnum Psyche,” said handler David Boggs. “She was National Champion in Argentina as a filly. I saw her in Argentina, and I was blown away by her quality and beauty. Her first show in the United States was Scottsdale this year, where she was named Grand Champion Mare. U.S. Nationals was just her second show in the U.S. She is a beautiful combination of *Marwan Al Shaqab and Magnum Psyche.” The Reserve National Champion in this outstanding class was CW Soleil (Soul of Gazal SF x MA Sonata) shown by Sandro Pinha for owner Manny Vierra. “Sandro Pinha advised me to buy CW Soleil,” said owner Manny Vierra. “I hadn’t seen her up close and I wasn’t familiar with her. But he insisted that I needed to buy her because he felt that she was my kind of horse. He gave me very good advice.” Halter was highlighted Friday evening with the senior mare class being held along with the big money performance futurities. The unanimous winner was *Perfinka (Esparto x *Perfirka), shown by David Boggs for owner Bialka State Stud Farm and lessee Cedar Ridge Arabians. “*Perfinka is an exceptionally beautiful and correct mare,” said Terry

Holmes. “She has won all over the world. She looks like what an Arabian mare should look like.” Judge Joe Polo said, “I love those Polish mares. They are flea bitten grey with big black eyes, and when they come in the ring they can move. *Perfinka fits my idea of the classic Arabian horse.” Judge Steve Lieblang remembered her as a youngster. “I judged *Perfinka in England as a two-year-old and I gave her very high scores. As a two-year-old she was great,” he said. “Dick is the one who really wanted this mare, but they won’t sell her,” said Lollie Ames. “He was determined to get her, and he offered a lot of money a couple of times, which they turned down. Finally, he was able to get the lease done. I’ve been around a lot of horses, but I’ve never been around a mare like her. It’s going to be a sad day when she goes back. Right now, we have an embryo by Magnum Psyche and two embryos by DA Valentino for next year. We are keeping our fingers crossed.” The Reserve National Champion Senior Mare was Aria Qatars Angel (*Abha Qatar x

Champion Senior Gelding Open and AAOTH Versailles PCF (Pstrategy x Veronica GA), owned by Highland Pride Arabians Inc., La Habra Heights, California, and shown by Sandro Pinha, left, and Sarah Esqueda, second from left. Also pictured (l-r): Keri and Tony Esqueda, Allison Pigott, and Caitlin Pigott. “Versailles is the sweetest horse I own,“ says Sarah Esqueda, “After every halter class I go in his stall and he will place his head in my lap and just wants to be loved on. Very blessed to own a horse that loves to show and that loves his people.”

ORDER OF OUR PLACING, I LIKE THAT WE ARE BACK TO

BHF Dark Angel) shown by Sandro Pinha for owner Manny Vierra. It is interesting to note that Manny Vierra owns both the Reserve National Champion Senior and Junior mares this year. “This was the biggest year I’ve ever had, having two horses win like that,” said Manny Vierra. “When I show I want to have a good horse, with a good handler, and get fair treatment. We’ll be back next year to try again.” Manny went on to express the sentiments shared by all of us when he said, “Arabian horses are my passion. Some would say it is an addiction. I have sixty-five horses and I need to reduce the herd. But once you’ve been around them it’s hard to let them go.” Another dominant winner was *SM Azraff (*Faraa Al Shaqab x LC Psychesfinesse), the unanimous U.S. National Champion Senior Stallion. “He is an amazing horse,” said judge Terry Holmes. “He has everything that we want in an Arabian horse. He is very close to the Gladys Brown Edwards painting that is our

standard. He is what an Arabian horse should look like. He’s just so correct and beautiful.” Both of the yearling winners were also unanimous. Aria Venetian Lace (EKS Alihandro x BH Beijings Velvet), shown by Andy Sellman for owner Khidam El Shawan Partners, LLC, won the large yearling filly class. And Rhan Al Shahania (*Marwan Al Shaqab x Jwaaher Al Shahania), shown by Michael Byatt for Al Shahania Stud, won the yearling colt class. Even though we no longer use the scorecard to judge our halter horses, it is still part of the conversation about our judging procedures. “I know everybody hated the halter scorecards,” said judge Steve Lieblang. “But over the years with the scorecards you could see that the top horses in the classes were only a half

a point to two points apart, a hairline difference. For instance, in the junior mare class, the top four or five horses could rightly have been placed one through five in any order based on your personal preferences. The class was that good and the horses were that close in quality.” Judge Joe Polo’s perspective on the use of the point system was a little different. “People loved the point system because they felt that it made the judges accountable,” he said. “However, here’s nothing more accountable than as soon as the class is over and they have tabulated the cards walking out into the middle of the arena so that the horses you placed can come and stand in front of you in the order that you placed them. The owners, breeders and spectators can immediately see what you did. That is instant accountability. It gives a judge the opportunity to take ownership of what we just did.” Judge Steve Lieblang agreed with lining up the judge’s selections. “I love it when they pull the horses out in front of us in the order of our placing,” he said. “I like that we are back to comparative judging,” said judge Terry Homes. “It is easier and better. And I

think we come out with the same winners. I also believe the crowd enjoys it more.” “I don’t know how much more we can ‘improve’ on the individuals that are being presented today,” said judge Steve Lieblang. “The horses have gotten so good.” While breeders strive to breed their vision of the perfect Arabian horse and there is always room for improvement, Steve’s words underscore the extraordinary quality of the halter division at this year’s U.S. National Show.

Hear from the judges about their opportunity to view extraordinary quality in this year’s halter division, by Gary Dearth

Hear from the judges about their opportunity to view extraordinary quality in this year’s halter division, by Gary Dearth