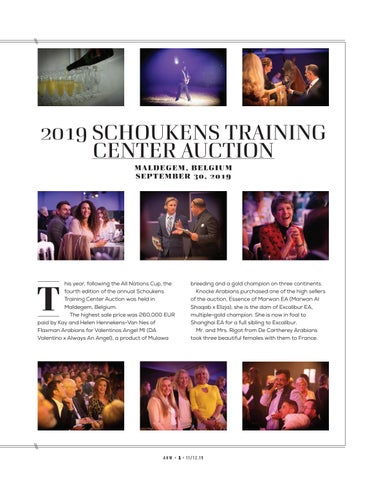 his year, following the All Nations Cup, the fourth edition of the annual Schoukens Training Center Auction was held in Maldegem, Belgium. The highest sale price was 260,000 EUR paid by Kay and Helen Hennekens-Van Nes of Flaxman Arabians for Valentinos Angel MI (DA Valentino x Always An Angel), a product of Mulawa

breeding and a gold champion on three continents. Knocke Arabians purchased one of the high sellers of the auction, Essence of Marwan EA (Marwan Al Shaqab x Elizja), she is the dam of Excalibur EA, multiple-gold champion. She is now in foal to Shanghai EA for a full sibling to Excalibur. Mr. and Mrs. Rigat from De Cartherey Arabians took three beautiful females with them to France.

VALENTINOS ANGEL MI (DA Valentino x Always An Angel) was the high seller, purchased by Kay and Helen HennekensVan Nes (above) of Flaxman Arabians of Belgium.

while other horses were sold to breeders from Abu Dhabi, the Kingdom of Saudi Arabia, the United Kingdom, and the U.S. In addition to the three horses sold to France, one was sold to the Netherlands and four Belgian buyers. Money was raised in support of the Eye Hope Foundation. The Foundation gathers money to support and initiate projects on finding an effective treatment to slow down the progress of and finding a cure for Wolfram Syndrome, a rare, inherited condition for which there is no known cure at this moment. Knocke Arabians donated a breeding to their World Champion QR Marc, which sold for 20,000 EUR to Albaydaa Stud of Egypt. Arabian Soul Partners gifted the last lot in the auction â&#x20AC;&#x201D; the

ARMANI AS (Raoud Albidayer × Chanel AS), purchased by Eriska Arabians of the UK, brought the ‘awwww’ factor, being the only weanling offered.

sensational colt Armani AS. Armani AS went to Eriska Arabians of the UK for 32,000 EUR. There were also some surprise showings when four of the breed’s most influential sires were greeted with adoring cheers: Gold World Champion QR Marc (Marwan Al Shaqab x Sweet Dreams), “The Champion Maker,” WH Justice (Magnum Psyche x

Vona Sher Renea), ES Sarab (Marajj x Mahjesty), a young and upcoming sire, and SMA Magic One (Psytadel x Majidah Bint Pacha). Schoukens Training Center deeply appreciates the efforts of all those who helped to make this event such a success and looks forward to the 5th annual STC Auction in 2020.

“The Champion Maker,” WH JUSTICE (Magnum Psyche x Vona Sher Renea), made a surprise visit to the delight of the crowd.

Many thanks to Al Baydaa Stud, Knocke Arabians, Arabian Soul Partners & Eriska Arabians for their support of Eye Hope Foundation.

This year, following the All Nations Cup, the fourth edition of the annual Schoukens Training Center Auction was held in Maldegem, Belgium.

This year, following the All Nations Cup, the fourth edition of the annual Schoukens Training Center Auction was held in Maldegem, Belgium.