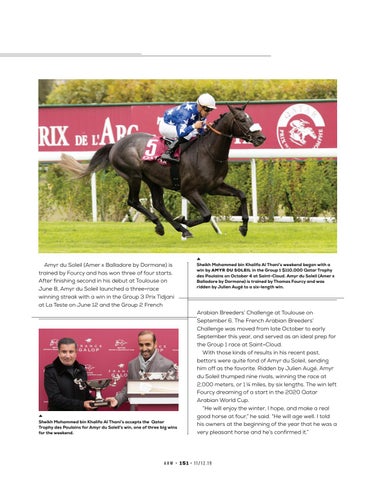 Amyr du Soleil (Amer x Balladore by Dormane) is trained by Fourcy and has won three of four starts. After finishing second in his debut at Toulouse on June 8, Amyr du Soleil launched a three-race winning streak with a win in the Group 3 Prix Tidjani at La Teste on June 12 and the Group 2 French

Sheikh Mohammed bin Khalifa Al Thani’s weekend began with a win by AMYR DU SOLEIL in the Group 1 $110,000 Qatar Trophy des Poulains on October 4 at Saint-Cloud. Amyr du Soleil (Amer x Balladore by Dormane) is trained by Thomas Fourcy and was ridden by Julien Augé to a six-length win.

Arabian Breeders’ Challenge at Toulouse on September 6. The French Arabian Breeders’ Challenge was moved from late October to early September this year, and served as an ideal prep for the Group 1 race at Saint-Cloud. With those kinds of results in his recent past, bettors were quite fond of Amyr du Soleil, sending him off as the favorite. Ridden by Julien Augé, Amyr du Soleil thumped nine rivals, winning the race at 2,000 meters, or 1 ¼ miles, by six lengths. The win left Fourcy dreaming of a start in the 2020 Qatar Arabian World Cup. “He will enjoy the winter, I hope, and make a real good horse at four,” he said. “He will age well. I told his owners at the beginning of the year that he was a very pleasant horse and he’s confirmed it.”