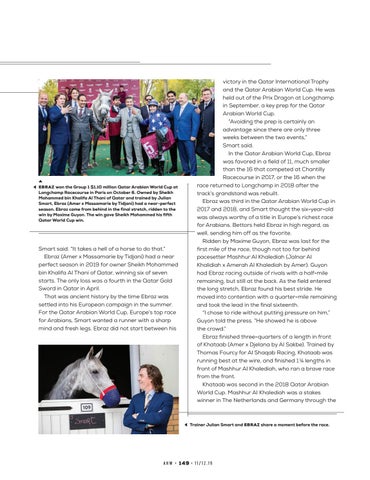 Smart said. “It takes a hell of a horse to do that.” Ebraz (Amer x Massamarie by Tidjani) had a near perfect season in 2019 for owner Sheikh Mohammed bin Khalifa Al Thani of Qatar, winning six of seven starts. The only loss was a fourth in the Qatar Gold Sword in Qatar in April. That was ancient history by the time Ebraz was settled into his European campaign in the summer. For the Qatar Arabian World Cup, Europe’s top race for Arabians, Smart wanted a runner with a sharp mind and fresh legs. Ebraz did not start between his

victory in the Qatar International Trophy and the Qatar Arabian World Cup. He was held out of the Prix Dragon at Longchamp in September, a key prep for the Qatar Arabian World Cup. “Avoiding the prep is certainly an advantage since there are only three weeks between the two events,” Smart said. In the Qatar Arabian World Cup, Ebraz was favored in a field of 11, much smaller than the 16 that competed at Chantilly Racecourse in 2017, or the 16 when the race returned to Longchamp in 2018 after the track’s grandstand was rebuilt. Ebraz was third in the Qatar Arabian World Cup in 2017 and 2018, and Smart thought the six-year-old was always worthy of a title in Europe’s richest race for Arabians. Bettors held Ebraz in high regard, as well, sending him off as the favorite. Ridden by Maxime Guyon, Ebraz was last for the first mile of the race, though not too far behind pacesetter Mashhur Al Khalediah (Jalnar Al Khalidiah x Amerah Al Khalediah by Amer). Guyon had Ebraz racing outside of rivals with a half-mile remaining, but still at the back. As the field entered the long stretch, Ebraz found his best stride. He moved into contention with a quarter-mile remaining and took the lead in the final sixteenth. “I chose to ride without putting pressure on him,” Guyon told the press. “He showed he is above the crowd.” Ebraz finished three-quarters of a length in front of Khataab (Amer x Djelana by Al Sakbe). Trained by Thomas Fourcy for Al Shaqab Racing, Khataab was running best at the wire, and finished 1 ¼ lengths in front of Mashhur Al Khalediah, who ran a brave race from the front. Khataab was second in the 2018 Qatar Arabian World Cup. Mashhur Al Khalediah was a stakes winner in The Netherlands and Germany through the

Trainer Julian Smart and EBRAZ share a moment before the race.