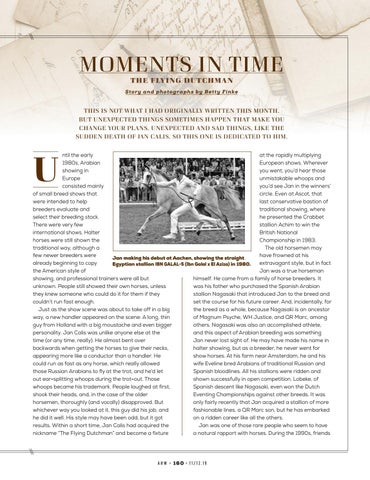 MOMENTS IN TIME THE FLYING DUTCHMAN

THIS IS NOT WHAT I HAD ORIGINALLY WRITTEN THIS MONTH. BUT UNEXPECTED THINGS SOMETIMES HAPPEN THAT MAKE YOU CHANGE YOUR PLANS. UNEXPECTED AND SAD THINGS, LIKE THE SUDDEN DEATH OF JAN CALIS. SO THIS ONE IS DEDICATED TO HIM.

ntil the early at the rapidly multiplying 1980s, Arabian European shows. Wherever showing in you went, you’d hear those Europe unmistakable whoops and consisted mainly you’d see Jan in the winners’ of small breed shows that circle. Even at Ascot, that were intended to help last conservative bastion of breeders evaluate and traditional showing, where select their breeding stock. he presented the Crabbet There were very few stallion Achim to win the international shows. Halter British National horses were still shown the Championship in 1983. traditional way, although a The old horsemen may few newer breeders were have frowned at his Jan making his debut at Aachen, showing the straight already beginning to copy extravagant style, but in fact Egyptian stallion IBN GALAL-5 (Ibn Galal x El Aziza) in 1980. the American style of Jan was a true horseman showing, and professional trainers were all but himself. He came from a family of horse breeders. It unknown. People still showed their own horses, unless was his father who purchased the Spanish Arabian they knew someone who could do it for them if they stallion Nagasaki that introduced Jan to the breed and couldn’t run fast enough. set the course for his future career. And, incidentally, for Just as the show scene was about to take off in a big the breed as a whole, because Nagasaki is an ancestor way, a new handler appeared on the scene: A long, thin of Magnum Psyche, WH Justice, and QR Marc, among guy from Holland with a big moustache and even bigger others. Nagasaki was also an accomplished athlete, personality. Jan Calis was unlike anyone else at the and this aspect of Arabian breeding was something time (or any time, really). He almost bent over Jan never lost sight of. He may have made his name in backwards when getting the horses to give their necks, halter showing, but as a breeder, he never went for appearing more like a conductor than a handler. He show horses. At his farm near Amsterdam, he and his could run as fast as any horse, which really allowed wife Eveline bred Arabians of traditional Russian and those Russian Arabians to fly at the trot, and he’d let Spanish bloodlines. All his stallions were ridden and out ear-splitting whoops during the trot-out. Those shown successfully in open competition. Lobeke, of whoops became his trademark. People laughed at first, Spanish descent like Nagasaki, even won the Dutch shook their heads, and, in the case of the older Eventing Championships against other breeds. It was horsemen, thoroughly (and vocally) disapproved. But only fairly recently that Jan acquired a stallion of more whichever way you looked at it, this guy did his job, and fashionable lines, a QR Marc son, but he has embarked he did it well. His style may have been odd, but it got on a ridden career like all the others. results. Within a short time, Jan Calis had acquired the Jan was one of those rare people who seem to have nickname “The Flying Dutchman” and become a fixture a natural rapport with horses. During the 1990s, friends

// may not have won, Jan was always sure to get the biggest round of applause. He was a living legend, the mentor of European show trainers. And he could still run faster than many younger handlers. Only a month ago, he presented his new young stallion for registration in Germany. No one dreamed that this was the last horse he would show, the final round of applause. Jan had plans for next year, thinking of bringing his beloved old Lobeke back from retirement once more. In 2020, their

Dancing with his own stallion GASIR (Motamid x Braken) in a liberty class at the Tulip Cup in Holland, 2012. MIDDLE RIGHT:

HE COULD RUN AS FAST AS ANY HORSE, WHICH REALLY ALLOWED THOSE RUSSIAN ARABIANS TO FLY AT THE TROT, AND HE’D LET OUT EAR-SPLITTING WHOOPS DURING THE TROT-OUT.

of mine sent one of their fillies to him for training. She was a little nervous and she had an issue with getting into trailers. When she returned, she was much more relaxed and trailered like a pro. That’s not something you often hear when horses came back from professional training (sadly!). As for his own horses, with some, like his precious Lobeke, he seemed to have a special bond. Another was Gasir, also a Spanish stallion, whom he frequently showed in liberty classes a few years ago. It was like watching a carefully choreographed double act, and of course they usually won. Today there are many young and successful handlers, and being well past retirement age, Jan didn’t do much showing during the last couple of years. In fact, although he had been instrumental in putting the showmanship into Arabian shows, he had become disillusioned with the development of modern showing and disapproved of the way some handlers treat their horses. But he’d always be there, ready to greet you with a smile and a hug. He would still show the occasional horse, usually his own, which meant that they were not really show horses. But while they

combined ages would have been 100 years. Wouldn’t that have been something to see! Instead, for the third time in short succession, we have lost one of the most prominent and colorful figures in the Arabian community. Jan has gone to join Ryan Jones and Wolfgang Eberhardt in that great showground in the sky, where, I like to think, Nagasaki and other old friends were waiting for him. We are left to mourn their loss, but also to honor their memory and keep their spirit alive. Let us treat the creatures entrusted to our care with the kindness and respect they deserve. And let us cherish the time we spend with friends, because we never know how long they will be with us.

Moments In Time: The Flying Dutchman

Farewell to a great horseman, by Betty Finke

Moments In Time: The Flying Dutchman

Farewell to a great horseman, by Betty Finke