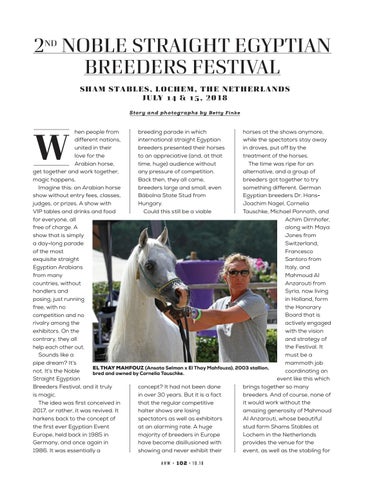 hen people from breeding parade in which horses at the shows anymore, different nations, international straight Egyptian while the spectators stay away united in their breeders presented their horses in droves, put off by the love for the to an appreciative (and, at that treatment of the horses. Arabian horse, time, huge) audience without The time was ripe for an get together and work together, any pressure of competition. alternative, and a group of magic happens. Back then, they all came, breeders got together to try Imagine this: an Arabian horse breeders large and small, even something different. German show without entry fees, classes, Bábolna State Stud from Egyptian breeders Dr. Hansjudges, or prizes. A show with Hungary. Joachim Nagel, Cornelia VIP tables and drinks and food Could this still be a viable Tauschke, Michael Ponnath, and for everyone, all Achim Dirnhofer, free of charge. A along with Maya show that is simply Jones from a day-long parade Switzerland, of the most Francesco exquisite straight Santoro from Egyptian Arabians Italy, and from many Mahmoud Al countries, without Anzarouti from Syria, now living handlers and in Holland, form posing, just running the Honorary free, with no Board that is competition and no actively engaged rivalry among the with the vision exhibitors. On the and strategy of contrary, they all the Festival. It help each other out. must be a Sounds like a mammoth job pipe dream? It’s EL THAY MAHFOUZ (Ansata Selman x El Thay Mahfouza), 2003 stallion, coordinating an not. It’s the Noble bred and owned by Cornelia Tauschke. event like this which Straight Egyptian brings together so many concept? It had not been done Breeders Festival, and it truly breeders. And of course, none of in over 30 years. But it is a fact is magic. it would work without the that the regular competitive The idea was first conceived in amazing generosity of Mahmoud halter shows are losing 2017, or rather, it was revived. It Al Anzarouti, whose beautiful spectators as well as exhibitors harkens back to the concept of stud farm Shams Stables at at an alarming rate. A huge the first ever Egyptian Event Lochem in the Netherlands majority of breeders in Europe Europe, held back in 1985 in have become disillusioned with Germany, and once again in provides the venue for the showing and never exhibit their 1986. It was essentially a event, as well as the stabling for A H W &gt; 102 &lt; 1 0 . 1 8

“IT IS OUR DREAM TO HAVE CREATED A PLATFORM, AN ATMOSPHERE AND A PLACE WHERE ALL THE MAGIC AROUND THIS EXQUISITE BREED CAN BE SHOWN WITHOUT JUDGING AND WITHOUT PRIZES.”

the horses and the catering for the guests. Last year’s Festival was a one-day affair, tucked on to the Egyptian Event Europe. It was a huge success with everyone, the exhibitors as well as the guests, for many of whom it was the highlight of the year. So they decided to do it again, and make it even bigger and better: this time, it was going to be not just one day, but two. Could it really be done? Could this outstanding success not only be repeated, but topped? As it turned out, it could. Rather than added onto the Egyptian Event Europe, it was pulled forward into July, right after the 50th anniversary

celebration at Dr. Nagel’s Katharinenhof Stud, which is just two hours’ drive from Sham Stables. This enabled guests from far away to make a big 3-day weekend of it, filled to the brim with gorgeous Egyptian horses. It doesn’t get much better than this. The two days were necessary, too, in order to do justice to the number of horses. Most of last year’s exhibitors had returned, along with a host of new ones, making a total of 29 breeders from five countries, exhibiting 126 horses. Those that were back included Marbach State Stud from Germany, this time showing two of their straight Egyptian broodmares in

Hungarian harness, as well as most of the larger German straight Egyptian breeders in Germany whose horses you normally don’t see at the shows these days, such as El Thayeba, Birkhof, Ponnath Arabians, Al Muntaha Arabians, El Bediya Arabians, and Al Qusar Arabians. Even Dr. Nagel, who had hosted a big showing of his horses at his farm the previous day, took some of his horses to Lochem, including his new rising star NK Nabhan and some of his foals. Among the newcomers were Germany’s Hägerhof and Hardyna Studs, both specializing in beautiful black straight Egyptians, Pintar Arabians from Slovenia, and Topis Arabians and Al Safi Stud from Belgium. Small breeder Dr. Daniel Wigger from Germany, whose program is based on Dr. Nagel’s lines, had even brought all his horses – a half dozen – to Lochem, demonstrating what amazing treasures are hidden away at smaller farms. As an added bonus, the horses of Sham Stables were

To encounter a straight Egyptian horse is to meet the highest form of elegance, sensitivity, history and beauty in one moment. And as every true Egyptian horse lover knows: every day feels like you meet them for the first time. They have so much to tell us, so much to teach us, and so much to show us, and this is why we are here together at the Noble Festival 2018. It is our dream to have created a platform, an atmosphere, and a place where all the magic around this exquisite breed can be shown without judging and without prizes. Where breeders can proudly present their best horses: stallions and their valuable broodmares and offspring. And in this way give other breeders and enthusiasts an impression of their views so we can learn from each other and inspire each other.

shown in a special private showing on the evening of

two of Shams Stables’ beautiful white mares, and a

the first day, providing an opportunity to catch up

with last year’s foals and to see the foundation

mares, and of course the glamorous Straight

Grace” and “My Way,” there was barely a dry eye left

Mahmoud Al Anzarouti had recently lost one of his

It would be easy to fill pages with details and

praises of all the horses shown on this magical

was appropriately named Malaak’s Gift, and her

summer weekend, but this is a story best told in

proud breeder led her around the ring himself.

pictures. If you weren’t there, you missed something

On the same evening, there was also a surprise

wonderful. It is too early to say, but perhaps there

will be another one, though this would be even

harder to top. But maybe the magic will work once

together and work together, united by their love and

With special gifts being presented in the presence of

passion for the Arabian horse.

When people, united in their love for the Arabian horse, work together magic happens, by Betty Finke