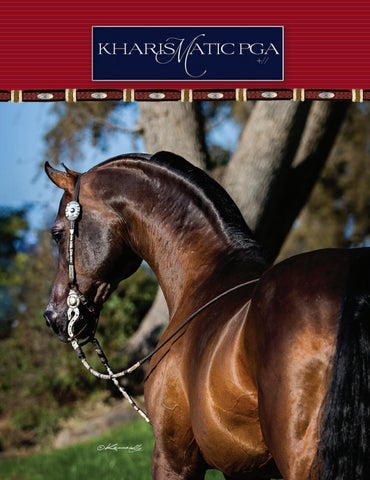 The Gentle Giant by

s a seven-time National Champion in open and amateur western pleasure, and winner of the Legion of Excellence, Kharismatic PGA+// (*Khadraj NA x Aphrodite FA) was a dominant force in the western division. But showring prowess doesnâ&amp;#x20AC;&amp;#x2122;t always translate into success as

a breeding horse. If the recent significant wins of his first foals are any indication, he is one of those rare individuals whose breeding career may outstrip his massive success in the showring. At this yearâ&amp;#x20AC;&amp;#x2122;s Canadian Nationals, Kharismatic offspring dominated the western pleasure junior horse classes. The unanimous National Champion in the purebred class was Khohinoor MW (Kharismatic PGA+// x Ladys Dance), bred by Becker Stables and owned by Marta Wasiak. Aur U Kruzn Forabruzn (Kharismatic PGA+// x Aur U Oso Sassy), bred by Shannon Anguiano and Steve and Karen Freeman and owned by Steve and Karen Freeman, won the Half-Arabian Championship. Both horses were shown by Brett Becker. Aur Kinda Party (Kharismatic PGA+// x Sheza Loded Lady), bred and owned by Sally Leonardini

weanling and a yearling, and he was truly one

of the most beautiful colts you could ever see,”

says breeder Devon Benbrook. “I had a great foal

crop that year, and he was definitely the most

beautiful of the group. He continued to grow up

Kharismatic is an interesting combination of

that way. I am thrilled that he is creating the next

him out of one of Devon’s pastures as a western

Simplicity). “I have pictures of Kharismatic as a

prospect for Nicci Waldschmidt. After showing

as a junior horse for the Waldschmidts, he was reluctantly sold to the Pitassi family. “The Pitassis

were looking for a new horse, but Kharismatic was not for sale,” says Brett. “Karen called every

who just took off and was great. We hoped that

week with a new offer until Nicci finally said

would be the case when we bought him, but you

okay.” Their persistence paid off. Over five years,

never really know until you start showing them,

he won a total of seven National Championships,

especially in amateur. We later realized he could

with four of them being unanimous. “Once

also be successful in open, and we often showed

Nicole figured out how to ride him, they were

him in both at the same time, which is rare. A

unbeatable,” continues Brett. “They were a great

lot of times when horses are being shown open,

the amateurs can’t ride them, so, we weren’t sure

daughter Nicole and Brett are the ones who

if that would work. He was amazing, because

showed him. He was one of those amazing horses

after showing open with Brett he would come

Curiously, the Pitassis had no specific interest

didn’t change his personality at all. He was still

in breeding “Matt,” and it wasn’t until Brett

urged them to start breeding him to a few mares

been one of those stallions that you can walk into

that they decided to give it a try. “When Brett

his stall and hug and kiss him and he is fine.”

first suggested that we start breeding him, I was

We asked Brett, why choose Kharismatic for

your mare? “One of the reasons breeders should

him harder to show,” says Karen Pitassi. “After

consider Kharismatic is because he is different,”

breeding a couple of mares, we realized that it

he says. “He’s going to sire size and substance. All

of his foals are very much like him, and there isn’t a small one. They are quiet and easy to train. He will sire usability. And he will throw a big, long, archy neck. It doesn’t matter what kind of mare you breed to him. If someone has a short-necked mare, they should breed her to Kharismatic. “When my wife Marjie was National Champion open hunter on Ladys Dance (Sundance Kid V x SDA Lady Jabask), Marta Wasiak followed her back to our barn and tried to buy the mare,” says Brett. “When she couldn’t

Michael Damianos. “In the days when Brett was

buy her, she purchased an embryo. Later in the

showing Kharismatic a lot, I stabled across the

“Consequently, I saw Brett school him, I saw

the stalls and said she wanted to buy a breeding

him in the ready room, with Brett’s staff, and of

for her Ladys Dance embryo. Even though those

course I saw him show. He was a great western

are two great horses, we all know that you can

horse with a great hind end. And usually when

breed two great parents and get a dud. However,

you have a great hindquarter, you don’t have a

the resulting foal was Khohinoor MW, who is now

hooky neck. But he was the rare individual who

had both. He’s stout with a lot of substance. He

One of the first “outside” trainers to

screams western horse. As a result, I have always

experience one of Kharismatic’s offspring is

wanted a Kharismatic baby. I was excited when I

was able to get Automatic (Kharismatic PGA+// x

Ava Luna V) for Muna Busailah. And I would love

at Regions 1 and 2 this year. He is also a very

to have more. Automatic is the best trail futurity

good western pleasure horse. In the future he

prospect I have ever ridden. And I’ve ridden a

will be shown in trail and both open and amateur

lot of winners in the trail futurity. He epitomized

what I look for in a great trail prospect when

I first saw him as a four-year-old at Brett’s.

horseman and judge who is excited about

He is a really good natural loper, he is calm,

Kharismatic as a sire is Bill Melendez. “We were

and the cherry on the sundae is that he is also

among the first people to breed to him, because

Futurity. And while he has already had significant show ring success, Stephanie raves about his attitude. “He is a sixteen-hand gelding that was purchased for a 13-and-under rider. He is so quiet that when I tried him for purchase, he’d only had about fifteen rides on him and was still in the round pen. If she had been with me, I’m confident that girl could’ve walked, trotted and cantered him. In fact, the day before I left for the U.S. Nationals last year, when he was just three years old, his twelve-year-old little girl was riding him around bareback with a halter and lead I have always loved him,” says Bill. “I judged

rope in my arena.” No wonder Stephanie loves

him at his first show and was one of the judges,

along with Gary Dearth, who made him National

“What makes Kharismatic extra special is

Champion open at the Canadian Nationals in

that he’s a gentle giant,” says Brett. “He is a very

substantial horse. He has almost a Quarter Horse

x I Dream Of Diamonds), bred and owned by

body type with the refinement of an Arabian.

Everything about him is huge. Great big feet, big

year as a four-year-old in western pleasure with

bone. But he sires foals that are still typey, even

our son Ryan, and now Ryan and his mother

though they have that size.”

Kristal will show him at U.S. Nationals this year.

The ability to consistently pass on those

I love his quality. In fact, all of the Kharismatic

traits to his offspring will set him apart as a sire.

offspring I have seen have stunning quality and

are built like western horses. Kristal also has a

showring,” says Karen Pitassi. “And then when

younger full sibling that is outstanding.”

they announce him as the sire it is really cool.

Part of ‘Matt’ is back out there. “Honestly, we had no idea what we had as a breeding horse. We just love this horse.”

Owned by the Pitassi family and trained by Brett Becker, Kharismatic PGA the gentle giant is a multi-National champion and sire of National Champions. by Gary Dearth