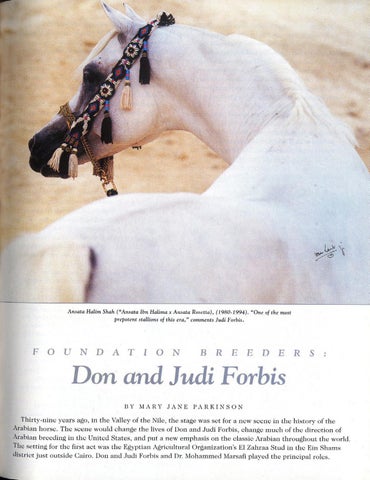 This year marks the 60th anniversary of the founding of Ansata Arabian Stud by Judith Forbis and her late husband Don. As Cynthia Culbertson noted recently, “When it comes to the realm of Arabian horses, there is no private breeder in the world more successful than Judith Forbis. The straight Egyptian Arabian horses of Ansata have influenced Arabian horses in virtually every country where these noble horses are found.” It’s a fitting time to have a look back at Arabian Horse World’s Ansata Arabian Stud Foundation Breeder story by Mary Jane Parkinson, published in our May 1997 issue, which traces the Forbises’ adventures in the Middle East and the discovery of their foundation stock, to the world wide influence their stud ultimately achieved.