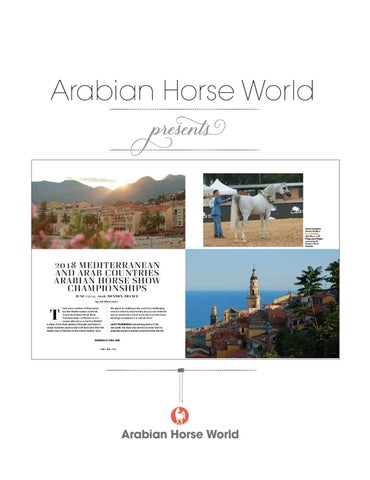 here are a number of shows prior, but the Mediterranean and Arab Countries Arabian Horse Show Championships, or Menton as it is simply referred to, is the first ECAHO A show of the show season in Europe. And there is simply no better place to kick it off each year than the sleepy town of Menton on the French Riviera. Sure,

the space for stabling is tiny, and it is a challenging venue in which to show horses, but you can smell the salt air and throw a stone to the sea from the arena. All things considered, it is “joie de vivre.” LAZY MORNINGS and evening swims in the sea aside, the show also serves as a kick-start to potential laurels in Aachen and Paris later this fall.

To be crowned champion in Menton means you are leading the race for World Champion. It is especially noteworthy for yearlings; while some may have competed in the Middle East earlier this spring, it is the first glimpse of them on European soil.

THIS YEAR, the challenges of Menton were a bit more formidable due to inclement weather for the championships. What started as a perfect day deteriorated with lashing wind and rain by the time the class winners were vying for top honors.

Did it change things? Maybe. Some big-trotting horses, frankly, refused to trot, and others gave distracted stand-ups as the trainers did their best despite the conditions. Certainly these horses will not face such conditions in the indoor arenas in Aachen and Paris.

REGARDLESS, CHAMPIONS were crowned, and their connections celebrated such illustrious wins. By evening, the wind and rain had dissipated, and the seaside village settled into its usual calm with clear skies and lights reflected in the harbor. The European summer show season has officially begun â&amp;#x20AC;&amp;#x201D; time to enjoy the delights of the season before we fade into fall all too soon.

A championship in Menton means you are leading the race for World Champion, by Jeffrey Wintersteen