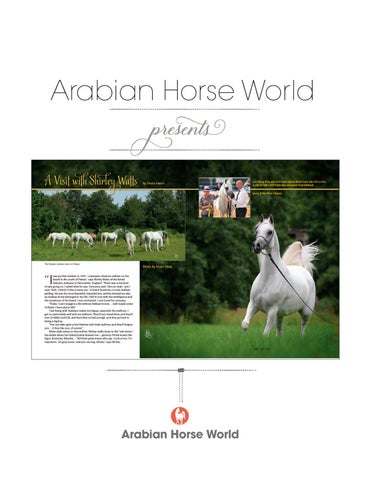 The Halsdon Arabian mares in Poland.

saw my first Arabian in 1974 – a fantastic chestnut stallion on the beach in the south of France,” says Shirley Watts of the famed Halsdon Arabians in Devonshire, England. “There was some kind of sale going on, I asked what he was. Someone said, ‘He’s an Arab,’ and I said, ‘Well, I think I’d like to have one.’ A friend found me a lovely Arabian gelding. He was the most beautiful, beautiful boy, and he showed me why an Arabian horse belonged in my life. I fell in love with the intelligence and the sweetness of the breed. I was enchanted. I just loved his company. “Today, I can’t imagine a life without Arabian horses … well maybe some of them! I have about 200! “Just being with Arabians makes me happy, especially the stallions. I get on particularly well with my stallions. They’ll just stand there and they’ll sort of nibble and lick, and then they’ve had enough, and they go back to being a big boy. ”You can take quite a few liberties with Arab stallions and they’ll forgive you ... if they like you, of course!” When dusk comes to Devonshire, Shirley walks down to the “rest home,” the stable where her retired prima donnas live – glorious Polish mares like Egna, Emmona, Elandra ... “All these great mares who say, ‘Look at me, I’m important,’ all grey mares, and just one bay, Albula,” says Shirley.

“Annette is a darling,” Shirley says. “Marek Trela believes that she is the image of her mother in movement and attitude. She had a beautiful stand-up in Strohen, but she was too scared to trot. We’ll put her away for a couple of years. You have to have patience, and not rush them straight away. But of course, they come from such a tranquil environment, it’s quite a shock to them to go to the show.” Annette’s dam Altamira descends from Algeria, the Queen of Janów, a favorite of the late Director Krzyształowicz.

“Emmona was up for sale last winter, and I asked a friend to go to Poland and buy her for me. We just didn’t know what would happen to her after Poland’s Stud Directors were relieved of their duties. When she came here, she got off the lorry very nonchalantly and looked around as if to say, ‘OK, where’s my stable?’ “I’ve had so many wonderful mares, but when I look at her and she just stands there, she looks like the perfect Arabian mare from the tips of her ears to the tip of her tail. “But she wasn’t pleased when I brought Arbula down to the rest home. I think she thought Arbula was rather common because she wasn’t grey. They are such prima donnas, especially as they get older!” With over 40 years of breeding Arabians behind her, we wondered what has been the most meaningful experience Shirley has had with one of her Arabians. She told us this story: “It was with the Janow-bred stallion Piechur (Banat x Pierzeja by Bandos), a great

race winner and show champion, and maternal grandsire of Ekstern. He was with us for many years. He was such a kind and gentle stallion, and I spent a lot of time with him in his stable, because he was such a lovely horse to be with. Late in his life, as his health was failing, I decided I must let him go. I arranged for the vet to come the next morning, but that evening before was lovely, warm, and soft, so I took him into the little paddock outside his stable to let him stretch his legs and relax. There were lots and lots of swallows flitting around, making lots of twittering calls, and I realized that they were preparing to leave on their great migration to the south. Piechur and I stood close together watching them. He was fascinated by the birds. Every now and again he would turn his head, look at me, and nuzzle me, and lean on me gently. Then he turned and walked slowly back to his stable. The following day all the swallows had left and so had Piechur … “He was the horse which had stolen my heart.” (Story continued on page 29)

“Alfabia Akiabara is a lovely, lovely mare,” says Shirley. “She went to Menton as a two-year-old and won Best Head. She needed a bit of time to mature, so we bred her for a couple of foals, and she suddenly blossomed. She was high-scoring horse and Silver Champion at the recent Strohen show. One of the judges had the biggest smile on his face as he watched her.”

“Ereira brings a smile to your face. We bought her as a broodmare because I love that line, and I had her auntie and her sister. When you say ‘let’s go,’ she leaps into the air like Pegasus. She loves doing it. And she loves herself.”

“Eos moves beautifully,” says Shirley. “There’s always a bit of a sly look in her eye. Her attitude is a bit haughty, as if she’s saying, ‘You know I’m Elandra’s daughter, don’t you?‘ “Her sire Lothar El Nyhl (Nyhl El Jamaal x AF Lissa) is the only stallion I’ve had who made any impression with the Polish mares. He stamps them. When I bought him, I went to see him in the field, and I just walked up to him and he said, ‘How do you do?’ He is a gentleman. And he returned to eating grass. He’s never changed. He’s a lovely, lovely, boy.” Eos’s dam, Elandra, is one of the best Monogramm daughters foaled in Poland. Elandra was second in the Oaks, Poland’s most prestigious race for fillies, as well as Scottsdale Champion and U.S. National Reserve Champion Mare.

Etnologia was part of the first stellar foal crop from Gazal Al Shaqab born at Janow, same as Pianissima. She was Champion at Bialka Spring Show in 2005, following Pianissima who won in 2004. In 2016, Etnologia was European Gold Champion Mare in an emotional prizegiving ceremony that brought former Janow Director Marek Trela into the ring, reunited with the mare he bred and also the handler who used to work at Janów. “Paweł walked her into the ring very slowly, she looked around like a queen, and everyone burst into applause. And THEN he asked her to trot, a performance that made her the high-scoring mare of the show,” remembers Shirley. “There is an ambiance around her. She knows how good

she is. Paweł has known her all his life, and knows to not push her and give her as much time as possible. He knows what those Polish mares need. “I bought her at the 2012 Pride of Poland Auction, and after the breeding parade the next day, we all went to have a look. She was stabled opposite Pianissima. There was a bucket of carrots, and we started to feed them, and that created a dispute. Pianissima was terribly spoiled and she threw a tantrum because she thought that Etnologia was getting more. She threw carrots in the air, she stomped her feet, and Etnologia just smiled and ate another carrot. She is quite aristocratic in her behavior. That’s what I admire about Arab horses … they all have such personalities!”

Biruta was a winner on the track. She is out of the full sister to Batyskaf, who was Derby and Criterium winner as well as Polish National Champion Stallion. “We purchased Biruta at the 2012 Polish auction,” says Shirley. “She’s a good little girl. She’s very easy. Teacher’s pet. Never does anything wrong. As steady as a metronome.”

For the past two years, the Halsdon show string has been based with Paweł Kozikowski, who trains out of a facility that used to be a State Stud for Thoroughbreds in Miejska Górka Poland, west of Warsaw. “For me, there’s no one better. I respect Paweł and his girlfriend, Joanna, so much,” she says. “I had such a terrible time with my mares at the State Studs after the Directors were dismissed, and I thought, ‘I’ll never send them away again.’ But I had that much faith in them. The horses love Paweł, because he loves them. I always think that works!” The ties to Poland are strong for Shirley, whose program is based on Polish blood and features so many famous and important Polish mares, many purchased at the Polish Studs’ auctions over the years. As she says, “There is no sentimental attachment to Poland now. But there is a sentimental attachment to what Poland was. The past. How could there not be? We had such wonderful times. Apart from the incomparable horses, the Poles were such friendly and welcoming people. They were very kind to us. “We were all so privileged to be able to see these great national studs, the greatness of which may never come again.” Shirley shows her mares for the pleasure that she and her husband, Charlie Watts (of Rolling Stones fame), take in seeing their mares perform, and she believes, quite rightly, that others enjoy seeing those beautiful mares, too. “Well, it’s about the horses, isn’t it? They are the stars, I just make it possible for them to go out there ... as long as they come back!” We asked Shirley who she is taking to Aachen, and she replied, “As many as we can! But I do miss the days when there was no backbiting and no one was jealous. We’d have a glass of wine and go down to the ring and look at the horses and celebrate each other’s success.” Shirley may have put her finger on a bit of the spirit that is missing from shows today – the shared joy in simply seeing something so beautiful. In the meantime, we can content ourselves with the knowledge that such horses exist, as do owners who celebrate and share that beauty with all of us, for beauty’s sake.

August Issue Cover Story: A Visit with Shirley Watts Shirley Watts of Haldson Stud speaks lovingly about the horses that touch her soul, and of the glory days of the Polish National Studs, the greatness of which may never come again, by Denise Hearst