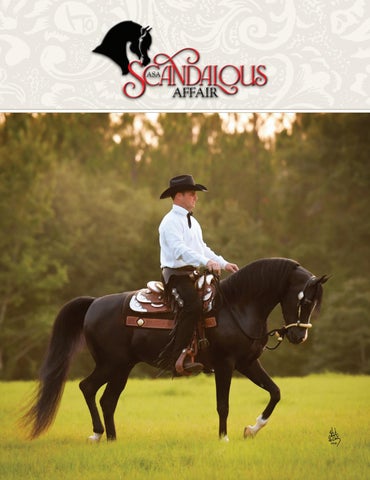 particular stallion on a special mare, we

sister, from Frank Chisholm of Palmetto

imagine and dream of the result. But

Arabians, and bred her to Always A

because all breeding is a genetic roll of

Jullyen V. While she has only produced

the dice, the dream and the reality rarely

one live foal for them, that one foal is the

resemble one another. And while the foal

proverbial home run. And even though

may be wonderful, it may be completely

Sweet Saphire V is a black bay and Always

different than what we had envisioned. I

A Jullyen V is a mahogany bay, together

remember Sheila Varian saying that she

they produced the homozygous black colt

didn’t have a preconceived notion when

homebred colt fulfills the hopes they had for

with what she got. And of course, her

experience allowed her to recognize when she had produced something special.

“Like most little girls, I always dreamed of having a black stallion,” says Kim. “Twenty-

some years ago, I was getting ready to

turn 30, I decided I wanted a horse, and

I announced that I was going to buy one.

An Arabian, of course – you know, we read all the stories when we were little. Nobody believed I would do it, but I did. I bought a two-year-old gelding from a local breeder. I didn’t know much, but he taught me a lot. People helped us along the way. I showed him at the A level. “Then I bought a second Arabian. I was hooked. I never intended to show. I kind of fell into it and did it on my own for a long time. That’s when I decided my ultimate goal is to breed, ride, own and show my own National Champion. ‘Scandal’ might be that one.” “They got to breed their dream horse,” says Melissa Bradshaw, their friend, and former breeding manager for Palmetto Arabians. “It is very different than picking out and then buying your dream horse. In this crazy genetic roll of the dice that is breeding, you rarely get exactly what you want, but this time the stars aligned appropriately. “I met Jim and Kim when they were clients of Palmetto Arabians,” continues Melissa. “They were early in their venture of creating a breeding farm and breeding to Sundance Kid V. Before Frank bought Sundance, he purchased several Sundance daughters and his full sister from Sheila. Because we were breeding so much to Sundance, his sister didn’t fit the program, so eventually she ended up on the Palmetto sales list. I knew she would make a great foundation mare for someone. I trusted Jim and Kim to take great care of her. They were all over it because owning a full sibling to Sundance Kid V is like owning a piece of history. They asked to whom I would suggest breeding her, and since we were already having good success

“They got to breed their dream horse.”

breeding her to Always A Jullyen V, that

normally only breed one or two foals a year,”

was my suggestion. ASA Scandalous Affair

says Kim. “Next year we will have three

foals, which is a lot for us because we do everything ourselves.”

Jim and Kim married in 2009. “My husband was already into horses when we

Their passion for Arabian horses and

met, which happened to be at the funeral

of a mutual friend,” says Kim. “There, he

as bad as I am when it comes to horses. In

saw a picture of me riding a Half-Arab

pinto. Turns out he used to ride a pinto,

when I show, so I told him go find something

too. I wouldn’t sell him my horses, so he

to do. So he went and found something to

said he had to marry me! One of the first

do. Later that evening we were watching

Arabian events I took him to was an open

the costume class and he said, ‘If you

house at Dolorosa. When we were walking

were going to pick a horse in this class which

through the barn, there stood Always A

one would it be?’ I said, ‘That one right

Jullyen V in the crossties. He said, ‘I want

there, he is smokin’ hot. And if he doesn’t go

THAT!’ So it’s ironic that we now stand

a son of his.” Theirs is a small farm, and

your butt.’ He said ‘OK, I’ll see you later at the

because they are hands-on owners, they

barn party.’ I didn’t know that he had already

only produce a couple of foals a year. “We

bought that horse for me - EQ Escalade.

“We enjoy competing in various disciplines, but primarily we like the western divisions. When we go to shows, that’s our vacation, and we want to have a good time with happy horses. We don’t push them. We know our trainer, Dale Brown, is taking his time with Scandal. I am allowing Scandal to gain knowledge and hone his skills through the AWPA class and am very excited about the opportunity to begin riding him in November.” “It is exciting that the Blevinses are relatively new and that they are so serious about breeding and making a contribution to the Arabian breed,” says Dale. Like other successful owners, the Blevinses understand the importance of trusting their trainer and allowing him the room to do the best possible job for them. “Dale is doing a great job with all of our horses,” says Kim. “It’s not all about winning.” Melissa Bradshaw agrees and says, “I’m excited that they are using Dale Brown for their western training. Kim is an amateur rider, and they are producing some very nice western horses, so Dale is a good fit.”

“My ultimate goal is to breed, ride, own and show my own National Champion. ‘Scandal’ might just be that one.”

“When he was born he wasn’t that mousy color,” says Kim. “He was black from the get-go. He was born in a snowstorm, so of course he needed a ski hat.”

Horse mare to him that I think will produce

impressive stallion with the look that is

something special,” adds Dale. “And Frank

most rewarded in the Arabian show ring.

Chisholm bought a breeding, and I’m sure

“He has a really current, fancy style about

he will breed something good to him.”

crossover who continues the Varian legacy.

great deal of thought into how she will

The Blevinses used a proven program in

breed her horses. “We are trying to breed

the Varian lines and bred their own great

horse. His are valued bloodlines, but with a

about breeding decisions a lot because we

don’t have that many chances. We have a

Jim and Kim are collecting a small

group of mares that they think will cross

because Dale wanted to get some foals

well with their special colt. They bought

on the ground for people to see. Based

a *Khadraj NA daughter out of a Fame

on Scandal’s bloodlines there is no reason

VF daughter, and they have a mare that

that he should not sire nice foals. We have

Premier x Two Plus Samantha) who was

A Jullyen V speaks for himself. And with his

the dam of National Champion Western

dam being a full sister to Sundance, we’re

really excited about the future.”

his presence and his beauty. As he’s maturing, he’s getting even prettier.

“In this crazy genetic roll of the dice that is breeding, you rarely get exactly what you want, but this time the stars aligned appropriately.”

“I love him,” she adds. “He’s my dream horse. I never dreamed that I would ever have a black stallion. And one that people want to breed to! Every time I see Frank and Sara Chisholm, I thank them for making my dreams come true. Just owning him is a big deal for us. I don’t know how to explain it, but just owning him makes me happy.” A great horse will do that.

Dr. James Blevins and Kim Butler of Alistar Arabians, rolled the dice and got the answer to their dreams, by Gary Dearth. Published in the Jun/July issue of Arabian Horse World