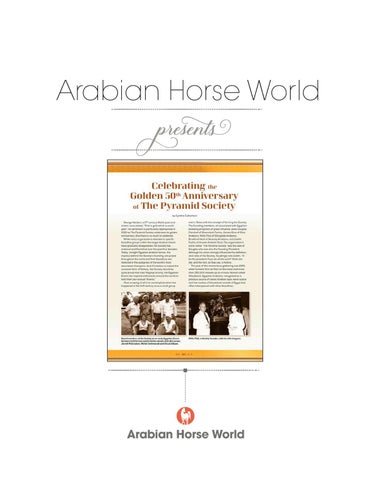 Celebrating the Golden 50th Anniversary of The Pyramid Society by Cynthia Culbertson George Herbert, a 17th century Welsh poet and orator, once stated, “That is gold which is worth gold.” His sentiment is particularly appropriate in 2019 as The Pyramid Society celebrates its golden anniversary. And there is so much to celebrate. While many organizations devoted to specific bloodline groups within the larger Arabian breed have gradually disappeared, the Society has endured and flourished over the past five decades. Today, straight Egyptian Arabian horses, the impetus behind the Society’s founding, are prized throughout the world and their bloodlines are featured in the pedigrees of the world’s most decorated champions. And if imitation is indeed the sincerest form of flattery, the Society should be quite proud that their flagship activity, the Egyptian Event, has inspired enthusiasts around the world to hold their own annual “Events.” Most amazing of all is to contemplate what has happened in the half century since a small group

met in Texas with the concept of forming the Society. The founding members, all associated with Egyptian breeding programs of great influence, were Douglas Marshall of Gleannloch Farms, James Kline of Kline Arabians, Willis Flick of Glenglade Arabians, Bradford Heck of Serenity Arabians, and Judith Forbis of Ansata Arabian Stud. The organization’s iconic name “The Pyramid Society” was the idea of Douglas who was also the founding President. Although his vision strongly influenced the definition and rules of the Society, he jokingly told Judith, “I’ll be the president if you do all the work!” Work she did, and the rest, as they say, is history. The year of this momentous gathering was 1969, when humans first set foot on the moon and more than 350,000 showed up at a music festival called Woodstock. Egyptian Arabians, recognized as a precious source of classic Arabian type, were scarce and the nucleus of bloodstock outside of Egypt was often interspersed with other bloodlines,

Board members of the Society at an early Egyptian Event: Barbara Griffith and Judith Forbis seated, with Bill Larsen, Jarrell McCracken, Walter Schimanski and Chuck Gibson.

Willis Flick, a Society founder, with his wife Imogene.

particularly in the United States. Thus, the Society’s mission was to define the “straight” Egyptian and to preserve, promote, and perpetuate this unique bloodline group. The first Egyptian Event, a mutual concept of Lee Cholak and Judith Forbis, was held in 1981 to showcase and celebrate these unique Arabians. By that time straight Egyptians in the U.S. had garnered an astonishing number of National Championships and were becoming highly sought after by discriminating breeders, both as a distinct breeding group and as an outcross with other bloodlines. Today, in 2019, you might not be able to set foot on the moon, but you can book a flight to outer space. Your phone is “smart” and Facebook, Google, and Uber are not only multi-billion dollar companies, but words used as verbs in almost every language. Yet despite these astonishing changes in the world at large, as well as monumental changes in the

world of Arabian horses, The Pyramid Society is still here. Straight Egyptian Arabian horses are found from China to Chile, across Europe, and throughout the traditional homelands of the breed. Society members, growing from that small group in the United States, are now found around the world, with Life Members alone representing fourteen countries. An area of paramount importance to the Society is education, as manifested in the many books published under its auspices, including thirteen Reference Handbooks and its Stud Book, as well by hosting many breeder’s conferences and educational lectures of interest to breeders worldwide. Current Society President Rebecca Rogers also notes that the Society has been a leader in the show world on humane standup and cosmetic (continued on page 86)

Remembering when... As The Pyramid Society’s signature activity, the Egyptian Event has been an important occasion for devotees of the Egyptian Arabian breed since its inception in 1981. On the following pages are some of the special horses and people who took part in shaping The Pyramid Society and the Event in its early days. We hope you enjoy these images as they appeared in Arabian Horse World’s coverage of the 1981 and 1982 Events.

The huge blue tent served as both the sale arena and lecture hall. Ten straight Egyptian mares and fillies, representing the best from ten separate farms, were auctioned for over two million dollars on Saturday night before a packed house. During the day, Jarrell McCracken, Judi Forbis and Walter Schimanski moderated a series of lectures.

Each day the straight Egyptian stallions were presented in a Parade in the main arena – here are *SAKR (owned by Gleannloch Farms, TX), right, and his son SAKR AL MAHRISI (owned by the Bogrens of TX).

Polly Knoll, the photographer for our Egyptian Event coverage, is shown here with Jim Panek.

A unique judging system at the Egyptian Event. Being judged: MIRADON ZAARAFA, shown by Richard Laird of Whispering Winds Farm in Ohio. Various qualities of each horse were scored numerically and immediately displayed. The winner – the horse with the highest total points.

Tammen and Patrick Swayze at the Egyptian Event.

“THE EGYPTIAN EVENT WAS A MUCH-NEEDED TIME OF SHARING, FELLOWSHIP AND SUPPORT IN THE RECOGNITION OF THE PRESERVATION OF THIS MOST PRECIOUS AND RARE ARABIAN BLOOD MUST BE A COOPERATIVE EFFORT. COMPETITION IN THE BREED IS IMPORTANT BUT COOPERATION AMONG BREEDERS IS ESSENTIAL IF THE LIVING TREASURES OF TODAY ARE TO ENDURE FOR FUTURE GENERATIONS.” — Lee Romney, Somerset Farms Rhita McNair of Gleannloch Farms shares her Pepsi with IBN MORAFIC.

top right : Tanya Hawley, left, compiler of The Arabian Horse in Australia, and owner of the only Aswan get, Naadirah, in Australia, and Marion Richmond of Simeon Stud, right, whose bloodlines are mainly Egyptian and Egyptian cross. bottom left : Stanley White, Sr., Ocala, FL, well known trainer of many champions, founded Grandeur Arabian Farm with his wife Kitty. This photo is a White Family portrait: left to right, Loralyn and Steve, partners with Stanley, Sr., in Ocala, then Kitty and Stanley, their stallion MAKHSOUS, and on the right, Stanley, Jr., and Sara, trainers at Brentwood. In 1982, this family won four out of the six performance classes, plus a second in another, as well as the three-yearold colt class.

guidelines. “The Pyramid Society was the first to institute the Ginger Test,” she states, “and we also developed comprehensive guidelines for a Humane Standup and strictly enforce the cosmetic rules for showing at our annual Egyptian Event.” When The Pyramid Society was formed, who might have guessed that during the following decades, despite being fewer than 10 percent of the total Arabian population, straight Egyptians would have won 18 World Championships and 14 Reserves in the ensuing years, or that in 2018 alone both Bronze Senior World Champions would be straight Egyptian, and that every single Gold, Silver and Bronze World Champion featured Egyptian bloodlines in their heritage.

Judith Forbis, the only remaining founder, reflects on what it means to see the Society reach the milestone of its 50th Anniversary. She recalls that the initial concern was “saving” the Egyptian Arabian in the United States, where there were few horses tracing entirely to the early Egyptian imports, and only the Babson Farm was keeping the bloodlines intact. There can be no doubt that this goal was soon “mission accomplished” as many breeders joined the Society to promote and perpetuate these horses. A Pyramid Society Europe was also formed with a similar vision and mission regarding the Egyptian Arabians in Europe. “Fifty years later, I think it is astounding to see that all has come full circle,” says Judith. “We were thrilled

A DEBT OF GRATITUDE IS OWED TO THE FOUNDERS, TRUSTEES, PAST OFFICERS AND DIRECTORS, AS WELL AS TO THE MANY MEMBERS AND SUPPORTERS IN THE U.S. AND AROUND THE WORLD, FOR THE PASSION AND DEDICATION THAT HAVE LED TO THIS SIGNIFICANT 50-YEAR MILESTONE FOR THE PYRAMID SOCIETY.

off in Scottsdale, the celebration will culminate at the 38th ANNUAL EGYPTIAN EVENT in Lexington, Kentucky, August 28-31. The theme of the Event honors the

to see straight Egyptian breeding being sustained in the United States, but today it is inspiring to witness the Egyptian Arabian thriving again in Egypt with new breeders and great enthusiasm.” She also points to the proliferation of the straight Egyptian in the Arabian Gulf countries as success beyond the founders’ wildest expectations. “We all believed in the Egyptian Arabian as the ultimate embodiment of classic type,” she states, “but in many cases the breeders who embraced these horses in the past two decades have exalted the standard.” Thanks to all of the people who have ensured the longevity and success of The Pyramid Society. Over the decades, countless breeders and enthusiasts, united in their passion for the straight Egyptian Arabian, have given generously, not only to support the Society’s mission, but also to ensure the organization was devoted to leadership and innovation within the Arabian horse community. It is a golden time to celebrate!

50th anniversary, with photo displays, a silent auction of Society memorabilia, and lectures on the influence of the Society and the straight Egyptian Arabian over the past five decades. There will also be a special section of the Event Show Program devoted to the Anniversary. Then, on Friday evening, there will be a wonderful celebration of the 50th at the Embassy Suites hotel. Champagne toast anyone? And don’t be surprised by a surprise or two at the Event’s finale on Saturday evening. Everyone is invited to “Go for the Gold” and join us in Kentucky! Find out more: www.pyramidsociety.org/egyptian-event

Celebrating the Golden 50th Anniversary of the Pyramid Society

Celebrating the Golden 50th Anniversary of the Pyramid Society, by Cynthia Culbertson