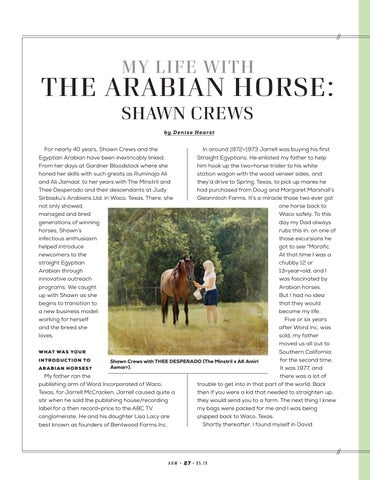 THE ARABIAN HORSE: SHAWN CREWS b y De n is e He a rs t

For nearly 40 years, Shawn Crews and the Egyptian Arabian have been inextricably linked. From her days at Gardner Bloodstock where she honed her skills with such greats as Ruminaja Ali and Ali Jamaal, to her years with The Minstril and Thee Desperado and their descendants at Judy Sirbasku’s Arabians Ltd. in Waco, Texas. There, she not only showed, managed and bred generations of winning horses, Shawn’s infectious enthusiasm helped introduce newcomers to the straight Egyptian Arabian through innovative outreach programs. We caught up with Shawn as she begins to transition to a new business model: working for herself and the breed she loves.

In around 1972-1973 Jarrell was buying his first Straight Egyptians. He enlisted my father to help him hook up the two-horse trailer to his white station wagon with the wood veneer sides, and they’d drive to Spring, Texas, to pick up mares he had purchased from Doug and Margaret Marshall’s Gleannloch Farms. It’s a miracle those two ever got one horse back to Waco safely. To this day my Dad always rubs this in: on one of those excursions he got to see *Morafic. At that time I was a chubby 12 or 13-year-old, and I was fascinated by Arabian horses. But I had no idea that they would become my life. Five or six years after Word Inc. was sold, my father moved us all out to W H AT WA S YO U R Southern California INTRODUCTION TO for the second time. Shawn Crews with THEE DESPERADO (The Minstril x AK Amiri Asmarr). ARABIAN HORSES? It was 1977, and My father ran the there was a lot of publishing arm of Word Incorporated of Waco, trouble to get into in that part of the world. Back Texas, for Jarrell McCracken. Jarrell caused quite a then if you were a kid that needed to straighten up, stir when he sold the publishing house/recording they would send you to a farm. The next thing I knew label for a then record-price to the ABC TV my bags were packed for me and I was being conglomerate. He and his daughter Lisa Lacy are shipped back to Waco, Texas. Shortly thereafter, I found myself in David best known as founders of Bentwood Farms Inc.

FOR THE NEW ENTHUSIAST

Gardner’s office at Bentwood Farm. He explained to me that the last thing he wanted was to hire a client’s kid, but lucky for me, David knew and liked my father. I was no quick study, and a number of years went by before David considered me his right hand. When David and Marion left Bentwood to begin Gardner Bloodstock, I went with them. Not long after, David ‘rocked’ with Ruminaja Ali and Ali Jamaal at the U.S. Nationals. It was an exciting time. I was Jamaal’s groom, and I had a taste of having a horse in my charge winning a unanimous National Championship. Nothing like it! Parting with Jamaal was so difficult. This was also about the same time that David sold his interest in Ruminaja Ali. So it was a quiet time at Gardner Bloodstock when a new Brazilian breeder, Mr. JP Martins (who, sadly, passed away about six months ago), asked me to show his National string and help train and encourage his staff. I was in Brazil for four months and made ten trips to Mr. Martin’s after that.

Together we won many National Championships for Haras Serhandino. While I was in Brazil, The Minstril was born. I never heard David so confident and excited. I could not wait to get home; that colt was a game changer from day one. The Gardners were good friends with Jim and Judy Sirbasku. Together, Jim and David came up with the concept for Arabians Ltd., and they went on to co-found the new innovative company that introduced so many to the joys of Arabian horse ownership. H O W D I D YO U K N O W T H AT T H I S H O R S E B E L O N G E D I N YO U R L I F E ?

In 1989 Thee Desperado was born. I was head over heels in love with him. I had been “doing horses” for about twelve years by then, but he “had me at hello.” He’s the one who made me know I would do this for my lifetime. I’d had the luxury of learning from

Shawn with THEE DESPERADO as a two-year-old.

Shawn at the Gulf Straight Egyptian Arabian Cup in Dammam, pictured with a two-year-old colt by Ansata Nile Echo out of Thee Scarlet Rose RCA.

FOR THE NEW ENTHUSIAST

Shawn with one of her favorite Thee Desperado daughters SAFINA RCA (out of *MB Isheena), bred by Judy Sirbasku, and owned by Mr. Ayad Thuwainy.

the very best and seeing and knowing more straight Egyptian horses than many do in their lifetimes. I knew he was the best I had ever seen, and was ready to roll on with this colt all the way. I loved every minute of those beautiful twenty-four years. SHAWN, PLEASE BRING US UP TO DATE ON THE TRANSITIONS THAT ARE UNFOLDING AT ARABIANS LTD. AND YOUR PLANS FOR THE FUTURE?

Many of you know that in March 2019, after nearly forty years, I retired from Arabians Ltd. Judy is a great lady. She gave me her very best horses to show, knowing how difficult it was at that time for a young lady to break into the winners’ circle. We have had some of the highest highs and lowest lows together … and a lot of funny experiences in between. With much of the “Treasures Sale” plans well underway and Judy’s announcement that, except for her world class Stallion Program, the service arms of Arabians Ltd. will cease on December 31. It was evident to Judy and me that I could accomplish more for more people from outside of my Arabians Ltd. office and position, on my own, as at this time Judy’s

and the farm’s focus needs to be on her mares. Having said all that, I am not going far. My own farm is less than five minutes from Arabians Ltd., and backs up to the old Bentwood Farm property. I have not put it to use in years, and it feels good now to spend time working on my own barn and pastures. I am laying the groundwork for a new business, there’s a lot yet to unfold, but having my hands on extraordinary horses is key. This morning I thought of something that David Gardner used to say: “All the great experiences that happen to people in the horse business, whatever the breed or discipline, happen to those who have the highest quality horses.” As a young trainer, I learned that if I helped a person find a rare and special horse, chances were that client would entrust me to manage, show, and breed that horse. For me, that’s still what it’s all about. I am grateful to Judy and to all of you who entrusted me with their best. I am more excited about the future than ever. Many thanks also to the team at Arabian Horse World, who shared our stories with the world for so many years.

My Life with the Arabian Horse: Shawn Crews

My Life with the Arabian Horse: Shawn Crews, by Denise Hearst